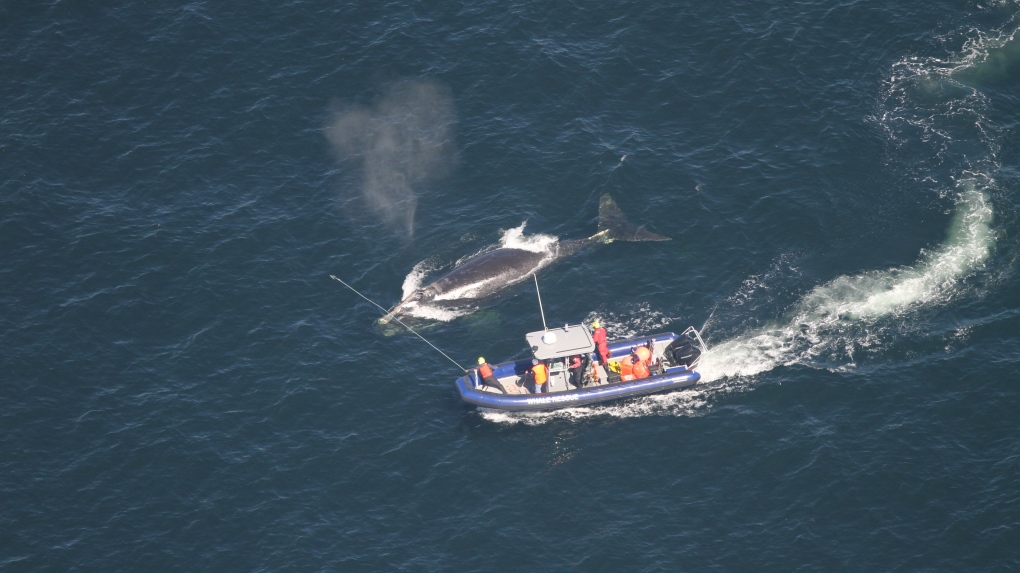 Crew members attempt to disentangle a whale in the Gulf of St. Lawrence in a handout photo. (Alison Ogilvie, NOAA Fisheries)

ETANG DU NORD, Que. -- The Department of Fisheries and Oceans says its surveillance aircraft spotted another entangled North Atlantic right whale in the Gulf of St. Lawrence, this time off the coast of the Iles-de-la-Madeleine.

The entangled whale was seen in a remote location and the department is working to assess options for disentanglement.

"Oh my. Hopefully they can rescue this guy or gal," said Gretchen Fitzgerald, national programs director for the Sierra Club Canada Foundation.

So far four whales have been found entangled in ropes in the last month.

One of the whales was spotted by the Canadian Coast Guard east of Miscou, N.B., with a rope around its tail, apparently dragging something heavy.

Two others were detected a few days later -- one east of Gaspe, Que., and the other east of Miscou.

About two weeks ago, federal fishery officers and the Canadian Coast Guard removed 101 lost snow crab traps from the Gulf of St. Lawrence as part of efforts to protect the endangered North Atlantic right whale.

The Fisheries Department said the "ghost gear" removal occurred over three days and also took more than nine kilometres of rope from the water.

Fitzgerald said preventing the release of ghost gear is a really important part of helping these whales.

"People are familiar with plastic bottle return -- little deposits you get back when you bring back plastic bottles. Well the same could be applied to fishing gear and people who sell gear, so that they are responsible for getting as much gear back out of the water as possible," she said.

"So, there's incentive to use less gear to begin with because it is putting a price on that, but also to bring it back."

Long-term solutions can include, among other things, figuring out if there is a way to have less gear out there in the water and having ropeless gear, she said.

A federal study said the measures taken to prevent the mammals, numbering about 400, from being hit by ships and getting caught in fishing gear may not be enough to keep them from being hurt or killed in Atlantic waters.

"The logistics of helping the entangled ones are very complicated," he said.

Joe Gaydos with the SeaDoc Society out of the University of California, Davis, had said long-term solutions to reduce entanglement like the static zone and changes in fishing gear confirmation are essential to the survival of these whales.

This is a corrected story. In a previous version, the Department of Fisheries and Oceans  said the whale was seen northeast of Etang du Nord harbour.@