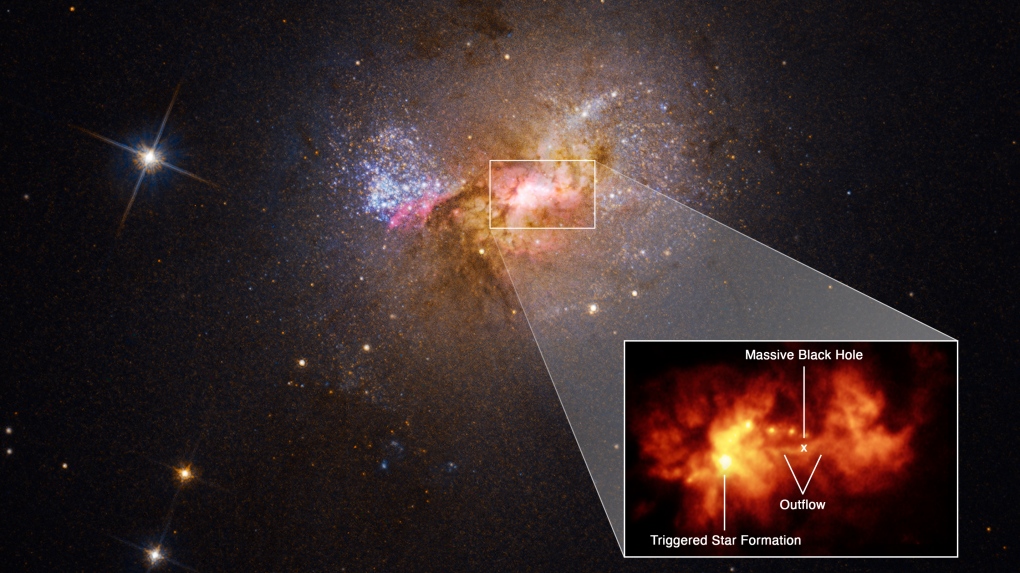 In a twist, astronomers using the Hubble Space Telescope have discovered that these energetic celestial objects have a nurturing side, too.

Hubble's observation of a dwarf starburst galaxy, called Henize 2-10, revealed a gaseous umbilical cord stretching from a black hole at the center of the galaxy to a stellar nursery where stars are born.

A dwarf starburst galaxy is a small galaxy with an intense amount of star formation.

Star birth requires a dense cloud of gas and dust. The stream of gas provided by the black hole actually triggered a fireworks show of star birth as it interacted with the cloud, which led to a cluster of forming stars.

The galaxy is located 30 million light-years away in the Pyxis constellation. While large galaxies are known to contain a supermassive black hole at their center, galaxies like Henize 2-10 have caused astronomers to debate if the same is possible in smaller-scale cosmic settings.

Compared to the massive Milky Way galaxy and its billions of stars, Henize 2-10 only has about a tenth of the stars.

"From the beginning I knew something unusual and special was happening in Henize 2-10, and now Hubble has provided a very clear picture of the connection between the black hole and a neighboring star forming region located 230 light-years from the black hole," said study author Amy Reines, an assistant professor in the department of physics at Montana State University, in a statement.

The findings published Wednesday in the journal Nature. As a graduate student, Reines also coauthored a 2011 study revealing the first evidence for a black hole in the galaxy.

The outflow of gas from the black hole was moving about a million miles per hour when it slammed into the dense gas cloud and then spread out. New clusters of stars can be seen flourishing along its path.

It's a rare case of a black hole helping stars to form, rather than tearing them apart. In large galaxies, black holes spew out superheated jets of material that nearly reach the speed of light. Any gas clouds unfortunate enough to be in the way of these jets would become so hot, they wouldn't be able to cool down enough to form stars.

The smaller black hole inside of dwarf galaxy Henize 2-10 is releasing material at a much slower and gentler speed, creating just the right conditions for star birth.

Studying dwarf galaxies, or those that have remained small over time, could help astronomers discover how supermassive black holes came to exist early on in the history of the universe.