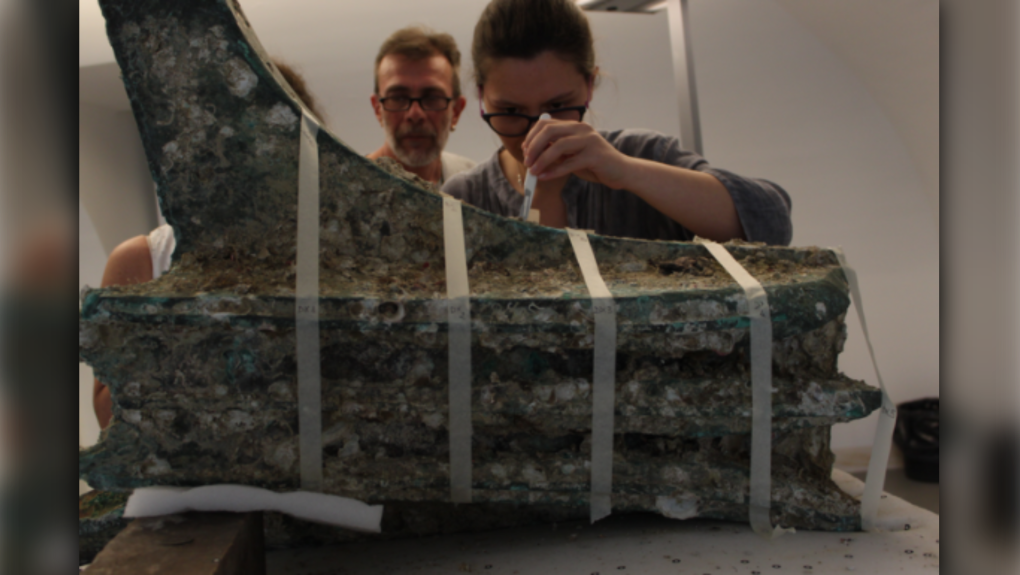 The first study of marine life on an ancient shipwreck in the Mediterranean found the ship home to more than 100 underwater species, giving researchers an insight on how marine life build stable colonies over decades on archeological artifacts.

A sea battle on March 10, 241 BCE off the northwestern coast of Sicily near the Aegadian Islands saw a fleet equipped by the Roman Republic destroy a fleet from Carthage, ending the First Punic War in Rome’s favour, according to a release.

In a study published in the journal Frontiers in Marine Science, researchers examining the shipwrecked remains of a Carthaginian galley from the historical battle found 114 species of marine animals coexisting in a “complex community” on the galley’s bronze ram.

Ancient sea battles often involved battling ships ramming into one another in order to sink the opposing side or to board the other ship to engage in hand-to-hand combat. Rams, often cast of different metals, were placed on the front bow of ships to aid in creating as much damage as possible in the strike.

“Shipwrecks are often studied to follow colonization by marine organisms, but few studies have focused on ships that sank more than a century ago,” said lead study author Sandra Ricci in the release. “Here we study for the first time colonization of a wreck over a period of more than 2,000 years. We show that the ram has ended up hosting a community very similar to the surrounding habitat, due to ‘ecological connectivity’ – free movement by species – between it and the surroundings.”

The ship’s ram was recovered in 2017 from the seabed around 90 metres down, and nicknamed “Egadi 13.” It consists of a single, hollow piece of bronze that is engraved with Punic inscriptions that are so far undecipherable, the study notes. It is about 90 centimetres long, five centimetres thick at the front edge and weighs 170 kilograms or approximately 375 pounds.

The find was cleaned and restored in 2019, and as part of the restoration process, all marine animals living in and on the ram were collected along with hardened biological materials and blocks of sediment. Those samples were then studied, comparing the species on the ship’s ram with those found in natural Mediterranean habitats, reconstructing how the ram had been colonized over the years.

The researchers found 11 living invertebrate species, including 33 species of gastropods (snails and slugs) 33 species of polychaete worms (marine worms with bristles along their bodies) and 23 species of bryozoans (commonly referred to as “moss animals,” invertebrates with tentacles who filter feed).

That collection of species is most commonly found in shallow-water habitats, well-lit sea beds, coralligenous reefs and in seagrass meadows, the study says.

“We deduce that the primary ‘constructors’ in this community are organisms such as polychaetes, bryozoans, and a few species of bivalves. Their tubes, valves, and colonies attach themselves directly to the wreck’s surface,” said study co-author Dr Edoardo Casoli in the release. “Other species, especially bryozoans, act as ‘binders’: their colonies form bridges between the calcareous structures produced by the constructors. Then there are ‘dwellers’, which aren’t attached but move freely between cavities in the superstructure. What we don’t yet know exactly is the order in which these organisms colonize wrecks.”