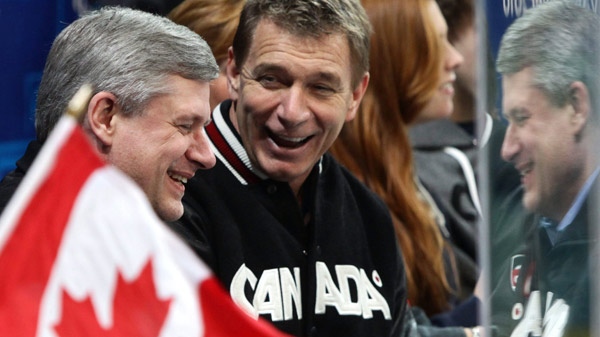 VANCOUVER - The Man in Motion isn't about to become Canada's next governor general just yet.

Erin McMillan was responding to a report in a Toronto newspaper that said Prime Minister Stephen Harper was actively seeking a replacement for Michaelle Jean, whose five-year term -- which began in September 2005 -- Harper has decided not to extend.

The prime minister's office declined to comment on the report, in which the Star quoted an unnamed source as saying that Hansen has been approached about taking the job, but that he wasn't interested.

"He essentially has not been given the opportunity to accept, decline or even consider . . . the role," said McMillan, who speaks on behalf of the Rick Hansen Foundation.

There has been speculation for years about Hansen taking on the job of the governor general.

"His response has always been that he's very honoured, really flattered that Canadians would consider him for such a position in our country," McMillan said.

"Currently, he continues to focus on the mission and the work of the foundation, the launch of the Rick Hansen Institute, celebration of our 25th anniversary, and of course, his family."

Hansen put spinal cord injuries on the public agenda 25 years ago with his Man in Motion wheelchair world tour, and is reportedly intent on continuing his life's work of raising money for spinal cord research.

He was not available for comment over the Easter long weekend due to family commitments.

Last month, Hansen played a starring role in the opening ceremonies for Canada's first Paralympics as his life story unfolded on a giant wraparound screen before he took the stage. In February, he was one of the five final torchbearers at the 2010 Winter Olympics.

But Hansen isn't the only big name being bounced around for the job.

The Star also reported that John de Chastelain, a former chief of defence staff and Canadian ambassador to the United States, is on Harper's short list of candidates to succeed Jean.

There has also been speculation in the past that Inuit leader Mary Simon, president of Inuit Tapiriit Kanatami, could replace Jean as the first Inuk to take the post.

On the Internet, cyber campaigns are promoting Reform Party founder Preston Manning for the job.

A Facebook group set up in early March has already drawn nearly 400 fans with a tagline that says, "there is not a better Canadian for the job then Preston Manning."

Another Facebook page is touting actor William Shatner as the ideal candidate for the post. Shatner's page, set up in late March, had more than 600 fans. But a similar online campaign last year ground to a halt when the man best known for his role as Captain James T. Kirk in the Star Trek series sent in a letter saying he wasn't interested in the job.

The Monarchist League of Canada has also opened the floor for suggestions on it's own Facebook page with posts suggesting everyone from hockey great Wayne Gretzky to retired general Romeo Dallaire as contenders for the position.

The job of Governor General has been turned down in the past.

Hockey legend and former captain of the Montreal Canadiens Jean Beliveau turned down the position in 1994.

Le Gros Bill, as he was called, declined the vice-regal role to stay closer to his family.

The post, with Jean working it, has increasingly included forays into social commentary.

In February Jean strayed from her ceremonial functions to make a series of pointed criticisms about capitalism to an audience at McGill University.

She encouraged young people to aim for more than just profits in a speech that championed other values like social justice, the arts and civic involvement.

Jean also made headlines across the country last year in a graphic gesture of support for Inuit seal-hunters as she carved up a carcass and chowed down on a seal's raw heart in a community feast.