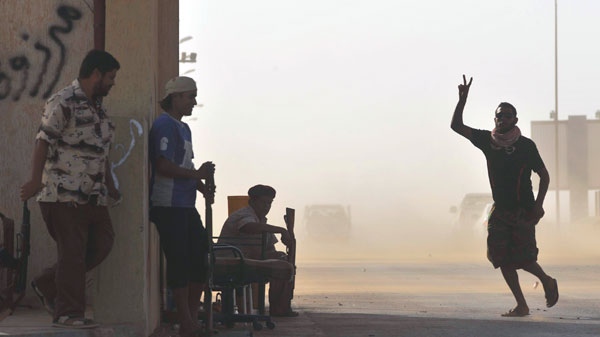 SIRTE, Libya - Hundreds of civilians fled Moammar Gadhafi's hometown Monday to escape growing shortages of food and medicine and escalating fears that their homes will be struck during fighting between revolutionaries forces and regime loyalists.

Anti-Gadhafi fighters launched their offensive against Sirte nearly two weeks ago, but have faced fierce resistance from loyalists holed up inside the city. After a bloody push into Sirte again over the weekend, revolutionary fighters say they have pulled back to plan their assault and allow civilians more time to flee.

NATO, which has played a key role in decimating Gadhafi's military during the Libyan civil war, has kept up its air campaign since the fall of Tripoli last month. The alliance said Monday its warplanes struck eight military targets near Sirte a day earlier, including an ammunition and vehicle storage facility and rocket launcher.

Sirte, 400 kilometres southeast of Tripoli on the Mediterranean coast, is one of the last remaining bastions of Gadhafi loyalists since revolutionary fighters stormed into the capital last month, ending Gadhafi's rule and sending him into hiding. The fugitive leader's supporters also remain in control of the town of Bani Walid southeast of Tripoli and pockets of territory in the country's south.

Eman Mohammed, a 30-year-old doctor at the city's central Ibn Sina Hospital, said the facility was short on most medicines and no oxygen in the operating rooms. She said most days, patients who reach the hospital find no one to treat them because fuel shortages and fear keep staff from coming to work.

She said many recent injuries appear to be caused by revolutionary forces. "Most of the people killed or injured recently are from the shelling," she said.

Forces on the city's outskirts fire tank shells, Grad rockets and mortars toward the city daily with little more than a general idea of what they are targeting. NATO, meanwhile, is operating in Libya under a mandate to protect civilians.

Mohammed, who is from the Warfala tribe that has traditionally supported Gadhafi, said most of the fighters in the city are armed volunteers fighting for personal reasons.

"There is a bloody aspect to it," she said, standing at a rebel checkpoint outside the city. "Many people died in the battlefield as martyrs, so their relatives are angry. It doesn't have to do with Gadhafi anymore. It's more about revenge than about anything else."

She said she didn't expect the fighters to surrender easily.

"It is just simple resistance, just those who lost relatives or who are defending their homes," she said.

Others said they also felt endangered by the fighting.

"We got scared for our children," said Amir Ali, 40, who ran a metal workshop in the city for years. He fled with his five when they felt the explosions they heard outside got too close to their home.

"It comes from both sides," he said. "I have no idea what kind of weapons they are, but it's all heavy stuff."

He said the shortages keep many people who would like to flee from getting out.

"There are many people inside who don't have cars to leave or can't get gas," he said. "Others don't want to leave."