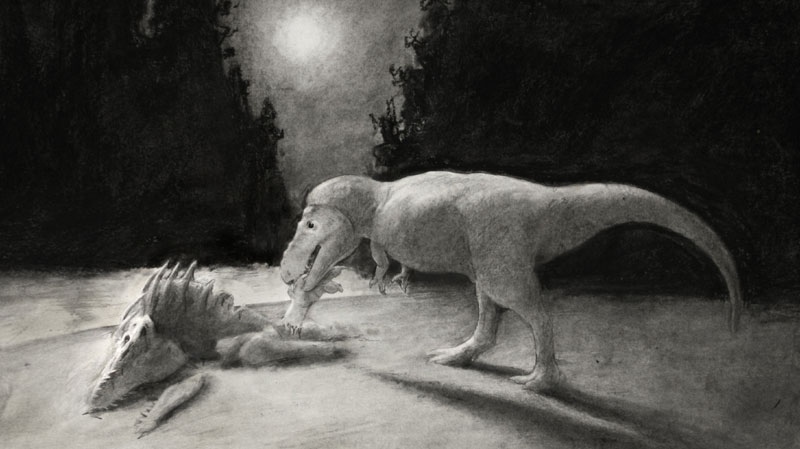 As if the king of dinosaurs didn't have enough of a bad-boy reputation, researchers say they have found evidence that the Tyrannosaurus rex was also a cannibal.

They have located marks on T. rex fossil bones that could logically have only been made by the jaws of a fellow Tyrannosaur.

Nick Longrich, a post-doctoral researcher at the Yale Institute for Biospheric Studies, was working on a separate study of dinosaur bones when he found teeth marks on a 65-million-year-old T. rex fossil.

His first conclusion was that the marks came from a large carnivorous dinosaur.

But after thinking about it further, Longrich realized "there was only one big carnivore" in western North America during that time period, he explained to CTV.ca in a telephone interview.

And that was the T. rex, the big bad dinosaur whose Latin name means the "king of the tyrant lizards," which to this point was not known to be a cannibal.

After combing through a few dozen T. rex bones in other museums, Longrich kept "running into more and more of it."

In total, Longrich ended up finding three foot bones and one arm bone that showed evidence that the T. rex was a cannibal.

He said that's a significant number, considering there are only 20 or 30 complete T. rex skeletons in museums around the world.

"It's surprising how frequent it appears to have been," Longrich said in a statement that accompanied the release of his study on Friday. "We're not exactly sure what that means."

Working with three other dinosaur experts, Longrich published a study in the journal PLos ONE that analyzed the findings.

The researchers say the teeth marks on the T. rex bones definitely resulted while the beasts were feeding. But what is unknown is whether a Tyrannosaurus would find a dead T. rex and eat it, or devour its prey after a fight to the death.

Longrich told CTV.ca that both cases could have occurred, though one of his fellow researchers believes that scavenging is the more likely T. rex behaviour.

John Horner of Montana State University, who was the technical adviser for the "Jurassic Park" films; Gregory Erickson of Florida State University; and Philip Currie of the University of Alberta also worked on the study.