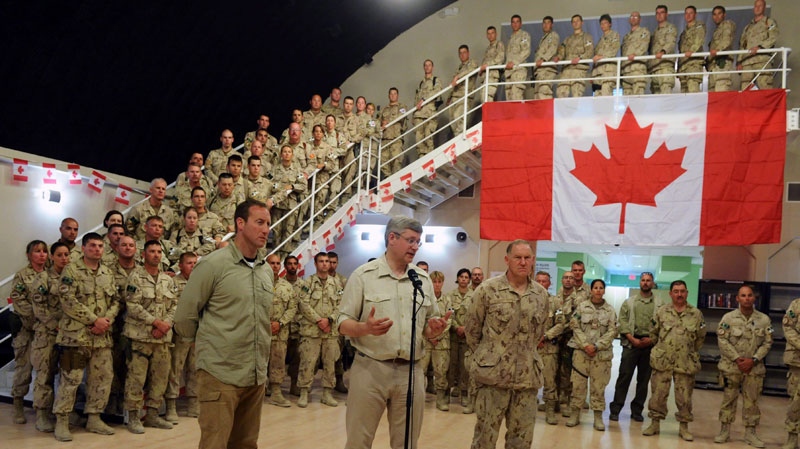 Prime Minister Stephen Harper, middle, talks to media as he is flanked by Chief of the Defence Staff Walter Natynczyk, right, and Minister of Defence Peter MacKay, left, after delivering a speech to Canadian soldiers an civilian at New Canada House at Kandahar Air Field in Afghanistan on Monday, May 30, 2011. Sean Kilpatrick / THE CANADIAN PRESS

CTV News obtained an internal report by Lt.-Gen. Andrew Leslie, which includes dozens of recommendations that would purportedly save the Department of National Defence $1 billion.

The report argues that budget cuts need to be made in such a way as to ensure that soldiers on the front lines have the resources they need.

On the bureaucratic side of the department, however, the report suggests eliminating or reassigning as many as 11,000 personnel -- particularly from National Defence headquarters in Ottawa.

The report was completed in July and has not been released publicly, but copies were leaked to media outlets on Friday.

There is no word on whether Ottawa will implement the recommendations. However, CTV's Mercedes Stephenson said they could make it politically easier for the federal government to slash military spending.

National Defence, like many other government departments and agencies, is undergoing a so-called "strategic review" aimed at cutting budget spending by five to 10 per cent.

"What this report essentially allows them to do politically… is to find places to cut that people don't get angry about," Stephenson reported Friday.

"People get very angry when you take bullets or bullet-proof vests off of soldiers," she said. "They don't really get angry when you say ‘we're going to cut some generals at headquarters, or some contractors.' It's politically an easier sell."

But Leslie has hinted in the past that cutting spending at National Defence headquarters will face internal resistance.

"Nothing will defend itself so vigorously, much akin to a wounded badger, as an HQ that is threatened with being shut down," he reportedly said at a defence conference in Ottawa earlier this year.

Leslie was head of the army until last June, when he was appointed chief of transformation, an advisory role meant to help the military adjust to operations in the wake of the Afghan combat mission.