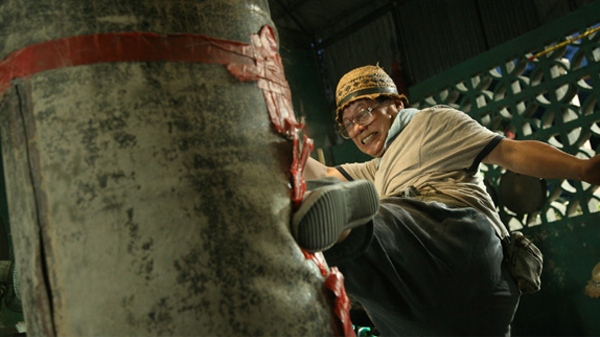 A scene from comedic martial arts film 'Gallants,' which will kick off the 2010 Reel Asian Film Festival in Toronto. (Focus Films)

Family dysfunction, identity issues and an undying love for kung fu are just a few of the themes driving the 2010 Toronto Reel Asian International Film Festival (Nov. 9 to 15).

"This festival has always been devoted to breaking down barriers and we've come a long way," Keung told CTV.ca.

"Just look at the way Canadian and Asian filmmakers are joining forces on international co-productions, now more than ever."

Reel Asian opens with "Gallants," a hilarious homage to the kung-fu movies of the 1970s from directors Clement Sze-Kit Cheng and Hong Kong's Derek Chi-kin Kwok.

In between cinephiles will find many strong entries that celebrate Asia's new place in today's movie industry.

Set in 1949 Hong Kong, this rousing film follows wushu and wing chun master Ip Man as he struggles to start a new school and combat the corrupt British authorities who stand in his way.

"IP Man 2" is based on the true-life story of Bruce Lee's mentor.

The story centres on two boys who live on opposite sides of the Dooman River, which divides China from North Korea. Despite the dangers they face, these children build an unforgettable bond.

The Japanese-Canadian comedy "Toilet" earns big laughs as a nerdy engineer, a pianist and an air guitarist struggle to relate to their estranged grandmother after their mom dies.

The film was shot in Toronto and features a Canadian cast.

"When I first read this script I saw a very simple yet very complex portrait of a family trying to grieve," said "Toilet" producer Sean Buckley.

Director Naoko Ogigami layers plenty of humour and emotion onto this English-speaking production.

"That is why it plays well to any audience, regardless of ethnicity," says Buckley.

"This idea definitely sparked a lot of debate among us," said Lesley Loksi Chan.

"Chinatown is not just a place where you can buy cheap stuff. These immigrant ghettos have history. That is what we wanted people to see," she said.

That message is expressed in very unique ways. But that is Reel Asian's strength, said Keung.

"Every Asian filmmaker has his own voice and his own view of humanity," she said. "The Reel Asian festival opens up that dialogue to the rest of the world."