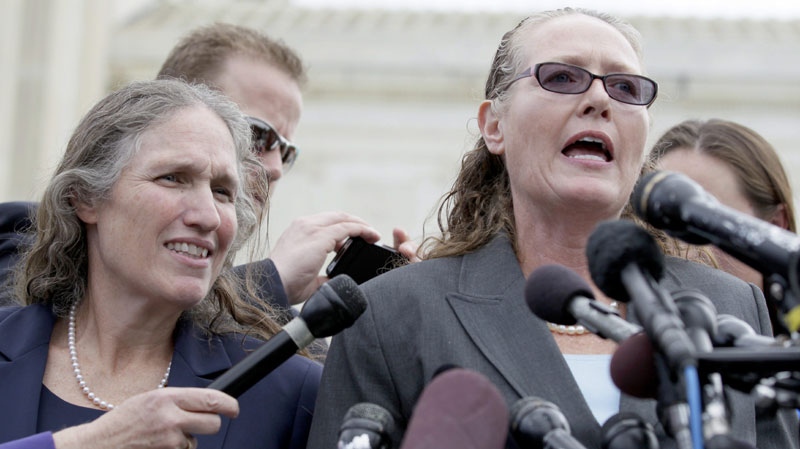 TORONTO - Members of a radical Kansas church have cancelled plans to picket the funeral of a nine-year-old girl killed in a shooting rampage in Arizona, after being promised a live interview on a Toronto radio station.

Dean Blundell, a controversial morning show host on rock radio station 102.1 The Edge, said he brokered the deal with Shirley Phelps-Roper of the Westboro Baptist Church in an effort to prevent further suffering for the victim's family.

Phelps-Roper has also credited Blundell and another Arizona radio station for persuading her and fellow church members to stay away from the funeral for Christina Green, who was one of six people killed on Saturday in Tucson, Ariz.

The church had previously planned to picket Green's funeral on Thursday, saying the Arizona shooter had been sent by God to punish sinners in the country.

The organization also has a long history of picketing the funerals of fallen American soldiers on the grounds that the nation is too tolerant towards homosexuals.

Word of the church's plans prompted Arizona legislators to rush through a law prohibiting protests within 100 metres of a funeral or burial service.

Phelps-Roper has been a semi-regular guest on Blundell's program in the past, where her hardline right-wing views were played for laughs for the show's largely left-leaning audience.

Blundell said he was able to draw upon his existing relationship with her to persuade her to leave Green's family and friends to mourn in peace.

"I said, 'I'll let you say whatever you want to say. You can spew whatever religious rhetoric you like, you can talk about how terrific it is on our morning show ... if you agree not to protest the funeral,' and she agreed," Blundell said in a telephone interview.

Phelps-Roper, a church member and the daughter of its pastor, took to Toronto's airwaves on Tuesday, where Blundell honoured his pledge by giving her a few minutes of uninterrupted air time.

Phelps Roper said Westboro still plans to picket the funerals of other victims, but Blundell hopes to change her mind by allowing her to give a repeat performance on Thursday's program. During the broadcast, scheduled for 9 a.m., Blundell said he plans to ask her to boycott the Friday funeral of slain judge John Roll and other victims of the Arizona shooting.

Blundell acknowledged Phelps-Roper's appearances are not always popular with listeners, but said her on-air tirades will spare mourners from additional pain.

"I'd give up days of our show if I could prevent her from hurting anybody else," he said.

Phelps-Roper's controversial interviews are just one provocative facet of Blundell's show, which drew the ire of the Canadian Broadcast Standards Council last October.

The council ruled Blundell made comments about Justin Bieber fans that "inappropriately sexualized children" and ordered the radio station to make an on-air apology.

Blundell concedes Phelps-Roper's appearances are usually billed as entertainment, saying her views are so outrageous that listeners can't help but laugh.

"It's like someone calling in and saying the colour blue is really the colour red," he said. "And the funny part is she really believes it."

This week's interviews are no laughing matter, he said, adding his efforts to get her more air time were prompted by his conscience.

"I think we have a bigger responsibility, not just to Canadians, but we've got a responsibility to the rest of the world as broadcasters to be able to try and make a difference somehow," he said.

"That little girl didn't have a chance. If we can offer up some radio time and let her talk silliness, we're more than happy to do it if she promises not to hurt anybody."