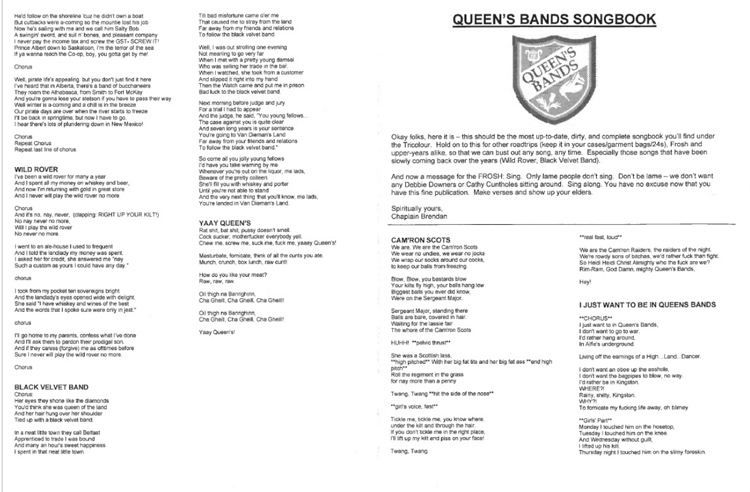 Copy of the Queen's Bands Songbook.

A Queen's University marching band will not perform again this year after administrators learned of highly offensive songbooks and pamphlets the group issued to members.

School officials were appalled to see the contents of the Queen's Bands materials that contained offensive language that was deemed "particularly demeaning" to women.

"The materials, and the behaviours they promote, are unacceptable," Ann Tierney, the school's dean of student affairs, said in a statement issued Thursday.

"They point to a sub-culture within the Bands where explicit, disrespectful and degrading language marginalizes community members who may remain silent for fear of exclusion."

The school announced Thursday that band was immediately suspended from participating in any of its scheduled performances this fall.

Band members will also be required to attend "human rights training," in addition to the ongoing suspension. And they will have to develop a plan to "review, revise and rectify Bands policies and procedures."

The university and the undergraduate student government will "review the Bands' progress in the new year."

Following the suspension, the Queen's Journal campus paper posted a copy of the "Queen's Bands Songbook" to its website.

Many of the songs included in the book contained vulgar language and crude references to sexual acts and women.

The marching band issued a brief statement after the suspension was handed down.

"The Queen's Bands have taken responsibility for their prior actions. We regretfully inform you that our performances have been temporarily cancelled. Through this adversity, we expect to emerge as a stronger organization."

The campus paper also reported that the marching band was aware of the controversial nature of the material it was circulating and previously warned new members not to misplace it.

On Thursday, the marching band ordered members to immediately destroy all copies of the songbook in their possession, the Journal said.