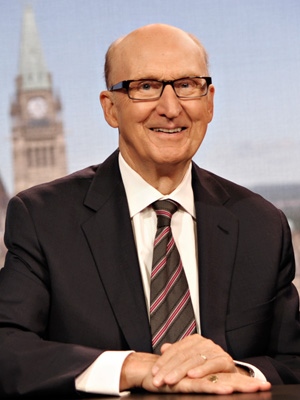 For more than five decades, Craig Oliver’s distinguished career has seen him travel across the country and around the world to deliver reports and analysis on the intricacies of Canadian, U.S., and international politics. The veteran journalist continues to weigh in on today’s most significant political issues as Chief Political Commentator for CTV NATIONAL NEWS, based in Ottawa.

Until 2012, Oliver’s unique style of questioning was put to Canadian newsmakers and members of government every Sunday on Canada’s landmark political program – CTV’s QUESTION PERIOD.

The depth of Oliver’s experience is evident in the decoration of awards he has received from both his country and his peers. In 2012, Oliver was named an Officer of the Order of Canada. Ottawa newspaper The Hill Times named Oliver as one of the Top 100 most Influential People in Government and Politics in 2010. In 2009, Oliver was the recipient of the Hy Solomon Award for Excellence in Public Policy Journalism from the Public Policy Forum (PPF). In 2000, his lifetime of work – so far – was recognized with the National Press Gallery’s Charles Lynch Award.

Oliver has known and covered 11 Canadian Prime Ministers in office, and been involved in every Canadian federal election campaign since 1957 (when he chased John Diefenbaker down the streets of Prince Rupert, B.C.). During his tenure as CTV Washington Bureau Chief, Oliver reported on the Ronald Reagan years and covered U.S. election campaigns.

From his first days in the radio booth at CBC Radio in Prince Rupert at the tender age of 18, to the corridors of Parliament Hill, Oliver has covered it all. He got his start in broadcasting at CBC Radio in 1957, cutting his teeth covering news from the Prairies. He moved up the ranks and across the country to Regina, then Winnipeg, finally landing in Toronto as the Executive Producer of Regional News for CBC.

Oliver took his first assignment with CTV in 1972, and served as the network’s Ottawa Bureau Chief for a total of nearly 20 years. He was CTV News’ correspondent in Washington, D.C. from 1979-88, held the post of Director of News and Current Affairs from 1973-76, and produced CANADA AM’s inaugural live broadcasts in 1973.

The Radio and Television News Directors Association (RTNDA) presented Oliver with its 1995 Presidents' Award for Excellence in Canadian broadcast journalism. The same year, the Canadian Association of Broadcasters inducted him into the Canadian Broadcast Hall of Fame. In 1994, he earned two Gemini Awards – Best Reportage and the Gordon Sinclair Award for Best Overall Broadcast Journalism.

He is an avid equestrian – both western and English. For more than 20 years, Oliver has spent time in the summer riding in the Rockies outside Bragg Creek, Alta. and until recently, enjoyed riding his English mare, “Katie”, at home in Ottawa. He’s also run two marathons and paddled his way up to the high Arctic with a canoe group that included the late Prime Minister Pierre Trudeau.

Oliver is legally blind and celebrated his 70th birthday by hosting a fundraiser for the University of Ottawa, which raised more than $100,000 for the Ottawa Eye Institute. He also volunteers his expertise to the CNIB. He speaks English.

• 2010 - The Hill Times, Top 100 Most Influential People in Government and Politics

Listen and subscribe to the CTV Question Period Podcast to get your weekly fix of political news.