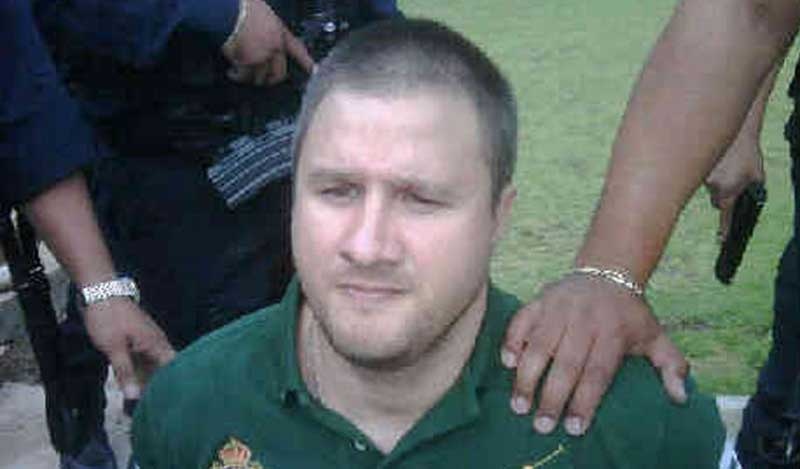 MEXICO CITY - A former Texas high school football player and petty street dealer who allegedly rose to become one of Mexico's most savage assassins became the third major drug lord brought down by Mexico in less than a year, and could provide intelligence on even bigger kingpins.

Edgar Valdez Villarreal, known as "the Barbie" for his fair complexion and green eyes, grinned broadly Tuesday as police described a life of luxury and violence that made a battleground of central Mexico, where he waged a war for control against his slain boss's brother.

The 37-year-old Valdez faces charges in three U.S. states for trucking in tons of cocaine. As a U.S. citizen living illegally in Mexico, Valdez could be deported to the United States if Mexico agrees, or he could face prosecution in Mexico for drug-related crimes. Mexican authorities say he could be responsible for dozens of murders.

The arrest was portrayed by Mexico's government as a victory for President Felipe Calderon as he tries to recover public support for his war on organized crime in the face of escalating violence.

U.S. and Mexican officials described Valdez's arrest on Monday as the culmination of a yearlong pursuit and stronger intelligence sharing between the two countries.

Mexican police said they chased Valdez across five Mexican states for a year, a pursuit that intensified in recent months as they raided home after home owned by the drug lord, missing him but nabbing several of his allies. Among those taken into custody was his girlfriend and her mother, Valdez's U.S. lawyer said.

"This has been going on for quite a while," attorney Kent Schaffer told The Associated Press. "So you figure it's just a matter of time."

Born in the border city of Laredo, Texas, Valdez grew up in a middle-class subdivision popular with Border Patrol agents, police officers and firefighters. His father was a nightclub and bar owner.

The former Laredo United High School linebacker became a small-time street dealer as a teen, before rising to become the head of a group of assassins for Mexico's notorious Beltran Leyva gang, allied with the powerful Sinaloa cartel, according to U.S. and Mexican officials.

U.S. prosecutors say Valdez has been the source of tons of cocaine smuggled into the United States while cartel dealers shipped millions of dollars in cash back to Mexico in tractor-trailer trucks.

Valdez's first arrest came at 19 in Texas, where he was charged with criminally negligent homicide for allegedly running over a middle school counsellor in his truck while speeding down a Laredo street. He was never indicted.

Minor scrapes with the law followed: drunken driving, speeding, public intoxication. All the while, Valdez worked as a small-time street dealer -- a small fish to state narcotics officers, according to Martin Cuellar, now the Webb County sheriff, who was an undercover narcotics officer at the time.

After leaving Texas for Mexico, police say Valdez quickly rose through the ranks of the Beltran Leyva cartel. He was anointed head of Acapulco operations by cartel leader Arturo Beltran Leyva after serving as the drug kingpin's top bodyguard, according to Federal Police Commissioner Facundo Rosas.

Living illegally in Mexico, Valdez built up a life of luxury, with homes in the most expensive neighbourhoods of Mexico City and a bar called Xxxotica in the steamy Pacific resort of Acapulco, Rosas said.

The biggest coup came in December, when Mexican marines killed cartel lord Arturo Beltran Leyva during a gunbattle in Cuernavaca.

That unleashed a gruesome fight between Valdez and Beltran Leyva's brother, Hector, the only one of the cartel's founders who was still at large. Decapitated and dismembered bodies littered the streets of Cuernavaca and Acapulco -- and often hung from bridges -- along with messages threatening one of the two feuding factions.

Such bloody turf wars have repeatedly exploded following the downfall of top traffickers during Calderon's drug war, angering Mexicans who say life has become intolerable in parts of the country. Calderon's government says the violence is a sign cartel leaders are desperate and making mistakes that lead to their capture.

Running from security forces and his former allies, Valdez was forced to give up his high-flying lifestyle in Acapulco for a lower-profile existence among the wealthy in sprawling Mexico City, Rosas said.

Informants stepped forward. The fiery-tempered Valdez berated one accomplice for shooting Paraguayan soccer player Salvador Cabanas during an argument at a Mexico City bar in January, an attack that led to the arrest of a minor henchman, who later told police about Valdez's fury over the incident.

More of his allies fell in a series of raids and shootouts in Mexico City, Acapulco and other towns. Fifteen Valdez henchmen were killed in a battle with soldiers last month in Taxco, a mountain hamlet outside of Mexico City where authorities had recently discovered the bodies of 55 cartel victims dumped in a mine shaft.

The pursuit intensified six weeks ago when Mexican security officials began getting tips on Valdez's whereabouts and approached U.S. agents for help, according to U.S. law enforcement officials in Washington, who spoke on condition of anonymity because of the sensitivity surrounding the arrest. U.S. intelligence helped pinpoint his location Monday.

The U.S. and Mexican governments had offered rewards totalling $4 million for information leading to Valdez's capture. However, Rosas said security forces nabbed Valdez on their own and there would be no reward.

"Because they caught La Barbie alive, he will be a very important source of information against El Chapo," said Raul Benitez, a professor at the National Autonomous University of Mexico who studies the drug trade. "La Barbie was once the bodyguard of El Chapo Guzman."

Rosas said Valdez has already started talking: He informed police that on the night Beltran Leyva died, the drug boss called him as marines were closing in. Valdez said he had urged the capo to turn himself in, advice Beltran Leyva apparently ignored, Rosas said.

After that, Rosas said, the Beltran Leyva gang started suspecting that Valdez had tipped authorities to Beltran Leyva's whereabouts. Rosas did not say whether those suspicions were true.

Rosas said he expected the turf war in central Mexico to rage on for a while as Valdez's allies struggle to hang on. But he said he was hopeful that this time the downfall of a drug lord would eventually curb the bloodshed.

"In the end, the balance will be positive. The violence will diminish," he said.