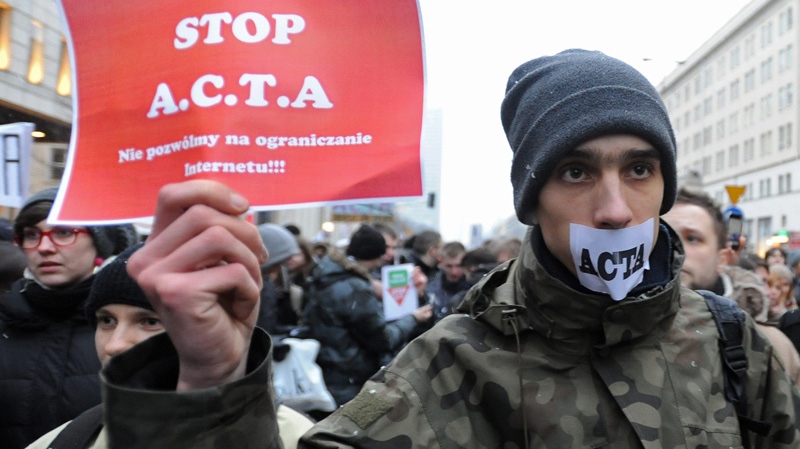 Canadians are protesting proposed copyright laws online and offline Friday they say infringe on basic free-speech rights, threaten to "lock-down" the Internet and play into the hands of the entertainment industry.

The Copyright Modernization Act (Bill C-11) is vehemently opposed by thousands of people who argue the government hasn't listened to their concerns.

The proposed law does allow copying from a CD to an iPod or creating a mash-up video on YouTube, but critics suggest a "super-clause" that makes it illegal to break digital locks on electronic content or devices will override parts of the bill that protect consumer rights.

That means you can copy a CD to your computer, but it may be illegal if the record label that produced it says so, critics say.

Geist, University of Ottawa research chair on Internet and e-commerce law, said there are similar provisions in C-11 that were contained in the now-defunct Stop Online Piracy Act (SOPA) that U.S. President Barack Obama shot down last month.

Similar to SOPA, the Canadian bill could cause websites like YouTube to be "offside of the law," he said.

The Internet advocacy group OpenMedia.ca argues C-11 will result in an Internet "lock-down" that will cut users off from content "for no good reason."

They have created a form opponents can fill out online that will be sent to the federal government and the prime minister.

"Canadians are fed up with our digital deficit, and with big media lobbyists pushing back against our interests," said OpenMedia executive director Steve Anderson in a release Friday.

"Canadians want an open and affordable Internet, not new restrictions. The majority of Canadians are against these provisions and it's time for our voices to be heard," he said.

Debate on the law ends Friday in the House of Commons and will then be sent to committee for review.

Protests are being scheduled to be held in Canadian cities to support that grassroots movement as well as opposing C-11. Events will take place in Montreal, Edmonton, Regina and Moncton.

What really irks opponents of C-11 is the fact thousands of people provided input to the government in 2009 – more than 6,000 followed up in writing – stating the "super-clause" was bad policy.

Opponents at the time included teachers, libraries, privacy commissioners and artists, who suggested a compromise that the digital lock clause be amended so that it only applies to "willful copyright infringement."

In other words, it would target pirates who profit by stealing the work of the entertainment industry by breaking digital locks, not everyday people transferring data for their own use.

The government didn't heed that advice and pushed forward with the controversial clause in place, something opposite to what's happening in other countries like the United States.

Public outcry in the U.S. managed to kill SOPA, a law that targeted content piracy with the potential to block websites.

Critics said that could change the architecture of the Internet and lead to further censorship.