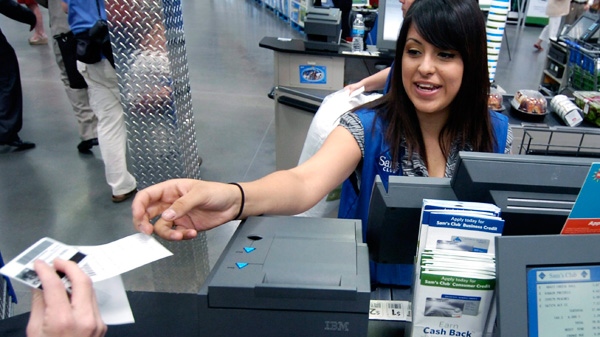 Consumers may soon have the choice of forgoing a printed receipt at the check-out counter, as an increasing number of retailers cut ties with the tiny slips of paper that have been issued to customers for decades. (AP / April L. Brown)

Consumers may soon have the choice of forgoing a printed receipt at the check-out counter, as an increasing number of retailers cut ties with the tiny slips of paper that have been issued to customers for decades.

The paperless receipt is gradually creeping into the Canadian marketplace, as a variety of retailers implement new types of systems that allow customers to retrieve their receipts from email or online websites.

She's also been offered the same type of paper-free transaction at an Apple store, as well as at a cosmetics boutique located in Toronto's Annex neighbourhood.

Lewkowicz thinks the paperless receipt is a handy innovation that serves a dual purpose.

"I think it's a good thing, it's saving trees, but it's convenient," said Lewkowicz, who works as a graphic designer.

Retired IBM system programmer Denis Marquis agreed to have a receipt delivered to his inbox when making a recent purchase at an eyeglasses retailer in Victoriaville, Que.

It was an option that Marquis welcomes since he won't have to store a piece of paper in a box as he would have in the past.

"Hope more will do the same," Marquis told CTVNews.ca by email.

These are the kind of consumer responses that have prompted a handful of big retailers to introduce the paperless receipt to Canadian customers.

The Gap, its outlet stores and associated brands Banana Republic and Old Navy are some of the well-known companies, along with Apple, that currently offer a paperless option in Canada.

Gap Inc. spokesperson Tara Wickwire said customers are largely embracing electronic receipts, which have been available in Gap-owned stores for the past two months. Customers can choose whether they want a traditional printed receipt, one that is emailed to them, or both.

"Not only do our customers appreciate this environmentally friendly option, but they also like receiving their electronic receipt because it allows them to sort and manage receipts easily in a folder via their email accounts," Wickwire told CTVNews.ca in an email.

"Another added perk is that customers can return their merchandise without a paper receipt by taking advantage of our receipt look up service for credit card and debit card purchases."

But there are also lucrative marketing opportunities that come with a paperless system, which consumers may want to consider before opting in.

Because shoppers must provide an email to receive a receipt, retailers can learn a lot about a customer's preferences and buying habits, said Jason Shapiro, who leads an Atlanta-based company that helps retailers go paperless.

"In the past, when you would go into a store and you would by an item, that's pretty much it. They don't know who bought it or anything like that," Shapiro, the CEO of TransactionTree, told CTVNews.ca in a telephone interview.

Now companies will be able to cross-reference customers and their purchases and market their products accordingly.

Under Canadian privacy laws, retailers using paperless receipt systems would have to let customers know about the way their emails will be used, said Anne-Marie Hayden, the director of communications for the Office of the Privacy Commissioner. They will also have to protect the data they collect.

Even with these laws in place, Hayden said the onus will still be on consumers to make sure they understand what they are consenting to when signing up for a paperless receipt.

"Consumers, of course, also have a role to play. They should be aware of the implications of choosing an e-receipt over a paper one, and be prepared to ask questions of the merchant," Hayden told CTVNews.ca by email.

"Those who prefer to pay cash in order to leave no data trail linked to them as identifiable individuals should know that an e-receipt creates a record that could be tied back to them."

Shapiro said consumers simply have to decide if they want to give up the convenience that comes with an electronic receipt to shield themselves from unwanted marketing overtures.

"You've got to weigh the risks versus reward here," he said.

In some ways, the concept of a paperless receipt isn't very groundbreaking. Canadians have been using online banking for years and bills are routinely sent electronically.

Ditching printed slips of paper seems like a logical step that could already have been taken.

"It slowed down during the overall economic slowdown, but since then it's picked back up. We've been pretty swamped," he said.

TransactionTree counts Ontario's D.O.T. Furniture chain among its clients, though Shapiro says his company is working to help a second and unnamed Canadian company go paperless in future.

Other big retailers testing out paperless systems in the United States are not yet doing the same in Canada.

Sears outlets in Canada for instance, do not have such a system in place, according to an email from spokesperson Vincent Power. But the New York Times has reported that some U.S. Sears locations do.

The same goes for Whole Foods, which has a half-dozen locations in Canada and scores of stores south of the border.

Whole Foods spokesperson Kate Klotz told CTVNews.ca that the grocery chain is testing out paperless receipts in its Atlantic region, which does not include any of its stores in Ontario or British Columbia.