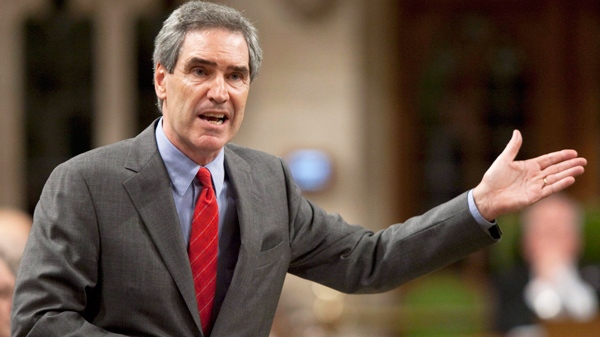 Liberal Leader Michael Ignatieff questions the government during Question Period in the House of Commons on Parliament Hill in Ottawa, Wednesday May 26, 2010. (Adrian Wyld / THE CANADIAN PRESS)

The president of the Young Liberals has called on Canadian progressive parties to unite to defeat Prime Minister Stephen Harper.

Samuel Lavoie told The Globe and Mail that he supports a merger of left-wing federal parties, meaning the Liberals and the NDP, but not the Bloc Quebecois.

"What scenarios are left to impede Harper from radically altering the face of our country in a way a majority of Canadians don't agree with?" he told the paper.

Lavoie said he hoped to spark discussion on the issue for a number of informal party events over the summer.

However, the Conservatives were quick to once again bring up the unpopular, and ultimately failed, 2008-era coalition of Stephane Dion's Liberals, the NDP and the Bloc.

"We can't afford NDP co-management of the economy. And we most certainly cannot afford a policy veto for the Bloc Quebecois -- the glue that made the last Coalition attempt possible," said a Tory memo issued to supporters.

Penny Collenette, a former advisor to prime minister Jean Chrétien, told CTV News Channel's Power Play that talking about a coalition or formal merger before an election is not a realistic possibility.

However, she cited the recent coalition government in the U.K. as an example of voters pushing for parties to work together.

"After an election, what (do) the voters say? They are the boss," she said.

Geoff Norquay, a former communications director for Harper, said that any coalition talk only can hurt Ignatieff.

"Every time a Liberal takes this idea seriously and advances the cause, its more bad news for Mr. Ignatieff," he told Power Play.

"What they are essentially saying to each other, and Canadians, is that he can't come back from where he is now and led (the Liberals) back to government."