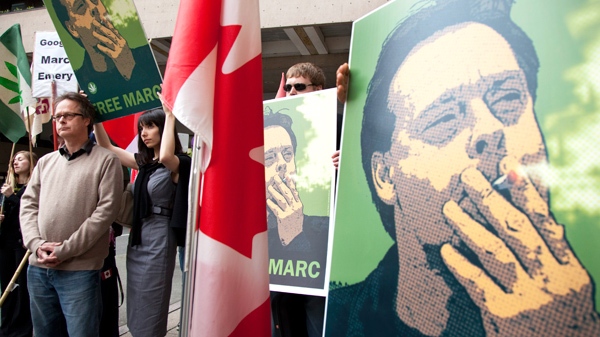 Marc Emery, the self-described "Prince of Pot" speaks to reporters outside the B.C. Supreme Court in Vancouver before turning himself in to be extradited to the United States as his wife Jodie stands behind him, Monday, May 10, 2010. (Jonathan Hayward / THE CANADIAN PRESS)

Canadian pot activist Marc Emery has been sentenced to five years in a U.S. federal prison for selling marijuana seeds south of the border.

The 52-year-old Vancouver resident learned his fate on Friday afternoon in a U.S. district court in Seattle. His lawyer brought about the five-year prison term on the charge of conspiracy to manufacture marijuana.

Emery's sentence also includes four years of "supervised release" to follow his prison term, according to a statement from the U.S. Attorney's Office that described Emery as the largest marijuana seeds vendor in the U.S. when he was indicted in 2005.

"There is no question your actions were illegal and criminal and your actions ensured that others broke the law and suffered the consequences," U.S. District Judge Ricardo S. Martinez told Emery in his sentencing decision.

Emery signed a plea agreement stating that he and two associates, Michelle Rainey and Gregory Keith Williams, who helped run a business distributing marijuana seeds. Rainey, 39, and Williams, 54, both worked for Emery Seeds. They were each sentenced to two years of probation on conspiracy to manufacture marijuana charges last year in a Seattle court.

In a statement from Emery quoted by The Globe and Mail, he said it was "arrogant" to defy U.S. law.

"My zealous pursuit of what may be an honourable goal of repeal of a bad law blinded me from recognizing that my example of flouting the law is a bad example to set for others," Emery's statement reads.

The U.S. Attorney's office said that three-quarters of the seeds that Emery's company sold between 1995 and 2005 wound up in the United States. It also charged those seeds were linked to illegal marijuana-growing operations "protected by guns and booby traps."

"Marc Emery decided that U.S. laws did not apply to him, but he was wrong," U.S. attorney Jenny A. Durkan said in a statement. "He sold to anyone who would pay him -- with no regard for the age or criminal activities of his customers."

Justice Minister Rob Nicholson ordered that Emery be extradited to the U.S. in May, after a five-year legal battle over Emery's business.

In a blog posting dated Sept. 8, the self-described "Prince of Pot" wrote that he hopes to be transferred to a Canadian prison.

If successful, he said he could be eligible for parole in November 2011.