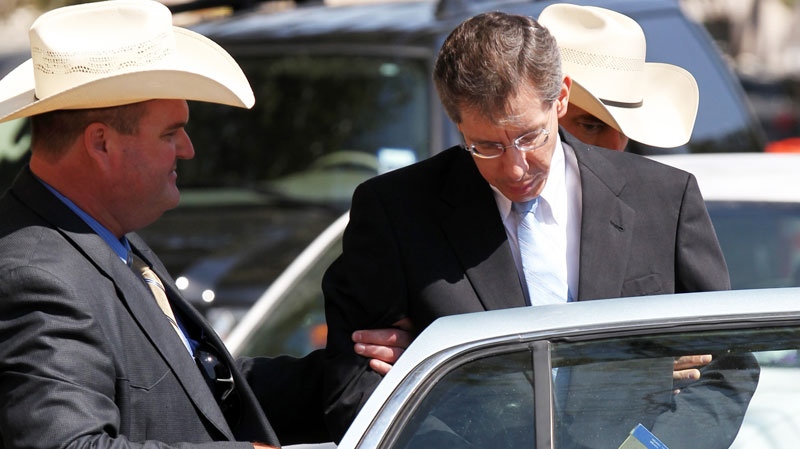 Warren Jeffs, leader of the Fundamentalist Church of Jesus Christ of Latter Day Saints, right, is placed into the back of a waiting car in San Angelo, Texas Tuesday, Aug. 9, 2011. (AP / The San Angelo Standard-Times, Patrick Dove)

SAN ANGELO, Texas - Polygamist leader Warren Jeffs was sentenced to life in prison on Tuesday for sexually assaulting an underage follower he took as a bride in what his church deemed a "spiritual marriage."

The head of the Fundamentalist Church of Jesus Christ of Latter Day Saints also received a 20-year sentence for the sexual assault of a 15-year-old girl.

He stood quietly Tuesday as the decision of the Texas jury was read, giving him the maximum sentence on both counts. They are to be served consecutively. Texas Department of Criminal Justice spokesman Jason Clark said the 55-year-old will be eligible for parole in 35 years.

Prosecutors had asked the jury for the life sentence after presenting their painstaking and sometimes graphic case, and rejected Jeffs' contention that he was being persecuted for his religious beliefs.

"The evidence in this case shows that this isn't a prosecution of a people," prosecutor Eric Nichols said in his closing argument. "This is a prosecution to protect people."

During the trial, prosecutors used DNA evidence to show Jeffs fathered a child with the 15-year-old and played an audio recording of what they said was him sexually assaulting the 12-year-old.

Jeffs, who had insisted on acting as his own attorney during the earlier part of the trial, was convicted Thursday.

He asked to be excused under protest during the sentencing phase, which ended Tuesday with him refusing to answer when the judge asked if he wanted to make a closing statement. A defence attorney told the judge Jeffs had instructed his attorneys not to speak for him.

Jurors deliberated less than half an hour.

During the trial, prosecutors played other tapes in which Jeffs was heard instructing as many as a dozen of his young wives on how to please him sexually -- and thus, he told them, please God.

"If the world knew what I was doing, they would hang me from the highest tree," Jeffs wrote in 2005, according to one of thousands of pages of notes seized along with the audio recordings from his Texas ranch.

Nichols referred to that in his closing.

"No, Mr. Jeffs, unlike what you wrote in your priesthood records ... we don't hang convicts anymore from the highest tree. Not even child molesters," Nichols said.

Jeffs claimed his religious rights were being violated. Representing himself after burning through seven high-powered attorneys, he routinely interrupted the proceedings and chose to stand silently in front of jurors for nearly half an hour during his closing arguments. He called just one defence witness, a church elder who read from Mormon scripture.

The Fundamentalist Church of Jesus Christ of Latter Day Saints, a radical offshoot of mainstream Mormonism that believes polygamy brings exaltation in heaven, has more than 10,000 followers who consider Jeffs to be God's spokesman on Earth.

He spent years evading arrest -- crisscrossing the country as a fugitive who eventually made the FBI's Ten Most Wanted list before his capture in 2006, said Nichols.

Several former members of the church testified that Jeffs ruled the group with a heavy and abusive hand. Jeffs also allegedly excommunicated 60 church members he saw as a threat to his leadership, breaking up 300 families while stripping them of property and "reassigning" wives and children.

In an audiotape played during the sentencing phase, Jeffs was heard softly telling five young girls to "set aside all your inhibitions" as he gave them instructions on how to please him sexually. Jeffs is heard telling the girls that what "the five of you are about to do is important."

Prosecutors suggested that the polygamist leader told the girls they needed to have sex with him -- in what Jeffs called "heavenly" or "celestial" sessions -- in order to atone for sins in his community. Several times in his journals, Jeffs wrote of God telling him to take more and more young girls as brides "who can be worked with and easily taught."

FBI agent John Broadway testified that fathers who gave their young daughters to Jeffs were rewarded with young brides of their own. Girls who proved reluctant to have sex with Jeffs were sent away, according to excerpts from Jeffs' journals that prosecutors showed to the jury.

Police raided the group's remote West Texas ranch in April 2008, finding women dressed in frontier-style dresses and hairdos from the 19th century as well as seeing underage girls who were clearly pregnant. The call to an abuse hotline that spurred the raid turned out to be a hoax, and more than 400 children who had been placed in protective custody were eventually returned to their families.

Jeffs is the eighth FLDS man convicted since the raid on Yearning For Zion, in the town of Eldorado, 45 miles south of San Angelo. Previous sentences ranged from six to 75 years in prison.

The church's traditional headquarters is along the Utah-Arizona border, but it established the Texas compound in 2004. Jeffs once faced criminal charges in Arizona and was convicted of accessory to rape in Utah in 2007. But that was overturned by the state Supreme Court and he was extradited to Texas in December.

Willie Jessop, a former FLDS spokesman, who railed against the raid but has since disavowed Jeffs, said the first priority of the church would be tearing down the guard tower and the gate at the ranch.