OTTAWA – Former ministers Jody Wilson-Raybould and Jane Philpott will be running for re-election in the fall federal campaign as independent candidates, though have both cited an intent to align themselves with the Green Party on some issues.

The two former Liberals and close political allies donned white and unveiled their next political moves in consecutive announcements in their respective ridings on Monday. Meanwhile in Ottawa, Green Leader Elizabeth May said while she she’ll push for their re-election, she is “at a loss” as to why the two wouldn’t join her team after a serious courting.

Wilson-Raybould, who was Canada’s first-ever federal Indigenous justice minister and attorney general, said being an MP has been one of the greatest honours of her life and she wants to be elected again to return to the House of Commons, without any party affiliation.

“Today is a good day,” she said during the much-anticipated announcement in her Vancouver-Granville, B.C. riding. “I know who I am, and I am not a party person.”

Philpott, who held a trio of cabinet positions over the course of the last four years, said her decision to run again comes in part out of a desire to show young women that you shouldn’t be afraid to stand up for what you believe in.

“What lesson would it be for those young girls if I were to walk away… with my tail between my legs… I need to persevere,” Philpott said in her Markham-Stouffville Ont. riding announcement. “We’re going to do it together.”

Running as independents will prove to be tougher campaigns to wage and win, given the additional supports available to recognized parties in the Canadian electoral system. While they will likely continue to help each other, the political realities in their ridings differ. Wilson-Raybould won her seat in 2015 with 44 per cent of the vote, while Philpott won with 49 per cent.

“There will be challenges but with your support I am confident that running as an independent is the best way to go about it at this time, and the best way to transform our political culture,” said Wilson-Raybould.

Similarly, Philpott spoke about how this decision will free her from the confines of partisan politics. She said she hopes that her and Wilson-Raybould’s campaigns will start a tradition of more independent candidates running, and winning.

“There is no longer a political party telling me what to say, there is no longer a political staffer telling me how to vote. There are no longer corporate lobbyists that are influencing the direction that I would go. The only people that are the boss of me right now are you,” she said, gesturing to the crowd at her announcement. She said that as an independent her votes will be decided by three factors: her constituents, the evidence, and her conscience.

Speaking about what brought her to this decision, Wilson-Raybould said that, in the last few months, she’s reflected on what lessons can be learned from the contentious and often dramatic SNC-Lavalin controversy, and has concluded that it’s clearer than ever that politics needs to be done differently and doesn’t need to be a “blood sport.”

“Partisanship is trumping principle, that exclusion is trumping inclusion, and the lack of diversity of voices is simply unacceptable and there is too much power in the cent,” Wilson-Raybould said. 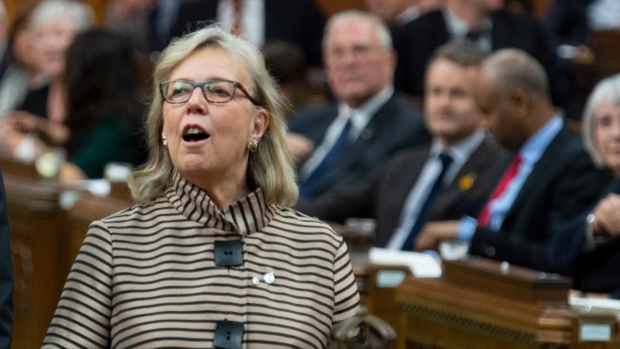 May offered to step aside for them

Both women said they see May’s Green Party as, in Wilson-Raybould’s words, a “natural and necessary” ally, so it’s possible we will see cooperation or coordination with the Greens during the coming election.

Philpott and Wilson-Raybould said that they had many conversations with May, who actively was courting them to run for her party.

“I think she is doing fantastic work, she needs to be listened to… I intend to be her ally, I intend to work with her to fight for the kinds of initiatives that will save this planet,” Philpott said.

The two soon-to-be officially independent candidates both spoke about climate change being a core and pressing issue and suggested that, on that and other issues, the time has come to move away from old ways of doing things to try and solve these pressing problems in “bold” ways.

The Green Party has gained some momentum as of late, with success in provincial elections, and winning the final federal byelection. The history-making second Green MP Paul Manley was sworn in to the House on Monday.

May, speaking with reporters on Parliament Hill Monday, offered considerable detail about the talks that happened between the three over the last few months. She said she was very close in convincing them to join her party, describing three-way phone calls, and other conversations that continued over this past weekend.

She said that she had even offered both women the chance to run for Green Party leader, indicating that May was open to stepping aside to have them run in a future leadership race.

May said she is “at a loss” to understand why the two decided to go the tougher electoral route of independence, but said she will continue to work with them.

The Green Party Leader said she will be asking the local riding associations in these ridings to run “nil” candidates against both, that would make clear their intent to push Green votes over to the two women’s campaigns.

May said personally she’d rather campaign for, than against them, but party policy is to put people up in each riding. 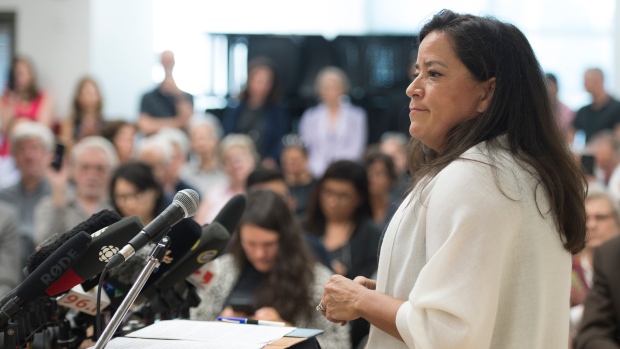 Both women have been sitting as Independent MPs since Prime Minister Justin Trudeau removed them from the party they first ran and were elected under, more than a month into the SNC-Lavalin affair.

Trudeau announced their ouster at a nationally-televised meeting of his caucus in April. The prime minister said the move was made, citing the “will of caucus,” because the trust that Liberal MPs had with the two women had been “broken.”

Wilson-Raybould resigned from cabinet in February after being shuffled out of the justice portfolio. She then presented testimony and detailed evidence related to her allegation that she faced a months-long “sustained effort" by nearly a dozen senior PMO staff and government officials pressuring her to intervene in the criminal prosecution of SNC-Lavalin, out of concern for jobs and Quebec political prospects. Philpott followed her out the cabinet room doors in March, saying that she had lost confidence in the government’s handling of the controversy.

Since being removed from the Liberal benches, both women have said they’ve been in talks with both the Green Party and NDP about potentially running under their banners. They had indicated that their time in politics may not be up, but said they would only make their decisions after consulting their constituents. 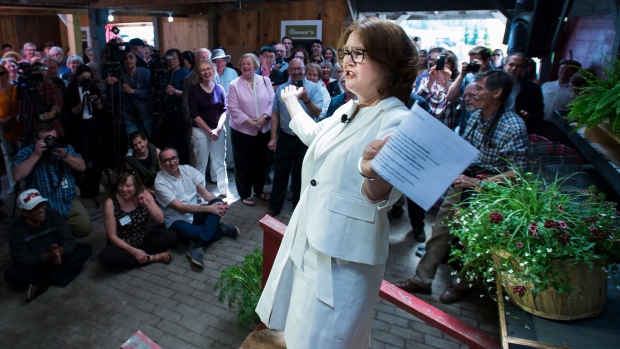 Pushing for others to join them

Ending her announcement with “fight song” Philpott’s announcement concluded with a call out for volunteers and donors. Wilson-Raybould’s included an unveiling of a campaign poster with a sun mask that she said represents new beginnings.

Both made pushes for fellow MPs or newcomers to join them in running as independents.

Philpott said anyone who has wanted to run but couldn’t align themselves with any particular party should run anyway, while Wilson-Raybould hinted that there may already be more MPs who agree that there is a better way of doing politics, and who “want to collaborate.”

In her remarks, however, Philpott was more emphatic than Wilson-Raybould in suggesting that, if re-elected, she would work with whichever government is in power, saying: “White goes with everything… It looks great with blue, and orange, and red and green, bring it all on,” Philpott said.

In the hours following their announcements, fellow former Liberal MP Celina Caesar-Chavannes told CTVNews.ca that she will now “certainly consider” running in 2019 as an independent MP. She had previously announced she would not be running again. Her decision not to run was made before she removed herself from the Liberal caucus in March to sit as an Independent, citing negative interactions with Trudeau and her no longer wanting to “distract” from the work of her colleagues.

The Liberals, Conservatives, and New Democrats have confirmed that they also will be running candidates against these two.

Liberal Party spokesperson Braeden Caley told CTVNews.ca that the party “is continuing to be approached by a variety of talented community leaders,” in both ridings.

The Conservatives have already nominated a candidate in Philpott’s riding, but the local Conservative association in Wilson-Raybould’s riding has yet to open its nomination.

NDP Leader Jagmeet Singh said both women have shown “class” and “guts” but the party intends to run New Democrats in all 338 ridings.

Neither saw their decisions to run independently as opening the door to vote-splitting among progressives that would be to Conservative Leader Andrew Scheer’s electoral advantage.

“I don’t believe that votes simply need to be divided among three or four political parties,” said Wilson-Raybould. “We need to move beyond what is traditionally thought of as the establishment, to individual voices of members of Parliament.”