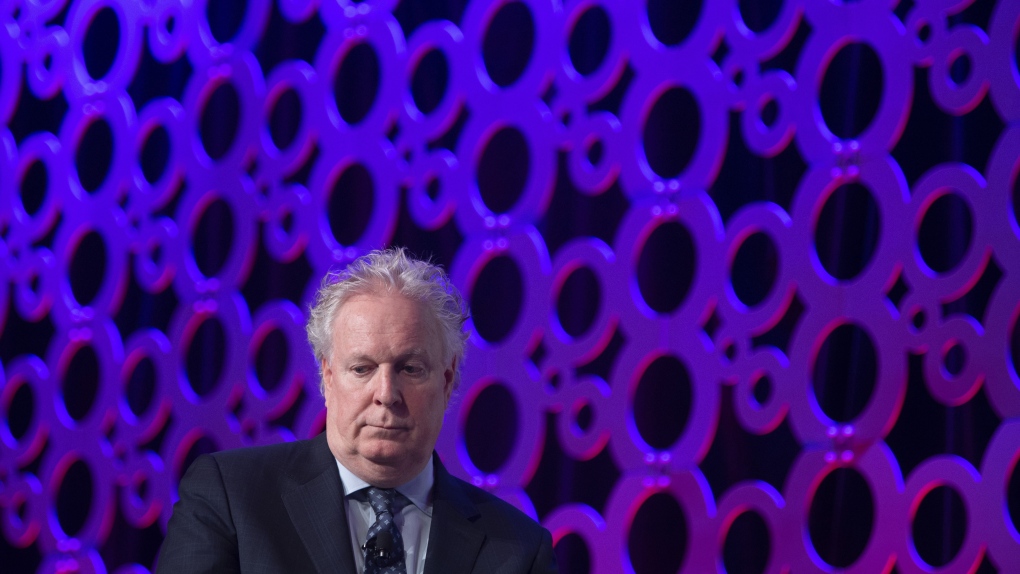 Jean Charest is seen during a panel discussion at the Canadian Aerospace Summit in Ottawa on November 13, 2019. THE CANADIAN PRESS/Adrian Wyld

MONTREAL -- While former Quebec premier Jean Charest mulls a leadership bid for the Conservative Party of Canada, recently unsealed police warrants have given his political opponents plenty of ammunition.

Charest, Quebec premier from 2003-12, and before that a federal cabinet minister and leader of the Progressive Conservatives, is seen as a well-known, experienced, bilingual and talented politician who can unite English and French Canada.

But he carries serious political baggage. He's been under investigation since 2014 by Quebec's anti-corruption unit for sitting atop the provincial Liberals while the party allegedly ran a pay-to-play scheme involving some of the biggest construction companies in Quebec.

And police warrants unsealed Thursday contain detailed affidavits from major construction industry officials who said they donated to the Liberals during Charest's tenure, and that they felt pressured by the party's top fundraiser to give money or risk losing influence with the Liberal government.

Charest has never been charged with any crime. And his lawyer, Michel Massicotte, told Radio-Canada in an interview Friday his client did not know major construction companies were illegally donating to the Liberals under Charest's leadership.

"We have always proclaimed our innocence regarding everything, to anyone who wants to hear it," said Massicotte, who declined an interview request from The Canadian Press.

While Charest proclaims his innocence, the warrants released Thursday are potentially damaging.

The warrants are connected to police searches involving Marc-Andre Bibeau, the former top fundraiser for the Liberals in the Charest era and a good friend to the former premier. Bibeau fought all the way to the Supreme Court to have the warrants kept under seal, but he lost Thursday when the country's highest court refused to hear his appeal.

The warrants were acquired through a court challenge by a consortium of Quebec media outlets -- The Gazette, La Presse and QMI -- and were viewed by The Canadian Press.

The documents date from 2016 and were prepared by police seeking search warrants against Bibeau as part of an ongoing investigation into him and Charest involving party financing between 2001 and 2012. They portray Bibeau as a man with significant influence in the party -- and with Charest.

Pierre Anctil, who was an executive with SNC-Lavalin in 2014, is among the many businesspeople cited in the affidavits. He told investigators in writing on April 21, 2014 that the company paid about $150,000 annually to the Liberals under Charest. SNC-Lavalin would ask its employees to donate about $3,000 each, and they would be repaid through company bonuses.

The alleged scheme contravened provincial elections law, which prohibited political donations from companies and at the time limited donations from individual donors to $3,000.

Anctil said that in 2005, then-president Jacques Lamarre told him if the company didn't pay up to the Liberals, "it would be the only firm in Quebec that didn't."

In July 2014, Rosaire Sauriol, a vice-president at Dessau, a company that won major provincial government contracts, told police the firm ran a similar system to donate to the Liberals in the mid-2000s, reimbursing employees for political donations. He said the money -- $100,000 a year -- was requested by either Bibeau or the Liberals' director of financing at the time.

Paul Lafleur, president of engineering firm BPR, told police in writing in September 2014, that the Liberal requests for donations increased to $50,000 a year from $5,000. The affidavit says Lafleur "had the feeling he had to give" to the Liberals and "he never wanted to take the risk of no longer donating to the party."

Another police affidavit said George Dick, former president of engineering firm RSW, told investigators Bibeau visited the company to remind them of the contracts it received from the provincial hydro utility. Dick told police Bibeau told him "other companies had already contributed to the Liberals, and those companies showed interest in obtaining contracts from Hydro-Quebec."

A written statement Thursday from Bibeau's lawyer said Bibeau "wishes to reaffirm his integrity and maintains that he will continue to assert his rights." It added that his "political engagement has always been done freely, voluntarily, out of personal conviction and in accordance with the laws."

No one cited in the affidavits alleges that Charest knew about illegal party financing. But his name surfaces several times as having developed a strong friendship with Bibeau.

Massicotte told Radio-Canada that the details of the investigation into Charest have been leaking out to the media for years. Those leaks, he said, reveal a "frustration" within the ranks of the anti-corruption police, because they have no evidence with which to charge his client.

"They decided to do a trial by media," he said. He added anti-corruption investigators have still not submitted their file on Charest and Bibeau to prosecutors. Six years of probing is enough, he said, adding it was time to drop the case and clear Charest's name.

"We want an end to this investigation."

Duff Conacher, co-founder of Democracy Watch, an advocacy group promoting ethical politics in Canada, said the strong ties between Bibeau and Charest could prove damaging to a Charest leadership bid.

The Canadian Press has confirmed Charest is seriously considering a leadership bid, but he has yet to announce anything official. Conacher, a former part-time University of Ottawa law professor who is now a doctoral student at the school, said Charest retains appeal across the country, especially among older voters who vote in higher numbers.

But among the swing voters who decide elections, Conacher explained, ethical political behaviour is a major concern, and Charest could not credibly sell a Conservative platform that promises to "clean up" politics.

"The perception amongst (voters) who know Jean Charest would be misuse of the old-style, crony, unethical, secretive type of politics," he said. "And he's from that era."

This report was first published by The Canadian Press on Jan. 18, 2020.