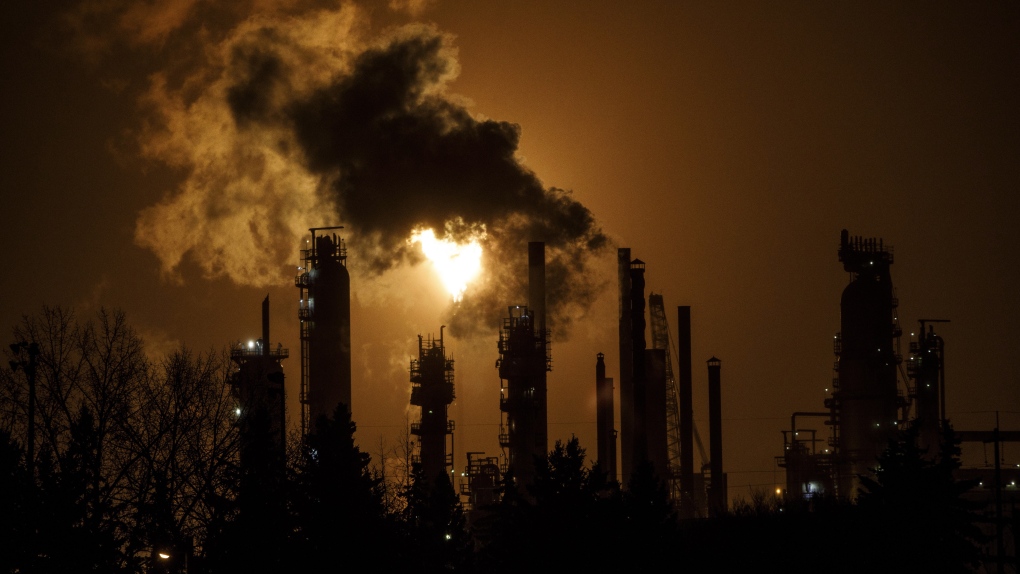 A flare stack lights the sky from the Imperial Oil refinery in Edmonton on December 28, 2018. THE CANADIAN PRESS/Jason Franson

GATINEAU, Que. -- The federal Liberals will not make a decision about hiking the carbon price beyond $50 a tonne for at least another two years, Environment Minister Jonathan Wilkinson says.

Wilkinson said his first priority in the new Parliament will be figuring out how Canada is going to meet its target for cutting greenhouse gas emissions made four years ago as part of the Paris climate change agreement.

After that, he will map a way to fulfil the Liberals' election promise to exceed that goal. He intends to have a new target ready for the United Nations climate change conference in November 2020.

Wilkinson said the forthcoming plan will lean heavily on developing clean technology to reduce the emissions from oil and gas production, and manufacturing industries.

But at the moment, Wilkinson is signalling that hiking the carbon price won't be part of the plan.

That price, which is at $20 a tonne now, is to be reviewed after it hits $50 a tonne in 2022. Wilkinson said Wednesday that he is not going to "prejudge" the outcome of that review.

"We committed to review carbon pricing as we approach 2022, we plan to do that for sure," he said. "It's part of the plan, but I would say to you carbon pricing is not the only tool in the tool box. We're going to use a whole range of them to achieve this in a way that is acceptable and works for Canada."

Last week, Canada's Ecofiscal Commission issued a report saying Canada can hit its emission targets if the carbon price quadrupled to $210 a tonne by 2030, calling it the most economically efficient way to get there. The report said regulations, such as forcing cleaner burning fuels, or subsidies, such as helping Canadians buy electric cars, cost a lot more and are often less clear to people than the carbon price.

Wilkinson said he appreciated the Ecofiscal report, but noted it comes from a purely economic efficiency perspective, and the government has to take more things into consideration.

"Our view has been that the pricing of pollution is part of a robust climate plan, but it is not a climate plan in and of itself," he said.

In 2015, the new Liberal government was just weeks old when Prime Minister Justin Trudeau went to Paris and promised that by 2030 Canada would cut emissions to 70 per cent of what they were in 2005. It was the same target set earlier that year by the former Conservative government, and in the years since has been heavily criticized by political opponents and climate experts alike for not going nearly far enough.

The government's current climate policies, including phasing out coal power, the carbon price and encouraging more energy-efficient buildings, leave Canada 79 million tonnes shy of its 2030 goal to reduce emissions to no more than 511 million tonnes.

Wilkinson isn't speculating how Canada will close that gap, nor will he suggest how much further Canada can realistically go. In 2018, a UN climate report suggested the world has to cut emissions almost in half by 2030 -- far more than any country is doing now -- to avoid catastrophe.

"I am not going to get ahead of myself and say exactly how far I think we can get," Wilkinson said.

Next week, Wilkinson is heading to Madrid for this year's UN climate conference where he said he intends to push other countries to join Canada and work on tougher targets before the 2020 meeting.

The meeting, known as the 25th Conference of the Parties, or COP25 for short, will also try to finalize rules for how some countries can get credit for helping cut emissions in another country. Wilkinson said emissions trading systems are an element of a global plan, but cautioned against it being seen as a way for Canada to just buy its way out of a problem and not do much to reduce emissions in our own backyard.

"Countries all have to recognize that the bulk of the work that you do has to be done on reducing domestic emissions," Wilkinson said. "It can't be you're simply going to use some emissions trading system. It cannot be a get-out-of-jail-free card."