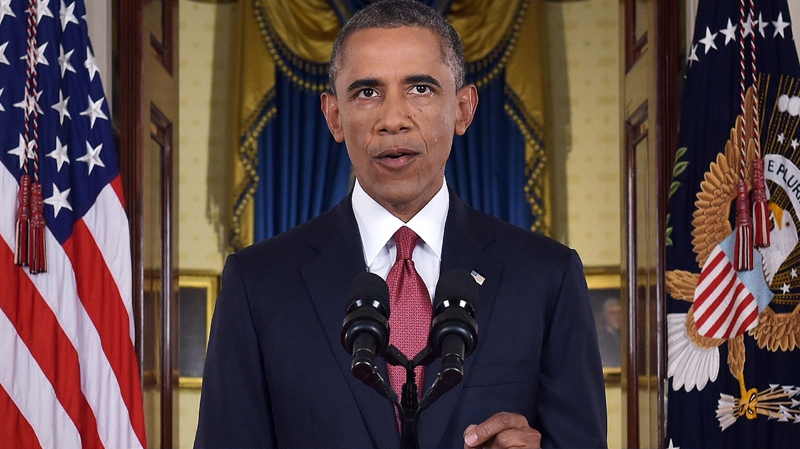 WASHINGTON -- U.S. President Barack Obama is using the legal grounding of the congressional authorizations President George W. Bush relied on more than a decade ago to go to war as he readies intensified airstrikes in Iraq and Syria. But Obama has made no effort to ask Congress to explicitly authorize his own conflict.

The White House says Bush-era congressional authorizations for the war on al-Qaeda and the Iraq invasion give Obama authority to act without new approval by Congress under the 1973 War Powers Act.

That law, passed during the Vietnam War, serves as a constitutional check on presidential power to declare war without congressional consent. It requires presidents to notify Congress within 48 hours of military action and limits the use of military forces to no more than 60 days unless Congress authorizes force or declares war.

The administration's tightly crafted legal strategy has short-circuited the congressional oversight that Obama once championed. The White House's use of post-Sept. 11 congressional force authorizations for the broadening air war has generated a chorus of criticism that the justifications are, at best, a legal stretch.

"Committing American lives to war is such a serious question, it should not be left to one person to decide, even if it's the president," said former s Rep. Paul Findley, 92, who helped write the War Powers Act.

As a U.S. senator from Illinois running for president in 2007, Obama tried to prevent Bush's administration from taking any military action against Iran unless it was explicitly authorized by Congress. A Senate resolution Obama sponsored died in committee.

Nearly seven years later, U.S. fighter jets and unmanned drones armed with missiles have flown 150 airstrikes against the Islamic State group over the past five weeks in Iraq under Obama's orders -- even though he has yet to formally ask Congress to authorize the expanding war. Obama told the nation Wednesday he would unleash U.S. strikes inside Syria for the first time, along with intensified bombing in Iraq, as part of "a steady, relentless effort" to root out Islamic State extremists. Obama has not said how long the air campaign will last.

White House spokesman Josh Earnest on Thursday cited the 2001 military authorization Congress gave Bush to attack any countries, groups or people who planned, authorized, committed or aided the Sept. 11, 2001, terrorist attacks. Earnest described the 2001 Authorization for Use of Military Force, generally known as the AUMF, as one that Obama "believes continues to apply to this terrorist organization that is operating in Iraq and Syria."

The Islamic State group, which was founded in 2004, has not been linked to the 9-11 attacks, although its founders later pledged allegiance to Osama bin Laden. In February, al-Qaida declared that the Islamic State group was no longer formally part of the terror organization. And in recent weeks, senior U.S. officials, including Homeland Security Secretary Jeh Johnson and Matthew Olsen, head of the National Counterterrorism Center, have drawn significant distinctions between al-Qaida and the Islamic State group.

Earnest said Thursday that Obama welcomes support from Congress but that it isn't necessary. "The president has the authority, the statutory authority that he needs," Earnest said.

"I actually think the 2001 AUMF argument is pretty tortured," said Rep. Jim Himes, a Democrat who serves on the House Intelligence Committee. "They are essentially saying that ISIL is associated with al-Qaida, and that's not obvious," Himes said, using an alternate acronym for the Islamic State group. "Stretching it like this has dangerous implications."

Himes supports a new congressional vote for a specific IS group authorization, as does another Democrat on the Intelligence Committee, Rep. Adam Schiff.

There is wariness even from some former Bush administration officials. Jack Goldsmith, head of the Justice Department's Office of Legal Counsel under Bush, said in the Lawfare blog that "it seems a stretch" to connect the Islamic State group to al-Qaeda, considering recent rivalry between the two groups.

The White House also finds authorization under the 2002 resolution that approved the invasion of Iraq to identify and destroy weapons of mass destruction. That resolution also cited the threat from al-Qaeda, which Congress said then was operating inside Iraq. But the U.S. later concluded there were no ties between al-Qaeda and Iraqi President Saddam Hussein or his government, and the group formally known as al-Qaeda in Iraq -- which later evolved into the Islamic State group -- didn't form until 2004, after the U.S.-led invasion.

Obama is using both authorizations as authority to act even though he publicly sought their repeal last year. In a key national security address at the National Defence University in May 2013, Obama said he wanted to scrap the 2001 order because "we may be drawn into more wars we don't need to fight." Two months later, Obama's national security adviser, Susan Rice, asked House Speaker John Boehner to consider repealing the 2002 Iraq resolution, calling the document "outdated."

Obama has asked only for congressional backing to pay for the buildup of American advisers and equipment to aid Syrian opposition forces. House Republicans spurned a vote on that separate request earlier this week, but Boehner is now siding with the administration. The White House acknowledged it could not overtly train Syrian rebels without Congress approving the cost of about $500 million.