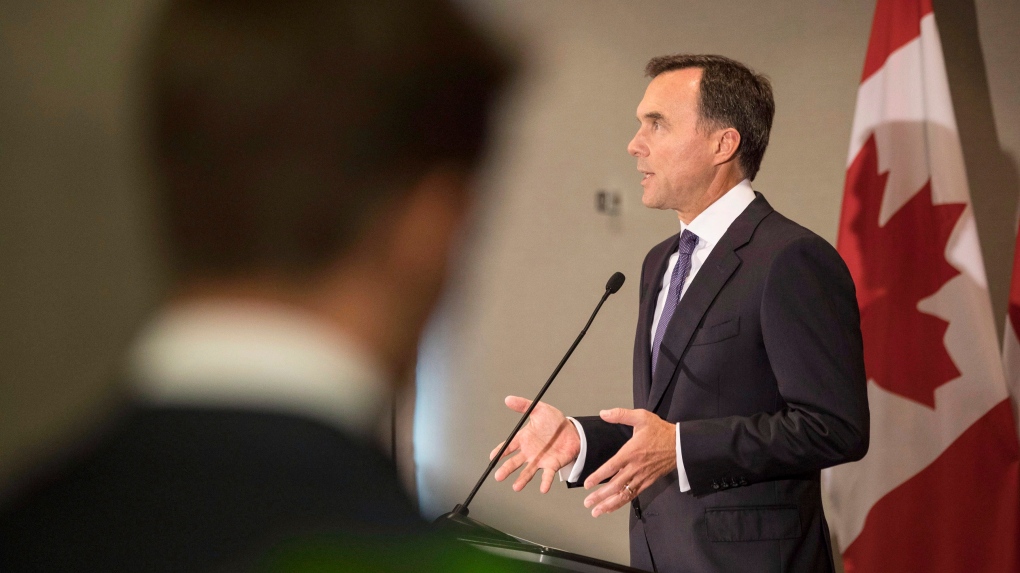 An aide looks on as Federal Finance Minister Bill Morneau addresses journalists in Toronto on Thursday August 30, 2018, as he talks about the government's Trans Mountain pipeline plan. THE CANADIAN PRESS/Chris Young

OTTAWA – First Nations, environmental advocates, and anti-pipeline activists are celebrating the Federal Court of Appeal overturning of the federal government’s approval of the Trans Mountain pipeline expansion, while the project’s proponents say they are "taking in" the 270-page ruling.

The court ruled unanimously Thursday that the National Energy Board's review of the project was flawed, and that the government failed to properly consult First Nations before approving the pipeline between Edmonton, Alta. and Burnaby, B.C.

Here’s what key stakeholders and decision makers have to say about this major hurdle for Trans Mountain and the federal government, who is on the cusp of officially being the owner of the $4.5-billion pipeline.

"While we want to make sure the project proceeds, we also want to make sure it moves ahead in the right way. Today, Kinder Morgan shareholders also voted to endorse our government's purchase of the Trans Mountain pipeline expansion and its related assets. Our next step is to close on the acquisition of the project," said Morneau.

"We chose to purchase the project because it’s a sound investment," Morneau told reporters in Toronto.

In an interview with BNN Bloomberg, Morneau said he knows there is more work to be done to figure this out.

"This is just another gut-punch to workers all across Canada, and taxpayers," said Scheer. "I don't think there’s any question as to who got the better deal this morning, it’s not the Canadian taxpayer."

Scheer said his party is outraged that the federal Liberals have ignored requests to discuss the matter more fully in Parliament, and said Conservatives would have done more meaningful consultation.

"It is inexcusable the Liberals decided to completely dismiss their concerns. I've said this before, and I’ll say it again; climate leaders don’t buy or expand pipelines. They don’t ignore the very genuine concerns raised by Indigenous and other communities directly impacted by pipelines, or the people who pay the dearest price. The government should never have bought this pipeline,” Singh said. “It is clear to Canadians that this is not a sound investment."

"This is a decisive victory for all the parties involved in this case fighting to stop Kinder Morgan, including the government of British Columbia," May said on CTV News Channel. She also called the ruling a “fatal blow” to the pipeline, questioning how the Trudeau government will proceed.

"I believe our federal government are good people, they tried to do what they believed was the right decision, but now they’re going to have to take a second look and they’re going to have to find a way to work with all of us… and this is what in my mind, today really represents, building a relationship for Canada," Thomas said during a joint press conference with several First Nations in Vancouver, B.C.

"We are reviewing the decision with the Government of Canada and are taking the appropriate time to assess next steps. We remain committed to building this Project in consideration of communities and the environment, with meaningful consultation with Indigenous Peoples and for the benefit of Canadians. Trans Mountain is currently taking measures to suspend construction related activities on the Project in a safe and orderly manner," Anderson said in a statement.

"I'm not unlike many, many British Columbians who have held the view that our coast was not considered by the National Energy Board and I feel that those citizens have been vindicated today," Horgan said.

"I've always felt that if you do what’s right for the majority of people, you’re going to get the outcome that they want, and I think that we’ve done that today."