What has Erin O'Toole promised to do as Tory leader?

OTTAWA -- The Conservative Party of Canada has a new leader. His name is Erin O’Toole and he won the party’s leadership race with 57 per cent of the vote after a ballot count delayed by thousands of damaged ballots

His victory came in part due to key support in the prairie provinces and Quebec, a strong social media presence, and his welcoming of the range of viewpoints within the party.

O’Toole took populist policy positions looking to appeal to the base of the party, describing himself as the "true blue" candidate and promising to “to put Canada first.”

The Ontario MP takes the helm of the federal Conservative parliamentary caucus of MPs at a key time, one that could see him running to be Canada’s next prime minister as soon as a month from now.

In his first speech as leader he made the pitch to non-Conservative voters to “socially distance themselves” from their political affiliations and consider his party.

So, what can party members and Canadians expect from O’Toole as the new Andrew Scheer? Here’s a look at some of what he promised to do during the campaign if he became leader.

O'Toole has routinely touted his standing as a current MP as a key asset in holding the Liberals to account “on day one.”

In his victory speech early Monday, O’Toole spelled out how he plans to lead an effective Official Opposition, including continuing to “point out Liberal failings and corruption.”

He has yet to weigh in on whether he’ll be ready to take down Prime Minister Justin Trudeau’s minority government in a fall confidence vote, but he’s been one of the strongest critics of the ongoing WE Charity student grant controversy. His first speech as leader included a dig on the ongoing ethics probes into Trudeau and former finance minister Bill Morneau, saying it’s time to give the federal ethics commissioner “a break.”

Expect O’Toole to reconfigure his front bench ahead of the new session of Parliament getting underway on Sept. 23. Typically, new leaders like to shuffle the deck of their critic portfolios, or “shadow cabinet” to reward MPs who backed them in the campaign.

It’ll also be up to O’Toole to determine how he treats those who did not support his leadership, as caucus unity will be essential heading into the next few months.

Appearing to try to avoid what became a repetitive burden for his predecessor—questions about his LGBTQ and abortion policies—O’Toole stated in his first speech as leader that there is a place in his party for all Canadians, regardless of race, religion, or sexual orientation, though he is set to face questions about what that will look like in practice.

O’Toole ran a campaign that included expressing openness and acceptance of the social conservative cadre of the party and in the end he picked up necessary down-ballot support from third and fourth-placed socially conservative candidates Leslyn Lewis and Derek Sloan, while alleging Peter MacKay was trying to divide the party with his progressive views and suggestion that social issues were the party’s 2019 downfall.

He campaigned on marching in pride parades so long as first responders could too, and said that while he is pro-choice, he’d defend the conscience rights of health-care practitioners.

National President of the Campaign Life Coalition Jeff Gunnarson said O’Toole’s win shows that social conservatives “continue to be a major and irreplaceable part of the CPC base,” though Conservative MP Michelle Rempel predicted that “under O'Toole, we'll have room to earn the trust of women and the LGBTQ community.”

It remains to be seen how the various factions within the party and caucus feel about coming together, and what O’Toole will do about Sloan—whose remarks have prompted calls for him to be ousted from caucus—given the new leader’s strong stance on defending free speech.

O’Toole’s win as Conservative leader comes as Canada continues to battle the COVID-19 pandemic, and he has already started making the case that his party would be better suited to lead the country at this time.

“We just emerged from the first wave of the largest health crisis in our history. Premiers across our country have shown real leadership amid the COVID-19 crisis,” O’Toole said in his Monday speech.

“We can rebuild our great country while protecting Canadians from the ongoing threat of COVID-19. We can get Canadians back to work… We must have a government that will keep us safe and ensure that we are never ill-prepared again.”

O’Toole has vowed that if he were prime minister, he would plot a path to balance the ballooned $343-billion federal deficit and “wind down” the emergency benefits, including the Canada Emergency Response Benefit (CERB).

He also said he’d study how to extend Employment Insurance, something the Liberals are currently working on.

While not a COVID-19 specific program, O’Toole has said that a government led by him would expand the Canada Child Benefit, by allowing benefits to begin for the first child earlier.

The Conservatives’ position on climate change has been a central focus over the last number of years, and O’Toole has taken the position of letting the provinces and territories decide how they want to tackle their greenhouse gas emissions.

“A carbon tax is not an environmental plan, it is a tax plan. We need a smarter approach, one which recognizes that Climate Change is a global problem, that requires a global solution,” reads his platform.

He also outlined an entire Alberta-focused plank of his platform, including commitments to repeal Trudeau’s environmental regulation legislation.

Citing the challenge of western alienation, O’Toole promised to respect Albertans and their energy sector, gaining him the endorsement of Alberta Premier Jason Kenney in the leadership race.

“Erin is a brilliant, principled patriot who is driven by a desire for a stronger Canada. He is committed to a fair deal for the West and a strong future for our resource industries,” said Kenney in a tweet after O’Toole’s win.

HE WANTS TO DEFUND THE CBC

O’Toole also campaigned on defunding portions of the Canadian Broadcasting Corporation, rolling back funding within his first mandate should be become prime minister.

The program he is referring to is the Liberals’ pledge to roll out nearly $600 million in subsidies to select news media outlets, with the intent of supporting Canada’s journalism sector.

Because the funding is aimed at bolstering the print news industry, CTV News and other major broadcasters don’t qualify.

O’Toole’s position was echoed by Scheer in his final speech as leader where he implored Conservatives to be wary of “mainstream media bias.”

The O’Toole campaign also made promises to “focus on criminals” with a suite of Criminal Code reforms, cracking down on certain offenders, as well as promising to reverse any Trudeau-era gun law changes if the Conservatives form government.

On foreign policy he wants to see a new Canada-Australia-New Zealand-United Kingdom (“CANZUK”) agreement within the first 100 days of an O’Toole government, and he’s also taken a hard line on China.

“Canada and the world deserve a strong and principled foreign policy that truly aligns with Canadian values and interests – one that focusses on strengthening alliances with like-minded countries, facing down the threat posed by China,” read his foreign policy plans, in part.

As for defence and veterans’ affairs -- two files close to the former Air Force navigator -- O’Toole wants to see an increase in spending, fast-track procurement, and streamline benefits for former soldiers. 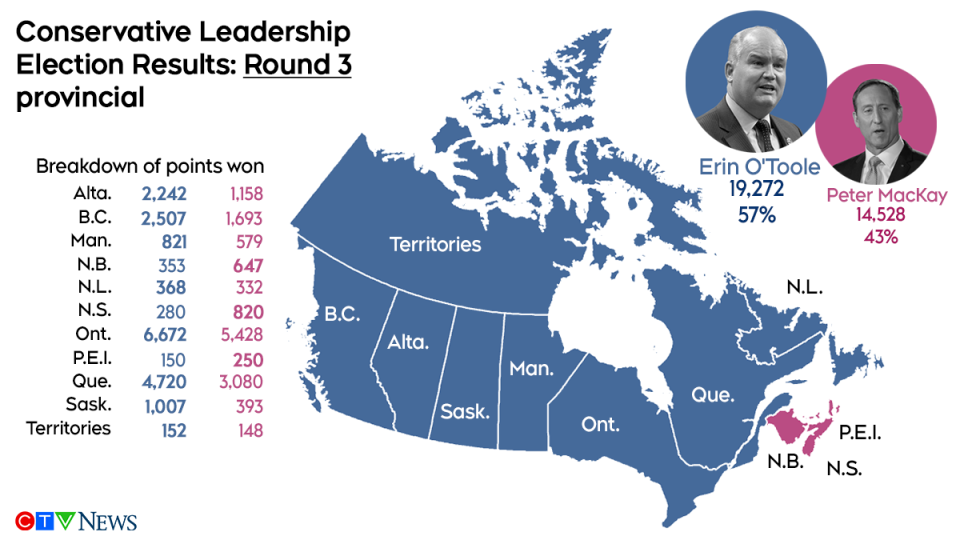