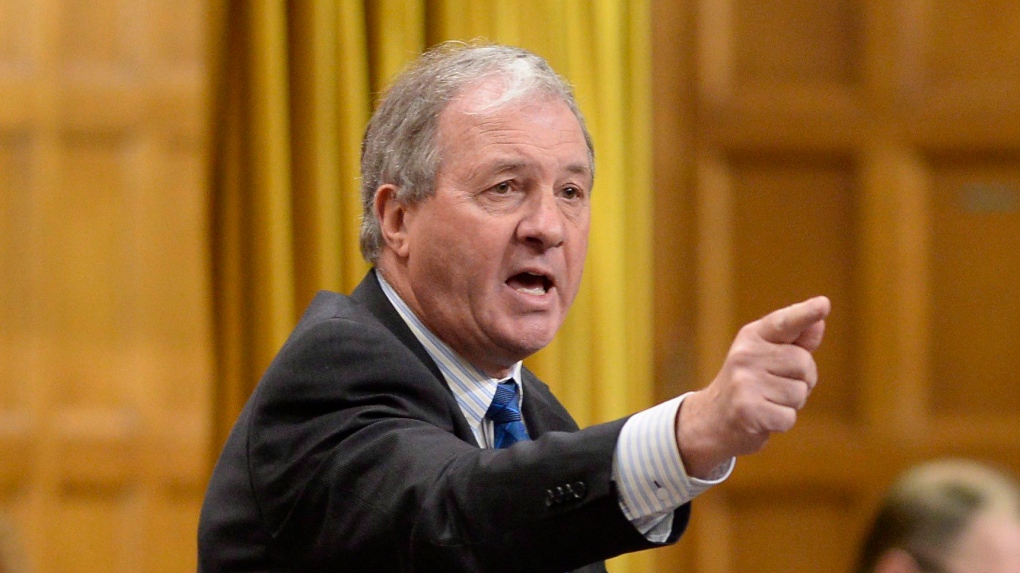 Conservative MP Ron Liepert asks a question during Question Period in the House of Commons on Parliament Hill, in Ottawa on Friday, March 24, 2017. THE CANADIAN PRESS/Justin Tang

OTTAWA -- Ron Liepert says these days, the phone calls and emails from people wanting to talk about his party's climate plan have slowed.

One month ago, the Conservative MP for Calgary Signal Hill was answering at least a dozen or more emails a day, and another half a dozen calls.

Explaining the Titanic-sized shift in the Conservative heartland -- particularly on a policy championed by Prime Minister Justin Trudeau, whose Liberals hold no seats in Saskatchewan and Alberta -- has been something those representing the region's resource-rich farmlands and cities have had to figure out.

Saskatchewan, Manitoba and Alberta, along with Ontario, waged a years-long battle against the federal Liberal government's charging of a federal carbon price on consumer goods in provinces that do not already have one. It went all the way to the Supreme Court, which ruled in March that Ottawa's backstop was constitutional.

The Canadian Press contacted each of Saskatchewan's Conservative MPs and most of those in Alberta to discuss reception to the Conservative party's own carbon-pricing plan. The majority declined to comment, or didn't respond.

In fact, any mention of the climate policy -- unveiled by Conservative Leader Erin O'Toole as a major plank in an eventual election platform -- is absent from many of their social media.

For Liepert, a veteran of Alberta politics, it's obvious the party needs more wins in Ontario to form government and felt it was time to shed its anti-carbon price stance.

"If you start from that premise, that Canadians have grudgingly accepted a carbon tax, then how do we pivot away from having a position where we will cancel the carbon tax?"

Pitching the Conservatives' fuel price comes down to persuading people it's not a tax, he says. It's also what O'Toole, who ran as the "true blue" candidate in the party's leadership race, has rigorously maintained.

"Let me give you this analogy: When you go to the liquor store and you pick up a 24 case of Pilsner, there's a 10 cent per can levy attached to that, correct?," said Liepert, describing how he sells the plan.

"And they'll all agree with that, and I say, `You don't consider that a tax do you?' And they say, `Well no, because I get it back when I take my cans back.'

And I say, `Well bingo. Same thing with this.'"

Liepert says most people tend to "grudgingly agree," with his answer, but there are always those who will feel "a tax, is a tax is a tax."

Besides what to call it, Conservatives say what distinguishes their party's proposed carbon price from the Liberals' is when people pay it, their money will be sent to a savings account that is like a rewards card. They'll then be able to use the money in that fund to make government-approved environmentally friendly purchases.

O'Toole says people should imagine being able to use these carbon bucks to buy anything from a bike and transit pass to an electric vehicle and, according to one op-ed he penned, even locally grown produce.

"It's certainly a creative policy," said Michael Bernstein, executive director of Clean Prosperity, a group that has been advocating for the Tories to adopt carbon pricing since its 2019 election loss.

"It is very difficult to understand how it's going to actually work."

"Everybody was somewhat surprised, sure, but at the same time, once I read through it, and I did take a great deal of time first just to get my own head around the whole plan, so that I could understand it," she said.

Wagantall feels assured provincial decisions around climate will be respected, which she says is something that caucus stressed. And like Liepert, she's had many talks with upset or confused constituents.

"I have the conversation around what the prime minister of the day is doing and it brings them to a realization that we're in an environment where that is an expectation, it's true, but what we are doing is very, very different."

"The longer we talk, the more understanding they are and they simply want to have that conversation. I haven't had a circumstance where I felt I wasn't heard."

But not all conversations appear to be as cordial.

During an exchange with a critic about the party's carbon price on Regina MP Michael Kram's Facebook page, user Amos Dowler wrote: "Even Premier (Scott) Moe agrees that O'Toole's plan is far better than the current plan. Maybe read it or get someone to read it to you."

A person answering the phone at Kram's constituency office said Dowler was Kram's chief of staff. His personal LinkedIn page also lists him in that role. An assistant for Kram declined to respond to his comments.

Liepert says he can't tell whether he risks losing voters, even as several emails a day land in his inbox from those voicing disgust with the Conservatives and teasing their support for the fledgling Maverick Party, led by former Tory MP Jay Hill.

It brands itself as offering "true western representation" by only running candidates in the Prairies and criticizes O'Toole for having a "phoney carbon levy."

But the Conservatives' primary foe remains a Liberal government that is ratcheting up its promises to reduce carbon emissions.

Trudeau has pledged to further cut Canada's emissions of heat-trapping greenhouse gases by up to 45 per cent below 2005 levels by 2030. He has also committed the country to reach net-zero carbon pollution by 2050.

O'Toole's plan is designed to reach the country's current targets under the Paris Agreement of a 30 per cent reduction by 2030. He has dissed the Liberals' tougher goal.

His MPs also voted against the government's net-zero legislation, citing the possible influence "climate activists" on a net-zero advisory panel could have on the oil and gas industry.

But despite what progress has been made, O'Toole's attempt to straddle the climate fence may cost him with the new voters he's hoping to attract.

"Expectations of voters, although we'll have to probe this in polling, are likely to continue to evolve as well in terms of what they expect from a credible plan," said Bernstein.

"There is a chance that O'Toole is out of step with that."

This report by The Canadian Press was first published May 16, 2021.