War of words: Current, previous NDP leaders spar over state of the party 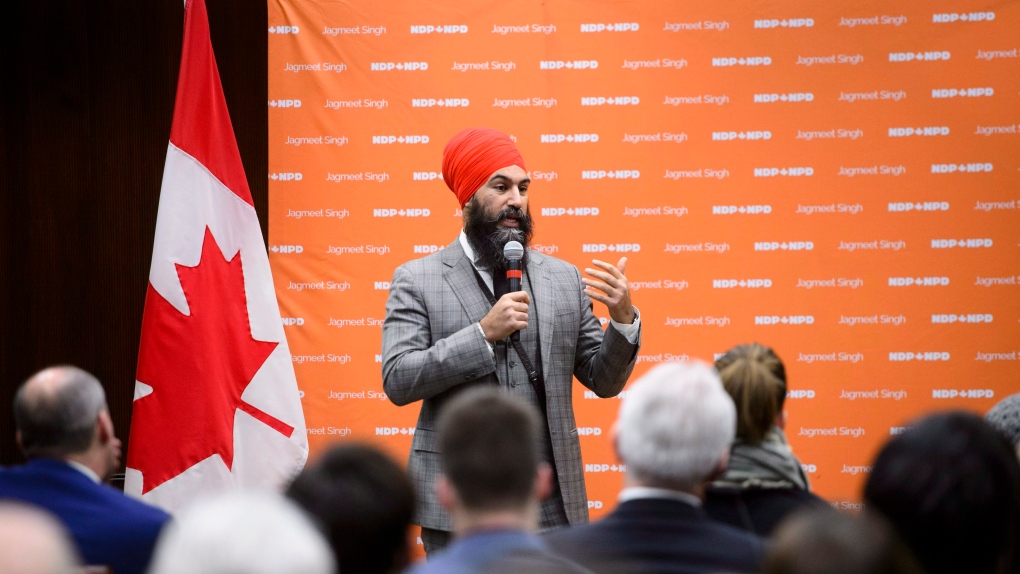 NDP Leader Jagmeet Singh addresses his NDP staff as they gather for their annual Staff Forum in Ottawa on Tuesday, Dec. 4, 2018. THE CANADIAN PRESS/Sean Kilpatrick

OTTAWA – As he kicks off a high-stakes campaign to win a seat in Parliament while making the a case for why he should remain leader regardless of its outcome, NDP leader Jagmeet Singh says he's been able to turn the party around from the time Tom Mulcair was at the helm.

Asked about the fate of his party pending the outcome of the Feb. 25 Burnaby South byelection, Singh spoke of the state that the party was left in when he entered the picture.

"I'm really proud of our party given that we had two years where we had a leader that was effectively voted out, and things were really tough, we had horrible fundraising in that period of time, and we had not a lot of traction," Singh said.

"Despite that it shows how resilient our movement is… the fact that it still stayed so steady and now we've actually turned things around."

This comment wasn't received lightly by former NDP Leader Tom Mulcair, who took these remarks as a direct criticism of his tenure.

In a separate interview on CTV’s Question Period, Mulcair was asked to respond to his replacement offloading some of his party's political hardship on him.

"With regard to fundraising I mean, there are opinions but there are also facts. I'm proud to say that while I was leader of the NDP I raised more money than any other leader in the history of the party and that's a fact," Mulcair said.

Singh has been leader of the federal New Democrats since October 2017, and with nine months until the next election, the party is continuing to trail the Liberals and Conservatives when it comes to fundraising and support in the polls, both measures have remained low since the party fell from official opposition to third party in the 2015 election under Mulcair.

Despite this, Mulcair still thinks Singh may be able to pull off his all-important byelection win, but warned that it may come at the price of potentially holding on to his old seat, in Outremont, Que. because all of the NDP’s resources will be focused on Burnaby South.

This comes after Mulcair said earlier this week on CTV’s Power Play that it would "be extremely difficult" for Singh to stay on as leader if he loses the byelection in response to Singh vowing that he will "absolutely" be the leader that leads the New Democratic Party into the 2019 general election.

Mulcair questions if Singh is up to speed

This was not the only area in which the former leader questioned Singh, he also raised whether he's able to stay on top of the issues of the day.

In the interview airing on Sunday, Singh was asked to respond to China’s Ambassador to Canada alleging that “white supremacy” is at play in Canada’s demand that two citizens detained in China be released. His comments were made in an op-ed published in The Hill Times newspaper on Wednesday.

"Sorry, who accused who of white supremacy?" asked Singh, before saying "I don't know if there's any evidence of that suggestion." He then continued with general comments about how he was "deeply concerned" about the detentions of Michael Kovrig and Michael Spavor.

Commenting on Singh apparently not being aware of the Chinese ambassador's comments, Mulcair called it "surprising," given the prominence of the ongoing diplomatic dispute between Canada and China, sparked by Canada's arrest of Huawei executive Meng Wanzhou.

"It was very surprising that an issue that was on the front pages, not just in Canada, but in New York and in London, there are a lot of people who have paid close attention to what was being said here. It was a pretty shocking statement and I was a little bit surprised to find out that it was news for Mr. Singh," Mulcair said.