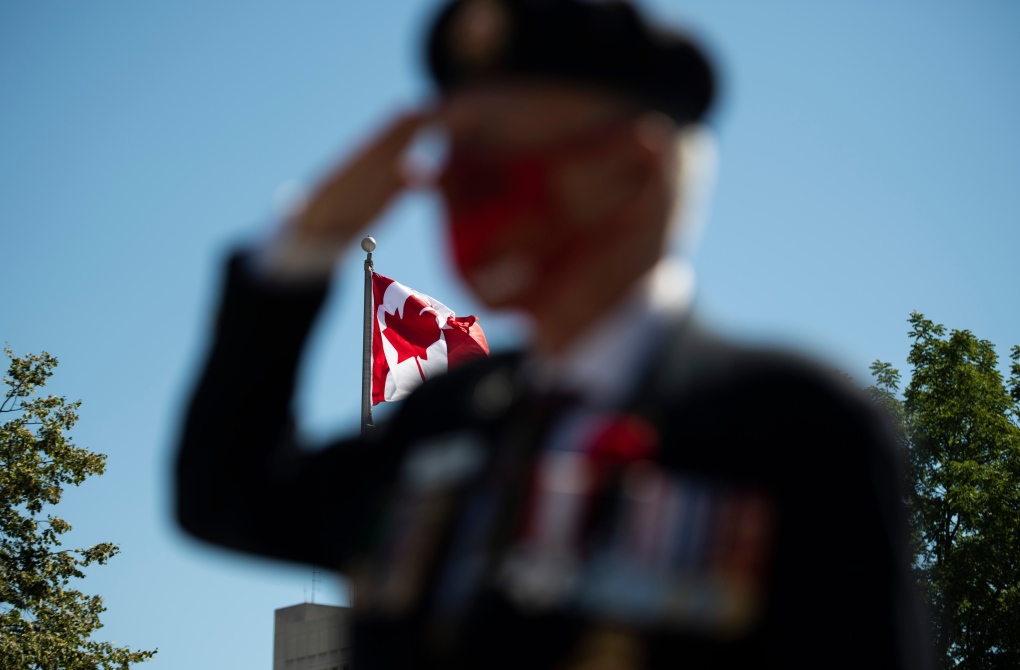 The Canadian flag is seen as a veteran salutes during a ceremony marking the 75th anniversary of V-J Day and the end of the Second World War, in Ottawa, on Saturday, Aug. 15, 2020. (THE CANADIAN PRESS/Justin Tang)

The reports obtained by The Canadian Press through the access-to-information system are separate from the controversy surrounding the backlog of tens of thousands of applications from veterans for disability benefits.

They also follow a previous warning from the federal auditor general about former soldiers facing long waits for badly needed mental-health services, with the reports blaming the growing delays on a soaring demand for help over the past five years.

Experts say the new reports are concerning because of the importance in responding to requests for mental-health support as soon as possible to keep veterans from having to struggle on their own.

"Making people wait, they might not go back, they might not follow up, they might fall through the cracks into these gaps that we know exist across the mental-health service space in Canada. And we have to make sure that we are avoiding that at all cost."

Prepared quarterly, the reports provide information on how long veterans are having to wait before getting first appointments for several medical services at 10 operational stress injury clinics set up across Canada.

First established in 2002, the clinics are now located in most major cities across Canada and include teams of psychiatrists, psychologists, social workers and other specialized mental-health professionals.

Each clinic is designed to assess and treat the mental-health needs of veterans as well as serving military personnel and RCMP members through one-on-one therapy and group sessions.

The most recent report, covering the period between April and June 2020, shows most veterans waited less than two weeks -- and half only two days -- before one of the clinics responded to their first phone call or other request for help.

That was unchanged from the same quarter in 2018, even though the later period coincided with the start of the COVID-19 pandemic, resulting in lockdowns across the country. In fact, it was even an improvement over the year preceding the pandemic.

Yet the report also shows most veterans had to wait months -- in some cases more than seven months -- for their first appointments with psychiatrists or to start work on treatment plans. The same was true for getting medical exams to apply for disability benefits.

While the pandemic appears to have made it harder to get a medical exam or first appointment to start creating or implementing a treatment plan, the report shows wait times for both have been steadily growing since at least 2017.

War Amps Canada executive director Brian Forbes, who is also chair of the National Council of Veterans' Associations, said the growing delays for medical exams underscore the challenges many disabled veterans have just applying for benefits.

Such exams are needed by Veterans Affairs Canada to approve a veteran's application before they can get any type of help.

"If you can't get to the doctor or the psychiatrists or the clinic, you're obviously stuck in another kind of backlog because you don't even get to first base," said Forbes.

Many veterans actually got their first appointments with psychiatrists faster during the start of the pandemic. But they had still been waiting in many cases more than two months longer than colleagues who saw psychiatrists in 2017.

While the reports only extend as far as the start of the pandemic, COVID-19 has created a surge in demand for assistance as veterans have seen their normal outlets and support networks dry up, Thorne said.

"There's just kind of an increasing urgency behind them because of the stress that people are dealing with in their day-to-day life," he said, adding many veterans often only come forward when they are in great need.

"Looking at these numbers, what's potentially worrying is the amount of time between first contact and when the treatment plan begins. And so my followup question would be: How much other type of support is available for them in that interim time?"

The reports note that the number of veterans referred to the government-run clinics even before the pandemic had nearly doubled between 2015 and 2020, which "had a negative impact on wait times."

Veterans Affairs spokesman Josh Bueckert also blamed longer treatment times for veterans than non-veterans and a shortage of mental-health workers across the country, "especially with psychiatrists and psychologists, causing occasional staff vacancies in some clinics."

"In order to address this situation, Veterans Affairs Canada has increased funding for OSI Clinic recruitment and specialized training of other types of mental health professionals," Bueckert said. The department has also recruited local health providers to help out.

Veterans are also screened when they first reach out to a clinic, Bueckert said, with the most at-risk provided faster service.

Maxwell said there is a clear need for the government to dedicate more resources -- including funding to train dedicated mental-health professionals -- to ensure veterans have ready access to support.

"Clearly, there's a desire to utilize the services based on the numbers that we're seeing in this report," he said. "That just speaks to the need then to keep pace with demand so those veterans can get the care that they deserve, and in a positive way."