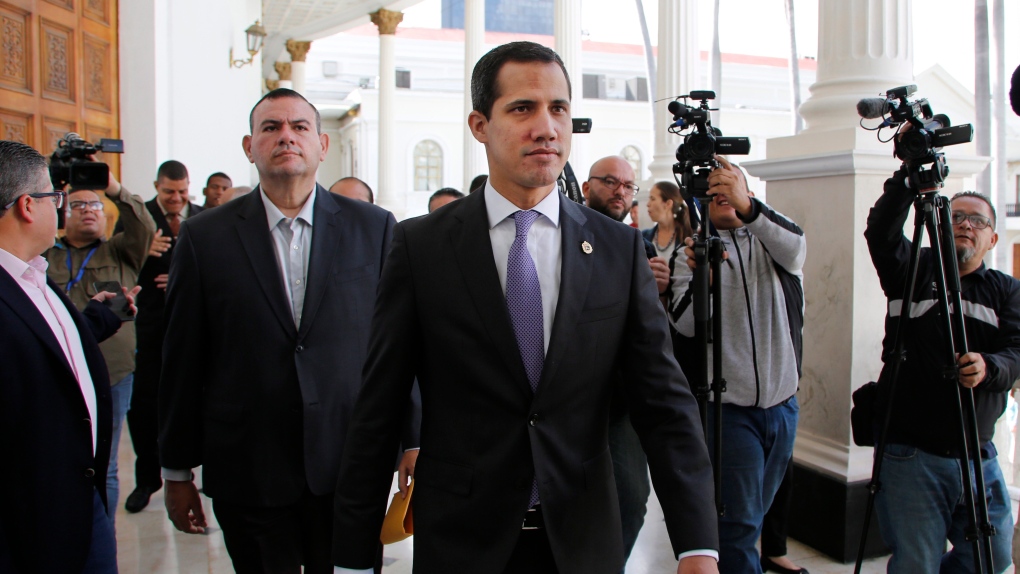 OTTAWA -- Canada wants to "reinvigorate" the effort to bring democracy to Venezuela, Canada's top diplomat said Monday as he welcomed the country's challenger to the current leader to Ottawa to discuss those seemingly bleak prospects.

Foreign Affairs Minister Francois-Philippe Champagne held talks in Ottawa with Venezuelan opposition leader Juan Guaido, who is on a multi-country tour to bolster international support for his effort to replace the country's current president -- Nicolas Maduro -- and lead Venezuela until a transparent presidential election can be held.

The once prosperous and oil-rich South American country has been mired in a political and economic crisis for years, but the reform efforts gained momentum a little more than a year ago when socialist Maduro sought to hold on to power after an election decried by many countries as illegitimate.

Guaido received the support of Canada, along with dozens of nations who recognize him as Venezuela's leader and called for Maduro's ouster. But a year after that push, the situation has essentially stagnated, with Maduro holding power with little significant opposition.

"Make no mistake, the situation there has gone from bad to worse as a direct result of the actions of the Maduro regime," Champagne said.

"Millions have fled the country and millions more are living in extreme poverty."

Later Monday, Prime Minister Justin Trudeau met Guaido -- whom he referred to as the interim president of Venezuela -- in his Parliament Hill office.

Trudeau noted that Canada has been working with Guaido and the Lima Group to put an end to the humanitarian crisis gripping the South American country.

Guaido, speaking through a translator, thanked Trudeau and the people of Canada for their support to address what he called the emergency situation in his country, including an environmental crisis and the financing of terrorist activities. Guaido said his country needs Canada's continued support in the fight for human rights and to achieve stability in Venezuela and its surrounding regions.

Champagne said "something must be done" to "reinvigorate" efforts to resolve the crisis. Canada, he said, wants a peaceful transition to democracy, led by the Venezuelan people with free and fair elections, as soon as possible, under international observation.

Canada has already imposed relatively tough sanctions, targeting 113 people connected to the Maduro government under its so-called Magnitsky law that allows it to sanction individual human rights abusers. It was not clear what else Guaido could ask for in Ottawa.

But the 36-year-old politician, who is defying a Maduro-imposed travel ban by venturing abroad, appeared to appreciate the public show of support.

"This is not one man's fight. This is a fight of all Venezuelans, and we are receiving clear support," Guaido said in Spanish, standing next to Champagne.

"It will depend on how focused the pressure is for an election. That's what happened when we pushed our way into the National Assembly."

Guaido described the pain of families separated from loved ones because of killings and imprisonment, growing poverty, declining health care, and the widespread suffering of children. He said international support was crucial to give hope to Venezuelans.

Champagne said he spoke to his Peruvian counterpart to brainstorm new solutions. In the meantime, there were words of support for Guaido.

"There are no barriers that the president cannot climb," Champagne said.

"We've seen him in action."

Champagne said Guaido has "demonstrated a lot of courage and leadership."

"This is a great opportunity for Venezuelans and for the region to be able to solve the crisis in our country through free elections," Guaido replied through a translator.

"We have no less than five million refugees in the region. This is affecting the entire region."

Last year in Ottawa, Canada hosted the Lima Group, which includes about a dozen like-minded Western Hemisphere countries, minus the United States.

The group's final declaration coming out of the meeting called on the military to switch allegiance and support Guaido as a step towards ending the country's political and economic crisis.

Meanwhile, Venezuelans are voting with their feet by continuing to flee the country in rising numbers as the economy, health and education systems collapse -- a situation widely blamed on Maduro's corruption.

The outflow of Venezuelan refugees is predicted to grow to more than six million by the end of 2020, according to recent estimates from the United Nations refugee agency.

"I commend Interim President Guaido for the courage and leadership he has shown in his efforts to return democracy to Venezuela, and I offer Canada's continued support," Trudeau said in a statement.

"Canadians stand with the people of Venezuela in their pursuit of free and fair elections and basic human rights."