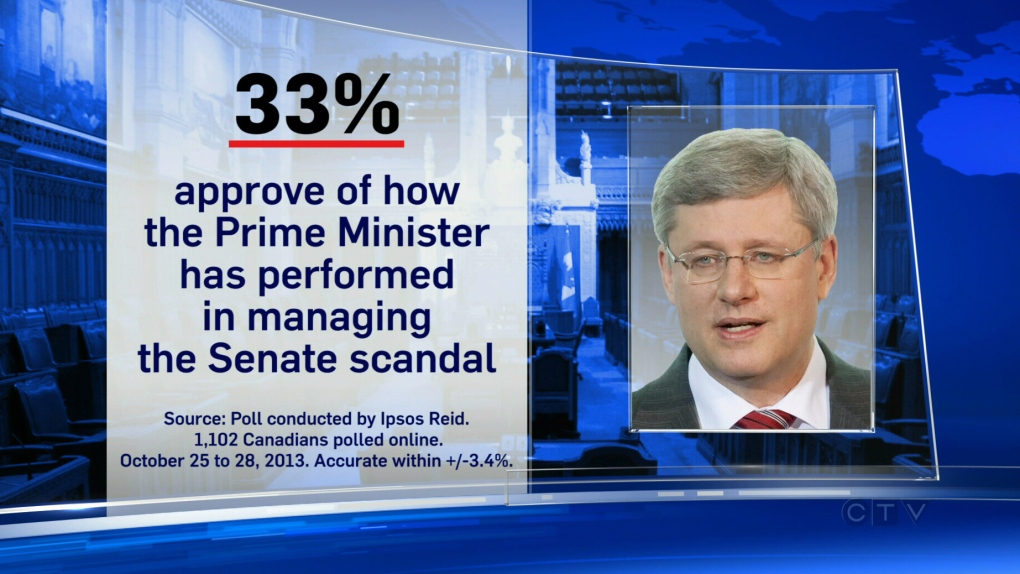 Nearly three-quarters of Canadians say the three senators at the centre of an ongoing expenses scandal should be suspended “without pay,” which is what the federal government is attempting to do this week.

The Ipsos Reid poll conducted for CTV News found that 73 per cent of respondents believe Senators Mike Duffy, Pamela Wallin and Patrick Brazeau should be “immediately suspended from the Senate without pay.”

One-quarter of respondents believe the three senators should be “allowed to collect their pay and sit as senators until the RCMP completes its investigation.”

The poll found that in nearly every province, a “solid majority” of Canadians believe the senators should be immediately suspended and lose their pay.

The slimmest majority is in Alberta, where 54 per cent of respondents believe the senators should be suspended, while 46 per cent said such a move should wait until the RCMP investigations are complete.

John Wright, senior vice president of Ipsos Reid, said Canadians’ lack of sympathy for the senators is likely due to their perception that they have only recently spoken up to defend themselves, after months of negative media headlines.

“The issue of due process is something that in the court of public opinion you could argue, but you should be arguing it at the outset. Most people believe that there’s been a violation of public trust here and that these senators should be gone,” Wright said.

“The fact of the matter is for about the last seven months, Canadians have heard an awful lot about this case, the senators haven’t responded until the last minute.”

The poll found that the scandal has captured the attention of Canadians, with nearly 60 per cent saying they are “closely” following the developments of the Senate expenses scandal, while about 41 per cent said they aren’t paying close attention.

Senators are currently debating motions to suspend Duffy, Wallin and Brazeau without pay for the remainder of the current Parliamentary term, which ends in 2015. They would also not receive benefits or have access to Senate resources.

If a motion to invoke closure on the debate is passed, senators are expected to vote on the suspension motions themselves on Wednesday or Thursday.

The motions allege “gross negligence” over the senators’ expenses, which outside audits found included some ineligible claims. The three were ordered to repay thousands of dollars and their audits have been referred to the RCMP.

The poll results show that one-in-three Canadians “agrees” that they “believe Prime Minister Harper when he says he did not know about his former Chief of Staff, Nigel Wright, writing a personal cheque for $90,000 to pay back Senator Duffy’s inappropriate expenses.”

An overwhelming majority of respondents, 81 per cent, said they “agree” that the “government should have a public inquiry” into the Nigel Wright-Mike Duffy deal, while just 19 per cent “disagree.”

Respondents were also asked whether senators themselves should be left to review the issues raised by the scandal. Nearly two-thirds, or 62 per cent, of respondents said they “disagree” with the statement that “the Senate itself can conduct a thorough and trustworthy review of issues related to the expenses of Senators.” About four in 10, or 38 per cent, said they “agree” with that statement.

Across the country, respondents who believed the Senate can handle the issue included:

Meanwhile, more Canadians believe the Senate should be reformed or abolished in the wake of the scandal.

In the latest poll, 49 per cent of respondents said the Senate should be “reformed to make it, for example, an elected body,” which is up seven points from early this year.

The poll was conducted between Oct. 25 and Oct. 28, 2013, and sampled 1,102 Canadians from Ipsos’ Canadian online panel. The findings are considered accurate to within +/- 3.4 percentage points.