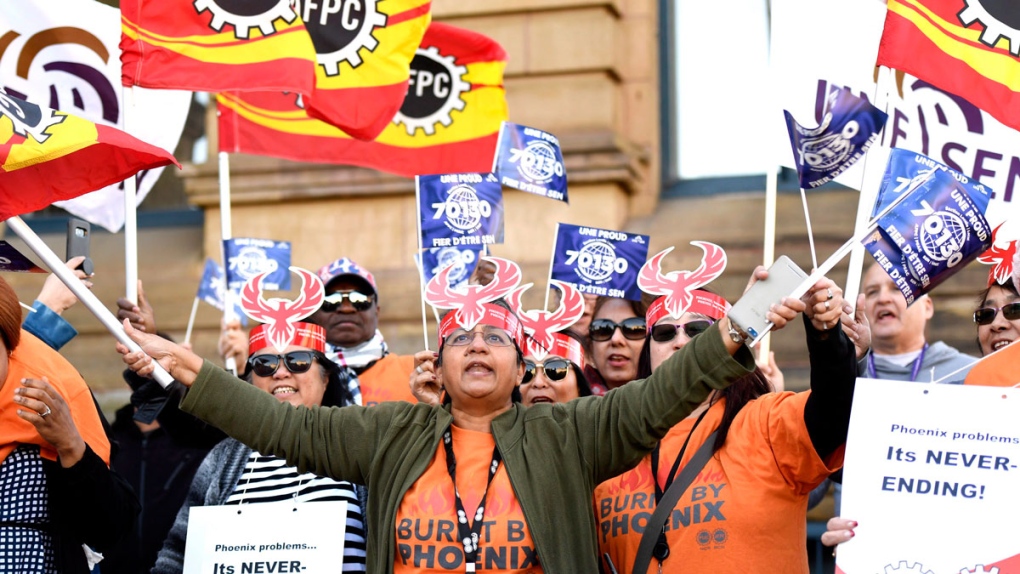 Public servants protest over problems with the Phoenix pay system outside the Office of the Prime Minister and Privy Council in Ottawa on Thursday, Oct. 12, 2017. (Justin Tang/THE CANADIAN PRESS)

OTTAWA -- The Public Service Alliance of Canada (PSAC) says it has reached a deal with the federal government to compensate 140,000 public service workers over Phoenix pay system related damages.

All eligible members of the largest federal public service union who have been directly or indirectly impacted by the problem-plagued federal payroll system, are set to receive a $2,500 one-time payment.

The compensation includes money for the late implementation of collective agreements over the years when the government was trying to get the program under control. The payments are broken down by year, with $1,000 for fiscal year 2016-17 and $500 for each of the three years since.

The union says all members paid through the system are eligible to claim each designated amount for each year in which they were employed, including former federal workers or their estates.

The deal was reached on July 9. In a statement, Treasury Board President Jean-Yves Duclos said he is “pleased,” with the “tentative agreement.”

“All employees represented by PSAC will receive compensation for the toll that the Phoenix pay system has had on their lives. This is a testament to our commitment to reaching fair and equitable agreements, mindful of today’s economic and fiscal context,” Duclos said.

Over the course of the implementation of the now years-old payroll system, thousands of employees experienced being underpaid, overpaid, or not paid at all as the government tried to triage what quickly became a massive backlog in cases of pay issues that left many workers in financial hardship for months.

The agreement also includes changes to the current claims process for out-of-pocket expenses and other financial losses related to the faulty payroll program, as well as additional compensation for “severe impacts and other demonstrable cases.”

These severe cases included workers who accumulated outstanding debts due to missing payments, or who lost their cars, homes, or other major financial assets as a result of not being paid properly.

“This new agreement is a substantial improvement from the one negotiated by other federal bargaining agents,” said PSAC in a statement. Other federal unions have already agreed to offering impacted members an additional five days of paid sick leave, but PSAC calls that offering “meagre,” and not equitable as it “rewarded the highest earners and punished those with lower wages when cashed out.”

The Phoenix system, initiated by the previous Conservative government in 2009, was meant to streamline the payroll of public servants and save more than $70-million annually. But after problems with the system emerged, the previous public services and procurement minister told CTV News back in 2017 that it was possible the cost to get things under control could hit $1 billion.

After it went live in April 2016, the government had to hire more staff and set up satellite pay centres in Gatineau, Montreal, Winnipeg, and Shawinigan, Que., to try to chip away at the pile of problem cases.

As of June 24, according to the public service pay centre dashboard that’s been reporting the status of resolving cases, there were still 125,000 financial transactions to be made beyond the normal workload, and the percentage of cases being processed within the service standards was at 71 per cent, with a target of 95 per cent.

The initial promise from the department was to have the backlog of problematic pay cases resolved by the end of October 2016.