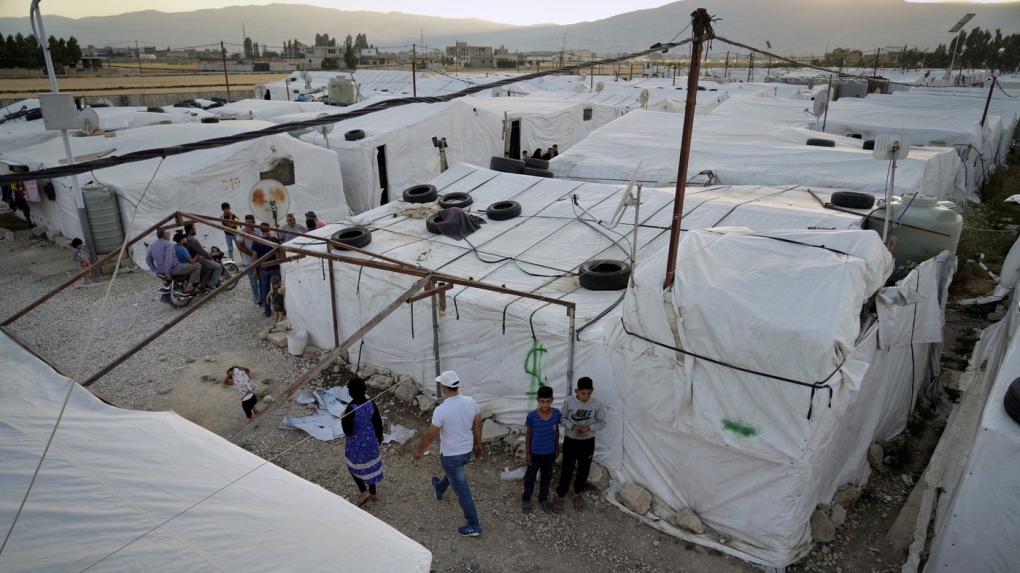 Syrian refugees walk by their tents at a refugee camp in the town of Bar Elias, in the Bekaa Valley, Lebanon, July 7, 2022. A funding shortfall for fragile Middle Eastern states who host refugees could lead to turbulence in international relations, warns the UN refugee chief for that region. (THE CANADIAN PRESS/AP-Bilal Hussein)
OTTAWA -

A funding shortfall for fragile Middle Eastern states that host refugees could lead to turbulence in international relations, the UN refugee chief for that region is warning.

"The international community needs to carry part of its shared responsibility," said Ayman Gharaibeh, the United Nations High Commissioner for Refugees director for the Middle East and North Africa.

He said during a visit to Ottawa this week that the "political perception" and the "optics" of the reduced funding could spell a difficult path ahead -- and though Canada is one of the few countries maintaining its support, he is urging Ottawa to pressure its allies to do the same.

The region Gharaibeh oversees is the site of numerous migration crises, with Syrians languishing in neighbouring Lebanon, Turkey and Jordan for the past decade and Yemenis displaced within their own country amid civil war.

Countries such as Iraq and Jordan have used UN funds toward expanding their school systems to absorb large numbers of refugee children, in an attempt to prevent those fleeing conflict from growing up illiterate.

Gharaibeh argues that keeping that funding flowing is the only short-term solution to political crises that have no end in sight, and thus no timeline for when refugees can come home.

"We have no other option but to continue sustaining these programs at a reasonable level so that these refugees can live in a decent life until we find a solution," he said.

"We don't want any of these states, particularly the smaller ones, to feel like they're left holding the baby on their own now, with no sufficient international support."

Yet that's exactly what the UN fears. Countries have been warning that they can't fund refugee programs at the same rate as in past years.

"We hear from all governments that budgets are under pressure, because of COVID (and the) rising cost of living," said Gharaibeh. "This signal of reduced funding may shake that very important relation and status that we have established with the host states, and with refugees."

Amnesty International warned in October that Syrians being voluntarily sent home from Lebanon can't make a free and informed decision to return, while Turkey has repeatedly threatened to send refugees onward to Western countries if European countries withhold aid.

Meanwhile, the cash-strapped UNHCR has been grappling with donor shortfalls and rising costs.

Gharaibeh's team gives monthly replenished ATM cards to urban refugees, so they can pay for rent and electricity. He now has to either fund fewer families or reduce the amount that each receives.

At the same time, the Middle East relies on Russia and Ukraine for flour and fertilizer, meaning that the UNHCR's money buys less food and supplies amid price hikes created by the conflict.

Russia's assault on Ukraine also led to new refugee flows, on top of those stemming from conflict in Ethiopia, drought in Somalia and chaos in Haiti.

"The needs have doubled," Gharaibeh said, even if the budget was to remain flat.

He said he's in Ottawa to ask the government to stick with its current funding promises, consider a boost to its resettlement of refugees and push allies to do the same.

Though other states are wavering under different pressures, he said, Canada has been steady. "They have been the most predictable, reliable and consistent."

Gharaibeh's branch of the UNHCR funds winter needs separately from its general funding, and this is an area where what he calls the "downward slope" in funding is especially visible.

While the agency reached 58 per cent of its funding goal for 2021 by early December last year, governments have only contributed enough to reach eight per cent of this year's goal.

Syrians are opting to return to their country, he said, despite ongoing conflict there. Others who have resisted for years the daring trek across the Mediterranean and into Europe are now deciding to risk the journey.

"The Syrians have not been part of that until recently," he said. "These are all symptoms of a desperate, dire situation."

This report by The Canadian Press was first published Dec. 9, 2022.

This is a corrected story. A previous version reported that Ayman Gharaibeh, the United Nations High Commissioner for Refugees director for the Middle East and North Africa, said small countries without enough support will likely try sending refugees onward to Western countries.

Prime Minister Justin Trudeau says federal health Minister Jean-Yves Duclos was right in saying there is 'still lots of work to do' before reaching a deal with the provinces for increased health-care funding, but that he's 'confident' that the two levels of government will get there.