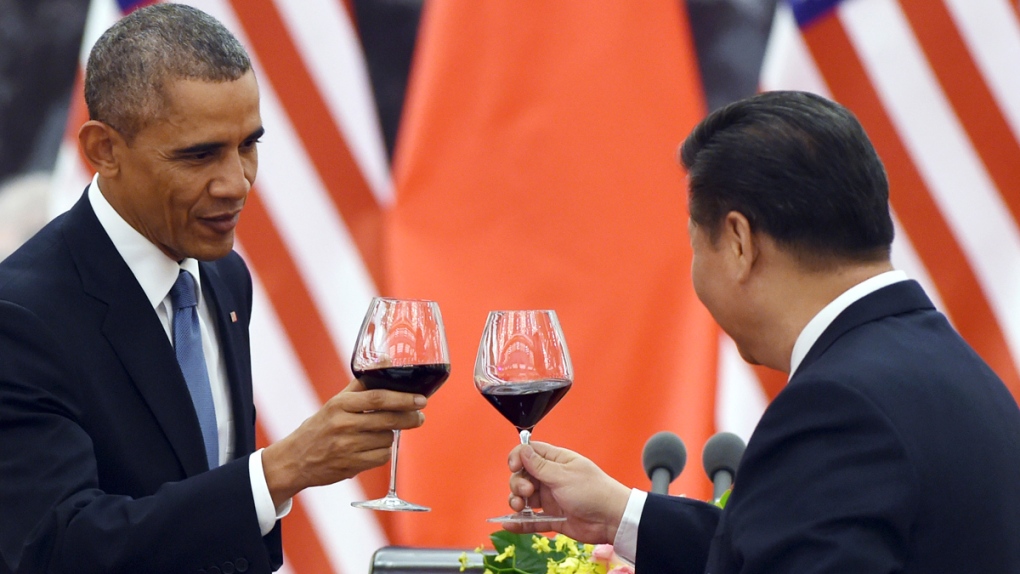 BEIJING -- President Barack Obama and Chinese President Xi Jinping sought to play down points of tension between their two nations Wednesday, unveiling a flurry of agreements on climate change, military co-operation and trade, while casting their own burgeoning relationship as candid and productive.

Yet areas of discord between the world's largest economies still bubbled to the surface. Obama pressed Xi on human rights and the pro-democracy protests in Hong Kong, while Xi repeatedly reminded his American guest that his nation wants to be seen as an equal to the United States.

"I believe that President Xi and I have a common understanding on how the relationship between our two countries should move forward," Obama said as he closed a three-day trip to China. "Where we have disagreements, we will be candid about our intentions, and we will work to narrow those differences where possible."

The two leaders addressed reporters in a rare joint news conference for the Chinese leader, whose government keeps tight control on media in the country. Xi first appeared to ignore a question posed to him from an American reporter who asked about restrictions placed on U.S. news organizations operating in the country, then later suggested it was unfavourable coverage that had led to the crackdowns.

Obama has made significant personal investments in his relationship with Xi, including a two-day summit at a California estate last year. U.S. officials have seen Xi as a potentially new kind of Chinese leader, with closer ties to the U.S. than other Chinese officials -- he spent time in Iowa as an exchange student -- and an ease with public appearances that eluded his predecessor, Hu Jintao.

Yet Xi has consolidated power since taking office, deepened China's provocative maritime disputes with its neighbours and stands accused of continuing cyberattacks against the United States. U.S. officials have new concerns over the potential for a crackdown on pro-democracy protesters in Hong Kong and are warily watching Beijing strengthen ties with Moscow as the West distances itself from Russia.

For its part, Beijing remains skeptical of Obama's intentions in Asia, seeing his efforts to bolster U.S. economic ties in the region as a way of countering China's rise. Speaking through a translator, Xi said "the Pacific Ocean is broad enough" to accommodate the prowess of both the U.S. and China.

Obama's domestic political weakness, particularly following the Democrats' defeats in last week's midterm elections, has also sparked questions in China about whether the U.S. president can deliver on potential international agreements. In the days leading up to Obama's visit, a newspaper with ties to the Chinese government said the American public had "downgraded" Obama and grown tired of his "banality."

The U.S. president dismissed such criticism in China, saying, "I am always working on the assumption that the press gives me a hard time wherever I go, whether in the United States or China."

Obama and Xi did announce a series of agreements through their two days of talks, including a significant joint announcement on greenhouse gases that was the result of months of secret discussions between U.S. and Chinese officials.

As part of the new agreement, Obama announced that the U.S. would move much faster in cutting pollution, with a goal to reduce emissions by 26 per cent to 28 per cent by 2025, compared with 2005 levels. Xi, whose country's emissions are still growing as it builds new coal plants, didn't commit to cut emissions by a specific amount. Rather, he set a target for China's emissions to peak by 2030, or earlier if possible.

Obama and Xi also announced plans to have their militaries give each other more guidance about their activities in the Pacific. There was also an agreement to move forward on trade talks to reduce tariffs on high-tech goods, as well as a deal to extend the lengths of visas granted to U.S. and Chinese citizens.

Human rights has long been an area where the U.S. and China have been at odds. Obama said he broached the topic in his conversations with Xi, saying universal freedoms are essential "whether it is in New York or Paris of Hong Kong."

Chinese officials have suggested the U.S. has played a role in directing pro-democracy protests in Hong Kong, a special administrative region of China. Obama denied those charges Wednesday, saying he had been "unequivocal" in reassuring Xi that the U.S. "had no involvement in fostering the protests that took place there."

In another nod to China's sovereignty, Obama reaffirmed his support for a "one China" policy that regards Taiwan as part of China.

Xi also waded into the issue of human rights, saying his country has made "enormous progress" on the matter.

"That is a fact that is recognized by all people in the world," he said.