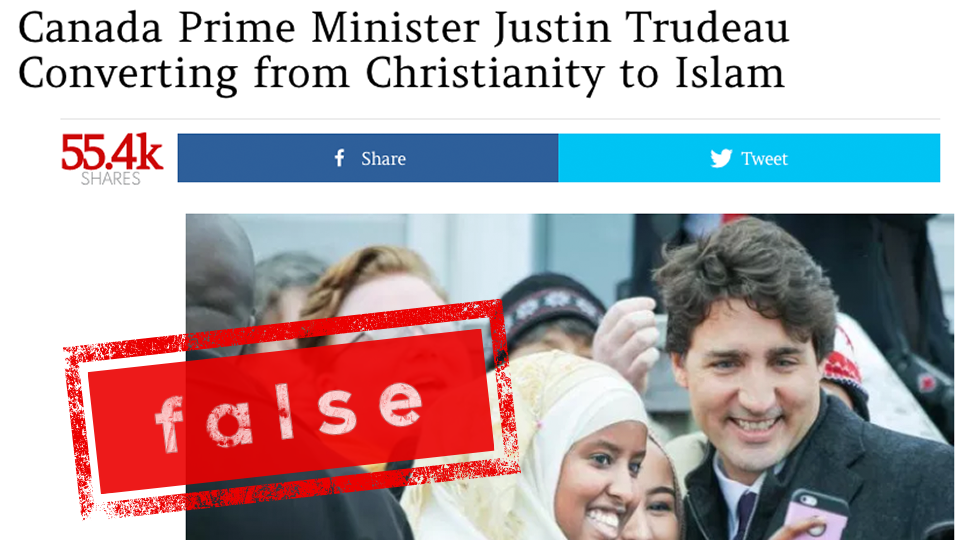 A story making the rounds on social media this week claims Prime Minister Justin Trudeau is converting to Islam, but that's just not true.

An old story from a “satirical” website has been making the rounds on social media claiming that Prime Minister Justin Trudeau has converted from Christianity to Islam, but despite what some may think, the story is not true.

The story, “Canada Prime Minister Justin Trudeau Converting from Christianity to Islam,” was published on the Vatican Enquirer website three years ago. Trudeau is quoted in the post saying he made the decision to convert to Islam “after meeting thousands of new Syrian refugees, listening to their stories and learning more about the Muslim faith.”

The quote used in the story is attributed to website, “TheGlobalSun.com,” but the URL links to a web page that is no longer active. A search of The Global Sun, another satirical website, through Internet archival tool WayBack Machine, reveals a post titled, “Justin Trudeau To Convert To Islam (Muslim).” That post, dated July 4, 2016, contains the aforementioned quote and claims Trudeau announced his sudden change of faith during a 15 minute news conference. It also reference’s Trudeau’s wife and children as being “very supportive of his decision.”

The photos used in the Vatican Enquirer story show Trudeau praying alongside several other worshippers and the prime minister partaking in a meal. The images are similar to ones shared on Twitter by the Islamic Foundation of Toronto on Oct. 21, 2015, just days after Trudeau was elected prime minister.

Imam Shaykh Yusuf Badat confirmed to CTVNews.ca that two of the photos used on the website were taken during a Ramadan event in 2015, before Trudeau became prime minister. Badat said the foundation invited Trudeau to the event, adding that he shared in a meal and delivered a message to those in attendance. Badat also said that some of the other photos on the site appeared to be from an event that happened at a mosque in Surrey, B.C.

The recent resurgence of the story appears to be the result of spam posting on several conservative and pro-Donald Trump social media accounts, according to analysis conducted by Storyful. Over the last week, the post has been shared on at least 71 different social media accounts on Facebook and Twitter. Across all of those accounts, the story racked up more than 9,200 interactions. More than 43 per cent, or 4,002 of those interactions, happened in 2019.

In many cases, the story is being shared by the same person. We took a look at five different Facebook groups where the link to the Vatican Enquirer story was posted. The same individual named “Pat” posted the link over the course of five minutes.

People commenting on the post show many believe the story to be true. One commenter said “when they are done taking over Canada they will get rid of him fast.” Another person wrote: “The takeover of America by Islam is closer than ever right at our doors. Canada’s PM will make it way for that take over. He is the white Obama.”

On its website, the Vatican Enquirer states it’s “a SATIRICAL publication. All stories are only for entertainment and fun, without any compromise with reality. All content is fictional and does not correspond to reality.”

CTVNews.ca asked Rico Torres, the publisher of the Vatican Enquirer, his thoughts about people believing the satirical story. He said, “people want to believe what they want it to be true.”

When asked if satirical content has a place in a world where people get lost in misinformation, Torres said, “I think the world needs more of content that makes us laugh, entertains us, gets us away from some the horrible stuff. Is there a place for satirical content, you betcha!”

CTVNews.ca also reached out to the Prime Minister’s Office for comment on the story. In a statement, a spokesperson for the PMO said “this is false.”

Since becoming Liberal leader in 2013, Trudeau has regularly taken part in various religious celebrations, which include Ramadan, Saint-Jean-Baptiste Day, and Diwali.

Email us by clicking here or visit our Newsbreaker page