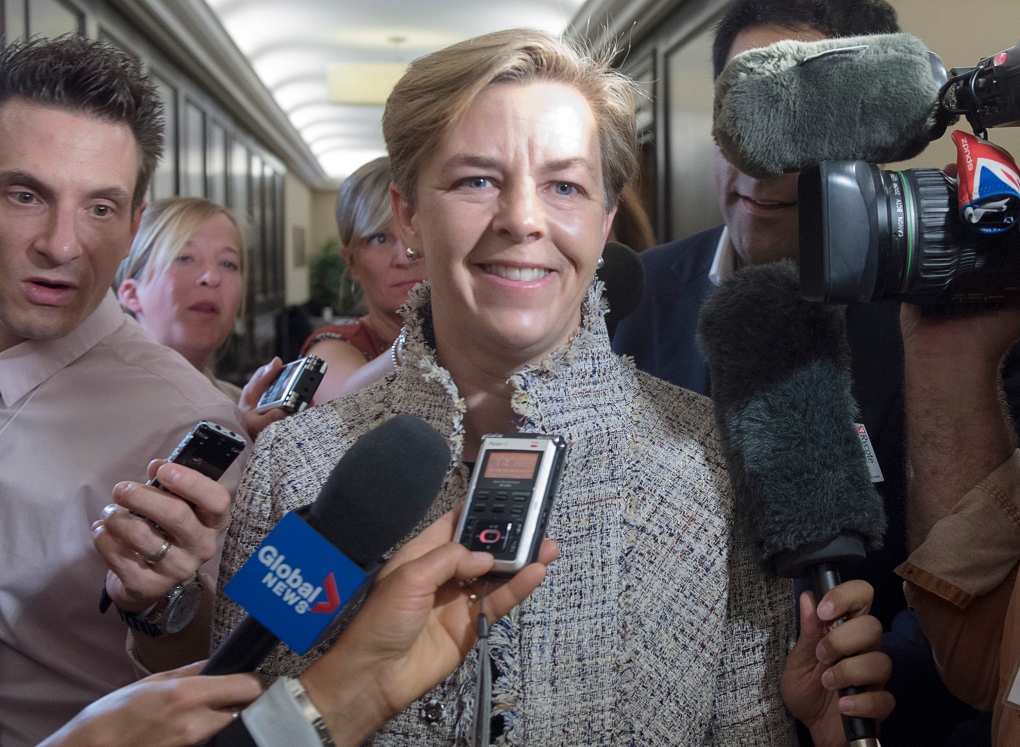 OTTAWA -- Conservative leadership candidate Kellie Leitch says Canadians need to follow the example set by the Americans who elected Donald Trump as president and throw away "the elites."

In an email to supporters, Leitch celebrated Trump's victory and said she wants to bring the same "exciting message" as those who "threw out the elites" in the U.S. It's a message that split the leadership candidates, with two of them firing back to oppose the sentiment.

Leitch, who has proposed screening immigrants for Canadian values, said she looks forward to working with Trump "on issues of common concern."

She also added to the list of people she proposes to screen for values, which she has not yet explained in detail.

"I'm the only candidate who will ensure that every visitor, immigrant, and refugee will be screened for Canadian values," Leitch said in the email.

Asked to clarify to what Leitch was referring in the fundraising email, a spokesman pointed to the negative discretion authority that the then-Conservative government used in 2014 to block a controversial speaker from entering Canada. Chris Alexander, who was then the immigration minister and is now a Conservative leadership contender, used his ministerial discretion to refuse entry to a so-called dating expert who advocated sexual assault.

Speaking in Saskatoon ahead of the Conservative leadership debate, Leitch allowed she doesn't approve of everything Trump says.

"I know he'll respect me and when he talks tough on NAFTA, I can push back and say no, for the benefit of all Canadians, we need to have free trade with the United States," Leitch said.

"[It's] very different than, I think, the approach the elites in the media and others have had, which really has been disconnected from Canadians."

Ontario MP Michael Chong, who is also running for the Conservative leadership, called Trump divisive and said it's a mistake "to ape" his path.

"Canadian conservatives win when we offer voters an ambitious, inspiring and inclusive vision of our country and its potential," Chong said in a statement.

"Kellie's policy of singling out newcomers to Canada for special "values" screening by government is a losing strategy. As Conservatives, we should not support any move to police people's thoughts or subject anyone to an ideological purity test."

Chong said Conservative leadership means reaching out to all Canadians and building momentum in cities among new Canadians.

"Generosity, opportunity, ambition are the by-words of my campaign and foundations of a winning strategy for our party in 2019," he said.

Interim Conservative leader Rona Ambrose touched diplomatically on concerns about what a Trump victory could mean for Canada. The president-elect has pledged to throw out the North American Free Trade Agreement if it can't be renegotiated, and has discussed cracking down on NATO countries that don't hit a certain defence spending threshold.

"The United States is, and will remain, Canada’s closest friend and ally. Our unique relationship has stood the test of nearly 150 years," Ambrose said in the statement.

"As Canada works with the new administration, our focus in the Official Opposition will continue to be on bilateral initiatives that will contribute to the Canadian economy, create jobs, and enhance our collective security," she said, noting the two countries have an ongoing softwood lumber trade dispute.

"We expect the Canadian government to work with the new administration to ensure Canadians and Canadian businesses continue to reap the benefits of the North American Free Trade Agreement, and to advocate for the ultimate ratification and implementation of the Trans-Pacific Partnership Agreement, which seeks to boost trade in the Asia-Pacific region."

Ambrose also called on Prime Minister Justin Trudeau to speak to Trump about his support for the Keystone XL pipeline extension, which President Barack Obama nixed last year. Trump has said he would approve the pipeline, but wants a share of the revenue generated by it.

"He's got off to a good start, and the fact that there weren't a lot of cheap shots taken at the Trump campaign by the Trudeau Liberal government in Ottawa was positive," Baird said in an interview with Don Martin, host of CTV's Power Play.

Former prime minister Stephen Harper congratulated Trump in a tweet that reiterated one of Harper’s priorities from when he was in office.

"There is much to do, [including] moving ahead with KXL," he said in a reference to Keystone.

Congratulations to Donald Trump on his impressive victory. Canada/US partnership is strong. There is much to do, incl moving ahead with KXL.