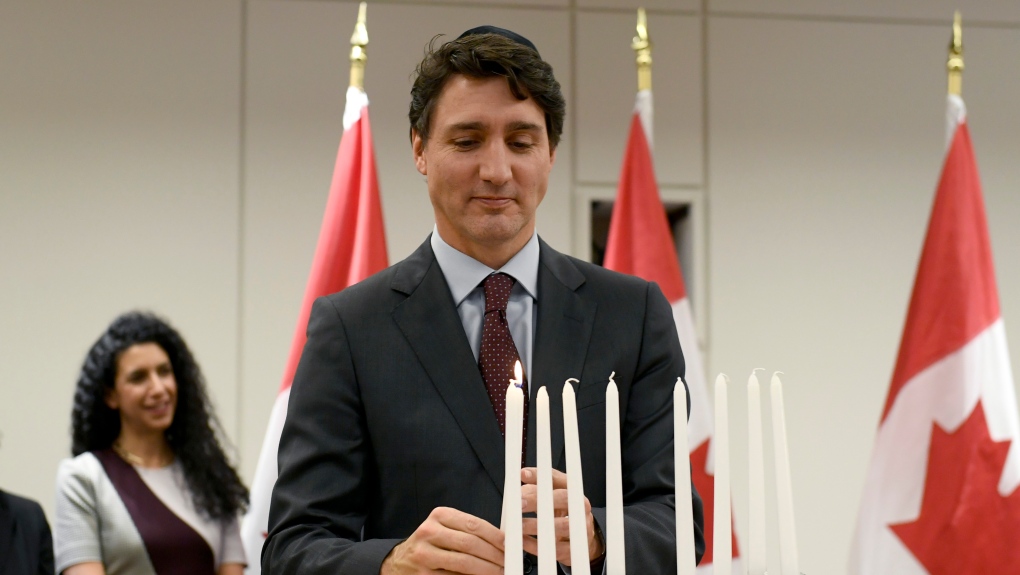 Prime Minister Justin Trudeau participates in a symbolic lighting of the Menorah during Hanukkah on the Hill celebrations in Ottawa, Monday, Dec. 9, 2019. THE CANADIAN PRESS/Justin Tang

OTTAWA -- Prime Minister Justin Trudeau says a recent vote to support a UN resolution endorsing Palestinian self-determination is not a shift in Canada's policy against singling out Israel for criticism on the international stage.

Trudeau made the remarks Monday at a menorah lighting on Parliament Hill, where about 100 parliamentarians and members of the Jewish community gathered to mark the upcoming Jewish holiday of Hanukkah.

Trudeau says he met before the event with Jewish community leaders who expressed their concerns about the United Nations vote in late November.

He says he heard similar concerns from other parties and from members of his own caucus.

The resolution was part of a group of motions brought every year at the United Nations which critics say single out Israel for the ongoing conflict with Palestinians.

For more than a decade, Canada has voted against the resolutions but Trudeau says Canada felt it had to change course on that one resolution, in order to emphasize its support for a two-state solution to the Israeli-Palestinian conflict.

"I hear you," Trudeau told those gathered around the menorah. "I understand that many of you were alarmed by this decision. The government felt that it was important to reiterate its commitment to a two-states-for-two-peoples solution at a time when its prospects appear increasingly under threat.

"But let me be very clear. Our enduring friendship with Israel remains. We will continue to stand strongly against the singling out of Israel at the UN. Canada remains a steadfast supporter of Israel and Canada will always defend Israel's right to live in security. And we will always, always, speak up against anti-Semitism at home and abroad. You have my word."

Canada was roundly criticized for the November vote by Israel, the United States and many within Canada, with several critics accusing Canada of voting with the majority in order to secure a UN Security Council seat next year.

Canada returned to its practice of voting against other resolutions critical of Israel in votes taken this month.

At the menorah lighting, Trudeau and Conservative Leader Andrew Scheer both denounced recent incidents of anti-Semitism aimed at Jewish students at York University, the University of Toronto and McGill University.

"Calling into question Israel's right to exist or the right of Jewish people to self-determination is promoting anti-Semitism and that's unacceptable. We will never, ever be silent in the face of such acts. Hatred has no place in Canada and we will continue to condemn it."