OTTAWA – Prime Minister Justin Trudeau’s principal secretary and longtime friend Gerald Butts has resigned from one of the highest positions within Trudeau’s office amid ongoing questions about alleged PMO interference in a criminal prosecution of SNC-Lavalin.

In a lengthy statement about his resignation, Butts denies the allegations that he or anyone in the PMO pressured Jody Wilson-Raybould -- who was the attorney general at the time -- to have federal prosecutors pursue a remediation agreement rather than criminal prosecution in the corruption and fraud case against the Quebec engineering and construction giant.

"I categorically deny the accusation that I or anyone else in his office pressured Ms. Wilson-Raybould. We honoured the unique role of the Attorney General. At all times, I and those around me acted with integrity and a singular focus on the best interests of all Canadians," Butts said in his statement. "Any accusation that I or the staff put pressure on the Attorney General is simply not true."

Butts said the allegation is distracting from the work Trudeau and his government are doing nine months out from the next federal election, and so it’s in the best interest of the office of the prime minister that he step aside.

"The fact is that this accusation exists. It cannot and should not take one moment away from the vital work the Prime Minister and his office is doing for all Canadians. My reputation is my responsibility and that is for me to defend," Butts said.

The allegations were reported by The Globe and Mail 11 days ago, citing anonymous sources. CTV News has not independently verified the story.

Since then, Trudeau has denied the story, calling it "false," and has offered an evolving series of comments on the matter, including that Wilson-Raybould had an obligation to raise any concerns about feeling pressure with him, and she did not. He also suggested that had Scott Brison not stepped down as Treasury Board president, Wilson-Raybould would not have been shuffled into veterans’ affairs in January, a move that some saw as a demotion linked to her refusal to abandon the prosecution of the case against SNC-Lavalin.

Wilson-Raybould resigned from Trudeau’s cabinet with a "with a heavy heart" five days after the news broke. To date she has said that, as the former AG, she is "bound by solicitor-client privilege in this matter," and has not confirmed or denied reports she was pressured.

In her letter of resignation as Veterans Affairs Minister Wilson-Raybould said she has retained former Supreme Court judge Thomas Cromwell to provide advice on speaking publicly about the scandal.

Trudeau has faced calls to waive solicitor-client privilege and allow those believed to be central to this case -- including Butts -- testify before the House Justice Committee. That committee is meeting in Ottawa on Tuesday to discuss other possible witnesses, the timeline for the meetings, and the potential impact on ongoing court proceedings of this probe after last week’s meeting saw the Liberal majority vote to limit the scope and witness list in a way that the opposition has characterized as a "cover-up." 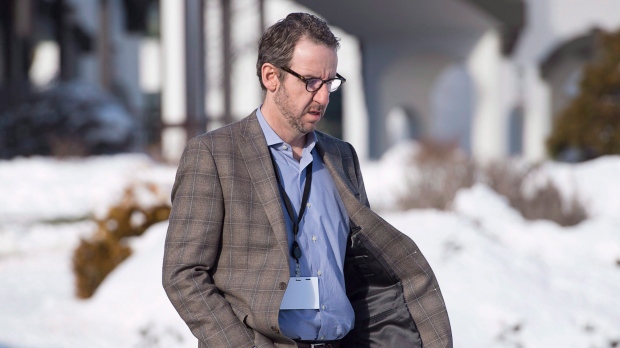 "This is a shocking admission of potential wrongdoing in this case, in the SNC Lavalin case. The timing of this resignation given the scandal is very telling and we need to get to the bottom of this," Singh told CTV News.

The NDP plan on tabling a motion in the House of Commons proposing an independent inquiry led by a former judge. It is expected MPs will vote on the proposal on Wednesday, though even if Liberal MPs side with the opposition in supporting the motion it does not compel the government to act.

Ethics commissioner Mario Dion has launched an investigation into the case because he has "reason to believe that a possible contravention" of the Conflict of Interest Act has occurred, specifically regarding a public office holder seeking to improperly influence a decision of another person.

Conservative Leader Andrew Scheer has said that a number of other options remain on the table for investigating the allegations of interference in the federal justice system, including a Senate study.

In a statement, Scheer said that the "sudden resignation of Justin Trudeau’s closest political advisor is the clearest indication yet that there is much more to the SNC-Lavalin Affair than the prime minister has so far admitted."

"Today we have learned that the brains behind Justin Trudeau, the boss of the PMO Gerald Butts has resigned. This is a massive new development… He would not be leaving the job if this were not extremely serious," said Conservative MP Pierre Poilievre in a video posted to social media. 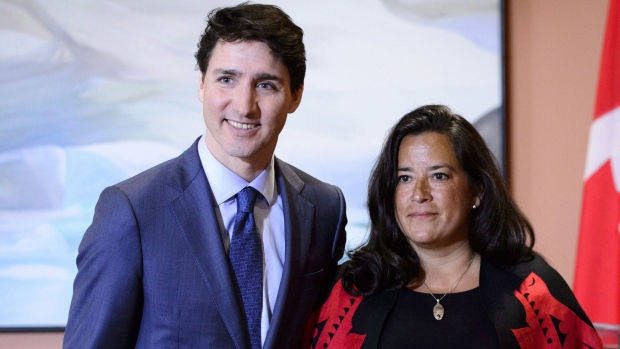 The PMO had told reporters last week that Wilson-Raybould raised the SNC-Lavalin case with Butts in December, and that at that time he had told her to raise it with the clerk of the Privy Council. Trudeau has also said that Wilson-Raybould had asked him in the fall if he planned on telling her what to do in regards to the case, to which he said it was a decision only she could make.

In his resignation statement Butts spoke about his relationship with Wilson-Raybould.

"I encouraged her to run for the Liberal Party of Canada, and worked hard to support her as a candidate and then Cabinet Minister. From my perspective, our relationship has always been defined by mutual respect, candour and an honest desire to work together," Butts' statement said.

Wilson-Raybould was Canada’s first Indigenous justice minister and attorney general. Her shuffling and subsequent resignation has ignited criticism that Trudeau’s team has damaged two of their key tenets: the promise of reconciliation and branding themselves as a feminist government.

Reached by phone, Wilson-Raybould’s father Bill Wilson, who has been outspoken since his daughter’s shuffling, told CTV News that he thought it was quite surprising that someone "as senior as he and as close personally to the prime minister could leave that office. Obviously there's something going on that we don't know yet."

"I don't think he was thrown out but for him to bail out saying ‘I have my reputation to protect’ indicates to me that there's something deeply wrong in that Prime Minister's Office that has yet to be discovered," he said. 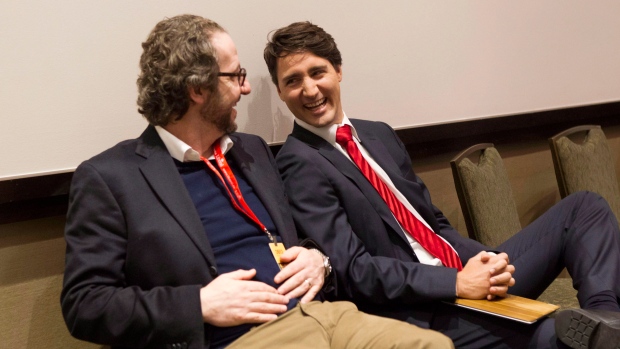 Butts and Trudeau have been friends for many years, and Butts has been in his senior role within the PMO since he helped the Liberals get elected in 2015. Prior to that both he and Trudeau’s chief of staff Katie Telford had careers at Queen's Park.

He is seen in Ottawa as the prime minister’s most trusted adviser, and has been a target for the opposition who have framed him as the real conductor behind the scenes. His tenure in the PMO has not been without controversy. In 2016, both Butts and Telford had to reimburse $64,000 in moving expenses they incurred when they picked up their lives and families and relocated from Toronto to Ottawa to run Trudeau’s office.

"I have at all times given the Prime Minister free and unfettered advice. I have served the public interest, not the interests of any individual or any narrow private interest of any kind, at any time. Life is full of uncertainties, but I am absolutely certain of that," Butts said.

Trudeau and Butts -- who is from Cape Breton, N.S.-- met at McGill University and remained friends after school. After working for former Ontario Liberal premier Dalton McGuinty, Butts took over the World Wildlife Federation Canada (WWF), a non-profit organization committed to conservation and sustainable development. It was from there that he joined the Liberal team in an effort to see his friend win the Liberal leadership in 2013, and has been credited -- alongside Telford -- with being instrumental in Trudeau’s ascension to prime minister from third-party status.

In a tweet sharing his full statement, Butts said that “public institutions are bigger and more important than any of their temporary occupants.”

In response to the sudden resignation, Trudeau tweeted: "Gerald Butts served this government - and our country - with integrity, sage advice and devotion. I want to thank him for his service and continued friendship." 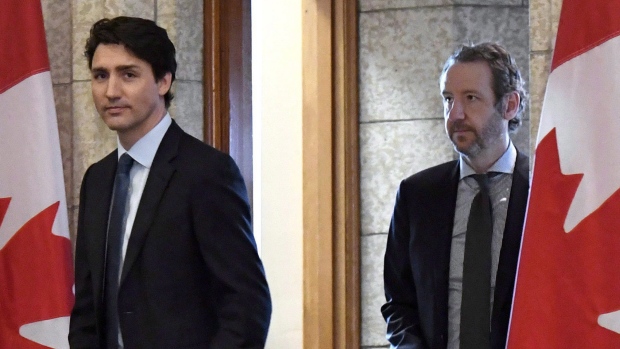 On CTV's Power Play, senior vice president at Proof Strategies and former Liberal staffer Greg MacEachern said the reason he thinks Butts quit was "he realized he was turning into a lightning rod, almost like the way Nancy Pelosi is for the Republicans in the U.S. You have Conservatives here in Canada fundraising mentioning Gerry Butts' name."

He also said that among Liberal backbenchers and the roster of parliamentary secretaries there has been a certain level of discontent with the way they were being treated by the centre of power on Parliament Hill: the office where Butts and Telford have desks.

Summa Strategies Vice President and former Conservative staffer Kate Harrison agreed that Butts has been a major part of Trudeau's mandate, but that's why his departure is "so critical."

"What Gerry Butts is attempting to do is take the bullet without necessarily taking the blame," she said, adding that his resignation doesn't answer any of the outstanding questions circling this affair.

Strategic communications consultant and principal at Earnscliffe Greg Weston said that nothing about his resignation makes sense, unless Wilson-Raybould is to come out in the coming days or weeks and say that it was Butts who allegedly pressured her.

"This is the real bombshell that is sitting out there," Weston said.