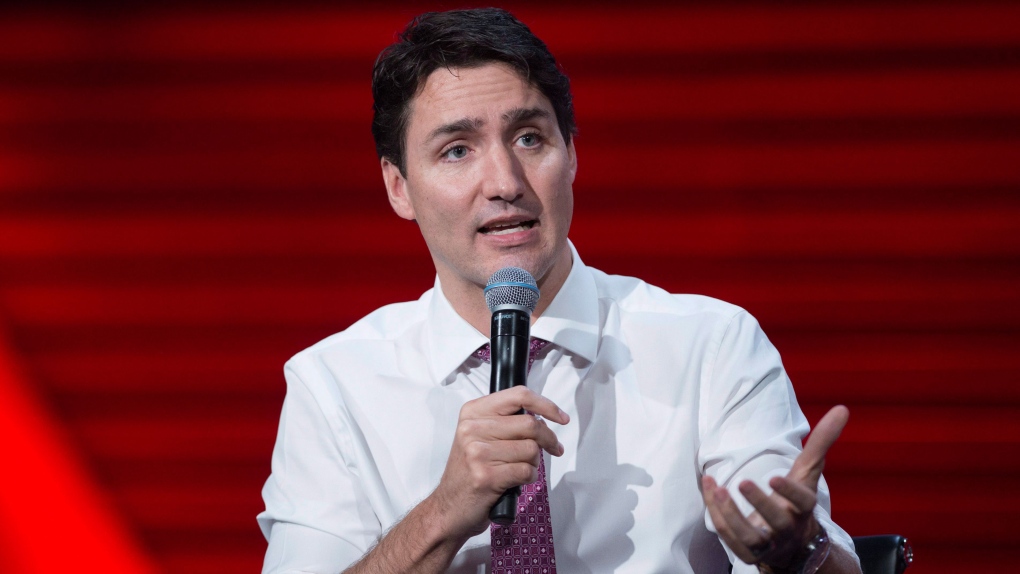 Prime Minister Justin Trudeau participates in an armchair discussion with Tina Brown (not shown) at the Women in the World Summit at the David H. Koch Theater of the Lincoln Center for the Performing Arts in New York on Thursday, April 6, 2017. (Sean Kilpatrick / THE CANADIAN PRESS)

Trudeau is the first sitting head of government or state to be invited to address the summit, his office said.

"The prime minister's participation in the summit is an important opportunity to encourage innovation, promote investment in the technology sector, and draw global talent to Canada," said press secretary Andree-Lyne Halle in a statement.

The summit, under the theme "The CEO Agenda: Navigating Change," brought more than 140 executives to Microsoft's sprawling headquarters in Redmond, just outside Seattle. The annual gathering is closed to the public and the conference centre was surrounded by security guards, black vehicles and armed police officers.

A handful of Microsoft employees gathered outside to sneak a peek at Trudeau, including Twisha, a 31-year-old trade manager who is originally from India and does not have a surname.

"I love him. He's really cute," she said with a laugh.

"He's amazing, he's liberal, he's modern, he's a feminist. I guess he ticks all the right boxes for me."

Dave Ebb, a Winnipeg-born Microsoft employee, said while he was passing by the building that he was excited the prime minister was visiting. He said it would be great for Canada to have more investment in its technology sector.

"I love being Canadian, but the stuff we're working on here is so cool," he said.

Microsoft declined to make a representative available for an interview. Trudeau has no media availability other than a photo opportunity prior to a meeting with Washington Gov. Jay Inslee on Thursday.

Werner Antweiler, an associate professor at the University of British Columbia's Sauder School of Business, said the prime minister's main goal at the summit should be to "put Canada on the map."

Trudeau needs to promote Canada's standard of living and ease of immigration, qualities that make the country an attractive place for global talent as well as investment, Antweiler said.

After Trump signed an executive order barring citizens from seven majority-Muslim countries in January, dozens of Canada's technology CEOs signed a letter asking the federal government to offer immediate entry visas to those affected. The American order was struck down by the courts and a second, similar order is now being challenged.

"Trump says 'America First' but then he's putting America last when it comes to attracting talent from abroad," said Antweiler.

"A lot of people from Europe, from Asia, from the Middle East, are going to look at the United States and say, 'Well, wait a minute, am I feeling comfortable moving there when there is a government that is quite hostile to certain types of immigration?' "

Paul Preston, director of science, technology and innovation policy at the Conference Board of Canada, said in order to attract more global investment, Canada must give incentives to its businesses to spend more on research and development.

"Compared to other developed nations, we spend a lot less," he said. "The more we can continue to attract investment from other places around the world and encourage our businesses to spend on R&D, then we'll start to push the envelope and create more globally competitive ideas and companies."

Namir Anani, CEO of the Information and Communications Technology Council, said attracting international companies to Canada not only creates jobs but creates the ecosystem for future entrepreneurs to connect with local markets.

For example, General Motors added 1,000 jobs in Oshawa to create autonomous cars, allowing an entrepreneur developing an innovative battery system the opportunity to pitch to GM and access international markets, he said.

Benjamin Bergen, executive director of the Council of Canadian Innovators, said his industry group's focus was making sure that domestic companies can scale up and grow in Canada.

"If foreign investment dollars are flowing, let's make sure that our domestic firms are still able to hire talent here in Canada as well and be able to compete with multinationals."