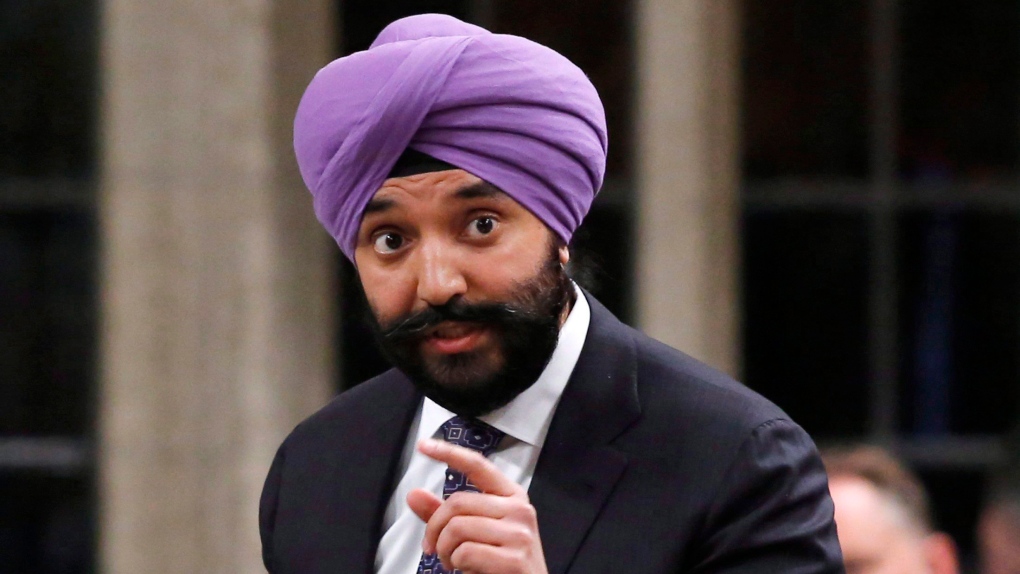 Minister of Innovation, Science and Economic Development, Navdeep Bains, answers a question during Question Period in the House of Commons in Ottawa, March 9, 2017. (Patrick Doyle / The Canadian Press)

Following last week's federal budget, Economic Development Minister Navdeep Bains feels he has even more to offer top-notch workers, scientists and scholars who might consider a move from the United States across the northern frontier.

Bains, who says attracting talent is always part of his mission whenever he travels abroad, will visit Michigan this week to meet state representatives.

Ottawa has been promoting Canada as a destination for specialized talent, including anxious researchers concerned about the political uncertainty that has emerged since the Brexit vote and the U.S. election.

In the U.S., for example, President Donald Trump's budget earlier this month called for billions in cuts to climate-change and medical research.

Bains will keep pushing hard to round up talented minds, even from Canada's neighbour, particularly people who can help this country develop high-tech, big-potential sectors.

"We've been aggressive and we'll continue to be aggressive."

The Trudeau government believes scaling up innovative companies is a key driver of future economic growth.

It announced the creation of around 25 university research chairs. Ottawa will dedicate $117.6 million over eight years towards these new positions, using money from the existing federal research-chair program.

The government also committed $125 million to launch a new artificial intelligence strategy with a goal of recruiting and retaining top academic talent. It aims to leverage Canada's already-significant expertise in AI to make it a world leader in a field dripping with economic potential.

The budget also contained commitments in areas such as stem-cell research, space exploration and quantum computing.

Bains, however, believes the biggest impact on innovation from the budget could come from the feds' previously announced "global skills strategy."

The program, set for launch in June, will accelerate the entry of skilled workers into Canada and give high-growth firms faster access to in-demand talent. Its goal is to reduce wait times for visas and work-permit applications from months to just two weeks.

"In terms of the target, we want to be as open and as flexible as possible at this stage. If the demand is high, we want to accommodate that demand because we really believe that's at the core of our economic agenda."

Canada is all too familiar with brain drains.

In recent years, regions like Silicon Valley have been luring away some of Canada's brightest.

Asked whether he had concerns that trying to pluck brains from the U.S. might anger the Trump administration, Bains said: "No, this is part of our economic plan."

"We want to grow the economy and we will not hesitate to do that."

The president of the Canadian Institute for Advanced Research, which will be responsible for overseeing the $125-million AI strategy, said the timing couldn't be better for Canada to attract world experts.

"We all know what's going on in other countries these days," said Alan Bernstein, whose institute is credited with starting the powerful form of AI known as deep learning, or deep AI.

Bernstein said deep AI, or variations thereof, is central for rapidly expanding areas such as smart cars and advanced manufacturing.

"We don't want to poach other countries, but if there are bright people who are looking for somewhere to go and they're talented ... let's try to get them here," he said.

As Canada makes efforts to become an AI leader, signals from the U.S. administration suggest it may not be in so much of a rush.

Last week, U.S. Treasury Secretary Steve Mnuchin was asked by the Axios media outlet about AI supplanting human jobs in the near future.

But in its drive for more innovation, Ottawa has faced pressure to ensure any new commitment is money well spent.

A recent study released before the budget showed the feds were spending about $22.6 billion on innovation and skills development. The investments came through 147 programs and tax expenditures, said the study by University of Ottawa's Institute of Fiscal Studies and Democracy.

The budget promised a whole-of-government review of business innovation programs to ensure they're truly helping innovators.

Bains agrees that Ottawa must do a better job evaluating the current programs to determine if they're successful in generating outcomes like boosting revenue, creating quality jobs and bringing good ideas to the marketplace in a timely manner.