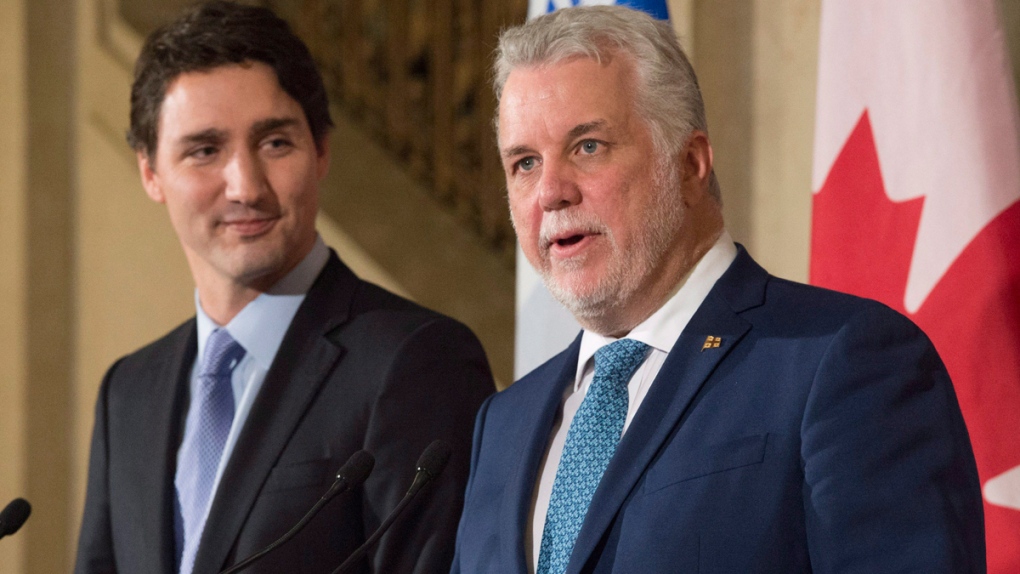 QUEBEC -- Prime Minister Justin Trudeau praised Quebec's approach to assisted dying on Friday as he and Premier Philippe Couillard hailed a new era of co-operation between Ottawa and the province.

While the two leaders broached a slew of topics in a lengthy meeting, it was the thorny issue of dying in dignity that dominated a news conference that followed.

"I have always congratulated Quebecers and the national assembly for its responsible and rigorous approach to such a delicate and sensitive topic for so many people," Trudeau said.

"In our submission to the Supreme Court for a six-month extension beyond Feb. 6, we are very open (to the idea) that the (court) consider the fact that Quebec has already established the kind of framework it asked the federal government and the provinces to establish.

"Quebec has shown exactly what the Supreme Court wanted to see."

The high court struck down the prohibition on doctor-assisted dying last February and gave the federal government a year to come up with a new law recognizing the right of clearly consenting adults who are enduring intolerable physical or mental suffering to seek medical help in ending their lives.

Trudeau's Liberal government is seeking a six-month extension on the court's deadline which, if granted, would give it until August to come up with a new law.

Quebec's own law on medically assisted dying went into effect Thursday and will remain so at least until Dec. 18, when the Quebec Court of Appeal is to hear arguments on a lower court ruling which suspended some key aspects of the law.

The body that oversees Crown prosecutors in Quebec announced Thursday it will not file charges against any medical personnel who help people die so long as evidence shows the patient was "not in a situation of vulnerability." The stance came a day after provincial Justice Minister Stephanie Vallee issued guidelines to prosecutors.

Trudeau was asked Friday whether he believes a Quebec doctor who now helps someone die is violating the Criminal Code.

"It's certainly important we have a Criminal Code that applies across the country," he replied.

"But we know very well that on many issues, be it the legal age for buying alcohol or sentences for young offenders, there are various solutions propsed by the provinces that don't violate the Criminal Code."

Couillard also defended the law and said that if a doctor does not want to help somone die, he needs to refer the case to a colleague.

"The law was well prepared," the premier said.

Their other topics of discussion included the economy, infrastructure, federal transfers, climate change, financial aid to Bombardier Inc. and Quebec's place in Canada.

Couillard said both men agreed a lot of work needs to be done on the environment as Trudeau is expected to convene premiers to conference on the matter in 90 days.

"Over and above that, there are a lot of things we can do right now by choosing the right priorities now when we invest in infrastructures, to have a significant impact on our (greenhouse gas) emissions," Couillard said.

"If we choose to invest wisely in public transit, electrification of transport, biofuels, other types of initiatives that will by themselves lower the emissions, it's a very significant gesture."

As for Quebec's place in Canada, Trudeau said it's important but that he and Couillard have always agreed that their priorities lie elsewhere such as economic development and climate change.

"But as I've always said, I'm open to discussing various topics such as ways of getting Quebec and Quebecers more involved in the future of Canada," he said, adding there is no timetable for any talks aimed at getting Quebec to sign the Constitution.

Regardless, both men agreed the election of their respective Liberal governments will result in a different dynamic between the two jurisdictions.

"We are really entering a new era of co-operation between Ottawa and Quebec," Trudeau said.