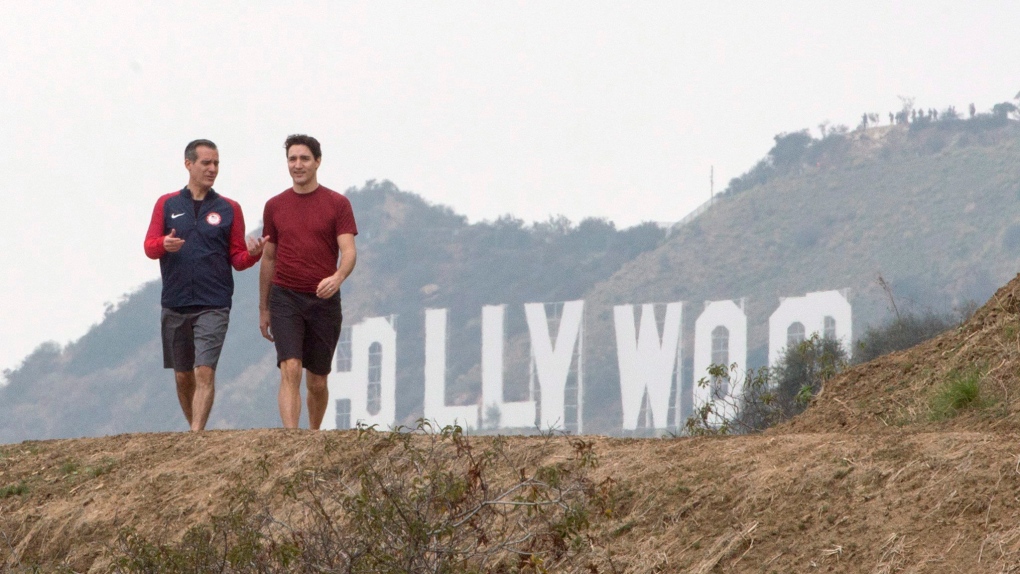 Dressed in shorts and athletic shirts, the two men spoke with reporters before walking through Griffith Park. The appearance came the morning after Trudeau gave a speech about the importance of the North American Free Trade Agreement at the Ronald Reagan Presidential Library in Simi Valley.

A California Highway Patrol officer accompanying the prime minister was injured in a crash that happened shortly after Trudeau's motorcade left the library Friday night. Garcetti said Saturday that the officer is expected to recover from a broken clavicle.

Asked by a reporter if the officer's injury was overshadowing the purpose of his trip, Trudeau said the message that the two countries share close ties has not been lost.

"That emphasis that we are working together for the betterment of our citizens is a message that does continue and does resonate," he said.

The two men made statements in English, French and Spanish.

Garcetti warmly welcomed Trudeau to Los Angeles and said that Canada was a major trading partner for the city.

"It's very important for us in this moment, when there is so much supposed division in the world to reinsure that there is friendship and strength," Garcetti said. "We see friendship as a strength and conflict as a weakness."

The two men, both in their 40s, then set off at a brisk pace. They chatted with other hikers and posed for a "selfie" with one group.

Trudeau said the hike was "awesome" and "beautiful."

Trudeau came with an unambiguous message that NAFTA is a success that needs to be modernized and not abandoned. The next round of talks over the trade pact is set to begin in Mexico later this month

President Donald Trump called the 24-year-old agreement a job-killing "disaster" on the campaign trail, and he has threatened to pull out unless the deal requires more auto production in the U.S., while shifting additional government contracts to U.S. companies.

Trudeau argued that the deal has sent benefits both ways across the border.

But he added: "President Trump and I agree about this: Too many people have been left behind, even as our economies surged."

Trudeau was in San Francisco Thursday, where he picked up promises of investments and jobs during his first official visit to the city. Among them, Salesforce CEO Marc Benioff announced the online business software company will invest another $2 billion in its Canadian operations.

Friday's speech was a centerpiece on his swing in which he warned Canada won't be muscled into a trade deal that is unfavourable to his country, while promoting the country as a destination for California technology firms uneasy with shifting U.S. immigration policy.