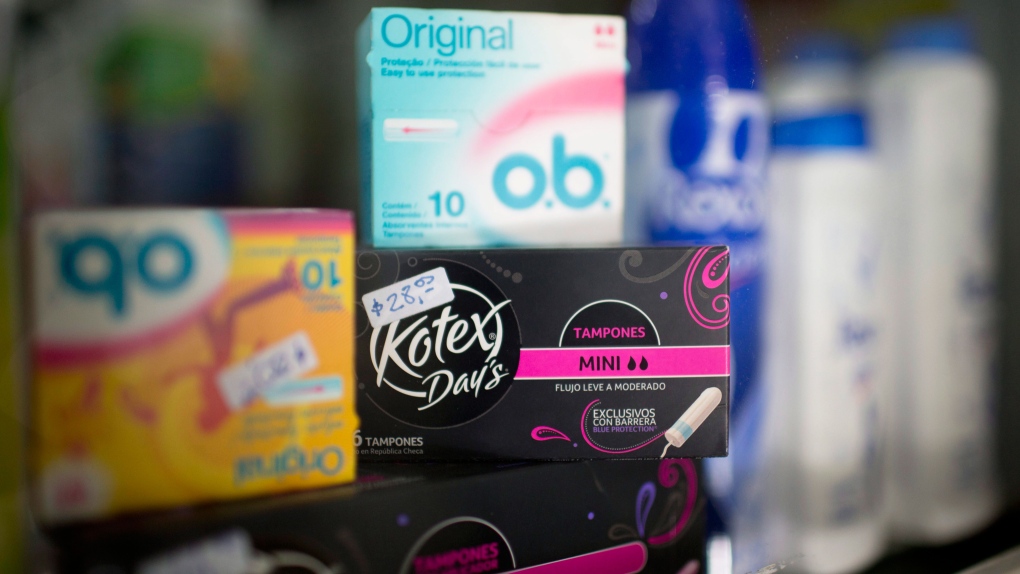 Tampons are displayed on a shelf at a drug store in Buenos Aires, Argentina, Wednesday, Jan. 7, 2015. (AP / Natacha Pisarenko)

OTTAWA -- The federal New Democrats pressed the Conservatives on Tuesday for a definite commitment to eliminate the federal tax on feminine hygiene products after all parties voted in favour of a motion to do so.

Support from the Tories came after female Conservative MPs told their caucus that if they didn't support the motion, the women wouldn't show up for Monday night's vote, The Canadian Press has learned.

But it's unclear if that show of force will extend to the New Democrats latest demand -- that the budget implementation bill currently before the House of Commons be amended so the tax can be removed immediately.

"Everyone in this House agrees that this $36 million tax grab on women is unfair," NDP MP Irene Mathyssen said Tuesday.

"I'm very grateful there is unanimous agreement that we need change, now the Conservatives need to put that commitment into action."

The New Democrats have been trying since 2004 to get a bill passed to exempt feminine hygiene products from the federal goods and services tax.

The problem with the tax, opponents argue, is that it's discriminatory -- only women pay it for a product they can't live without. At the same time, things such as wedding cakes or Viagra evade the levy.

MPs said the Conservatives had considered doing something about it in the past and the issue gained new traction during pre-budget consultations thanks to an online petition campaign launched in January.

But the campaign gained momentum and national attention at the same time the government was in the midst of a frantic rewrite of the federal budget to account for the drop in oil revenues.

Dropping the tax meant finding $36 million a year somewhere else at a time when the government was pledged to balance the budget even as revenues fell.

Supporters in the Tory caucus were told to wait.

With the issue in the spotlight, the New Democrats decided to devote one of their opposition days in the Commons to force a debate, rather than wait for their private members' bill to come up for a vote.

Behind caucus doors, Conservative women declared there was no way they could vote against ending the tax and it was time to force the issue.

It didn't hurt that motion only said the tax should be repealed and didn't hold the government to a deadline.

Thus far, the Conservatives have said only that they'll address the tax in a future budget.

But getting caucus on board also required a little education, several female MPs said, speaking on the condition of anonymity as they aren't generally allowed to discuss what happens in caucus meetings.

They said many male colleagues had never contemplated the issue posed by a tax on items only women use and just didn't see it as something that needed to be dealt with.

It took leadership by women and even some men in caucus to get everyone behind the vote, Kellie Leitch, minister for the status of women, said in an interview.

"What I find with my caucus mates, when you lay out the facts, people judge things on the facts," she said.

"And that's exactly what happened."