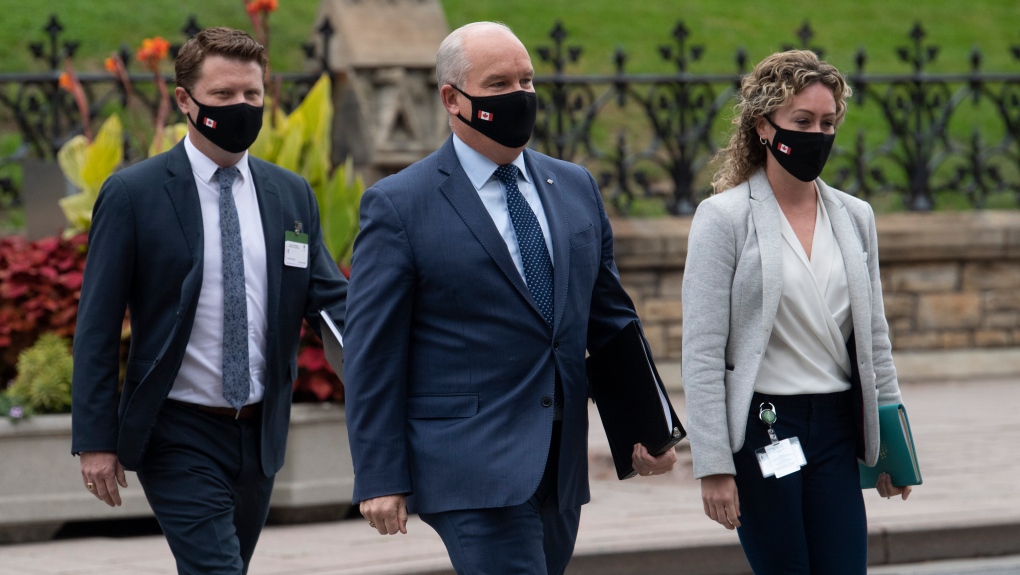 OTTAWA -- Conservative Leader Erin O'Toole says he's urging his MPs to be hypervigilant amid concerns they could bring COVID-19 from Ottawa back to their ridings.

But he won't stop them from using the same private testing clinic he did after he was turned away from a public facility in Ottawa that was over capacity.

"Well, what I'm actually going to do is try and get (Prime Minister Justin) Trudeau off his duff to get some tests so that people can do in their home like they can in most G7 countries," O'Toole said in a telephone interview with The Canadian Press.

O'Toole is nearing his final days in isolation after testing positive for COVID-19 last week.

He first sought testing at a public site last Wednesday, but after several hours in line, was turned away.

A call to the public health office for MPs directed him to a clinic and he went the next day without realizing it was a fully private establishment set up for MPs, he said.

He had thought he was going directly to the same kind of private laboratory used for medical testing by many Canadians.

"So should there be a special clinic where people get superior access? No," he said.

"We were just looking for an option to to get it done quickly. And I had no idea that it was a private clinic."

The nation's capital is seeing a surge in cases just as Parliament is resuming semi-normal operations for the first time in months.

Dozens of MPs are back on the Hill, many coming to and from ridings where there is little sign of the novel coronavirus circulating.

While all parties agreed to a hybrid approach that allows MPs to attend the House of Commons in person or log-in remotely, the Tories have been steadfast in maintaining that in-person sittings are crucial.

O'Toole said his own experience with the virus hasn't changed his point of view. If schools can run, so can Parliament, he said.

But he said how he came down with COVID-19 ought to serve as a warning: even social bubbles can burst.

He is believed to have contracted the virus from a staffer who was in his immediate circle. As MPs come and go, he said, they can't be sure of where their own staff have been.

"Hypervigilance needs to be the rule of the day," he said.

"And that means not taking your mask off when you're in your office with your staff. It means constant vigilance, so that we can we can do the democratic role we have responsibility (to perform)."

While O'Toole and his wife both have the virus, so far their two children are negative, though he said they do need to be retested given Rebecca's more recent diagnosis. He said it wouldn't surprise him if the kids do test positive, given they had more contact with Rebecca before she fell ill.

O'Toole joked that while it means his son, Jack, gets what he wants -- not having to go to school -- the reality of hours-long line-ups and the fact kids are being pulled out of school carries huge risks.

"The worry is people see those lines and, if they're in precarious employment, they'll just go back to work," he said.

"And we could actually be causing more community spread because the testing is so poorly run."

He said taking the government to task for its response on testing will be part of his response to the speech from the throne next week once he comes out of quarantine.

Much of the sacrifice of the last several months was made in the name of getting the country ready for the second wave, he said.

"I think a lot of families right now are wondering, after all we went through, we're not ready for testing of the second wave?" he said.

This report by The Canadian Press was first published September 25, 2020.