OTTAWA -- The Harper government says it supports a House of Commons motion calling for the removal of the federal tax on tampons.

It says the measure will be addressed in a future budget.

Proud to announce that our Gov't will support the motion to remove the GST from feminine hygiene products. #cdnpoli #notaxontampons

There have been several attempts since 2004 to pass a private member's bill on the subject, including one currently in the queue sponsored by NDP MP Irene Mathyssen.

But since January, over 72,000 people have signed an online petition calling for an end to the levy on menstrual products, saying it's a tax that unfairly targets women.

The momentum prompted the New Democrats to try and get a motion passed before the House as well and they are using one of their few opposition days for the debate.

The vote won't take place until next week. But Susan Truppe, the government's parliamentary secretary for the status of women, suggested Friday the motion will pass.

"The government does support this motion and will consider this proposal in future budgets," she said during question period.

New Democrat Niki Ashton urged action now, not in a budget yet to come.

"That kind of support is not good enough," Ashton said during the Friday debate.

Several NDP MPs also rose in the Commons Thursday to present formal petitions requesting an end to the tax; removing it has been estimated to cost the government $36 million.

Tabling a petition in the House means the government must issue a formal response within 45 calendar days. 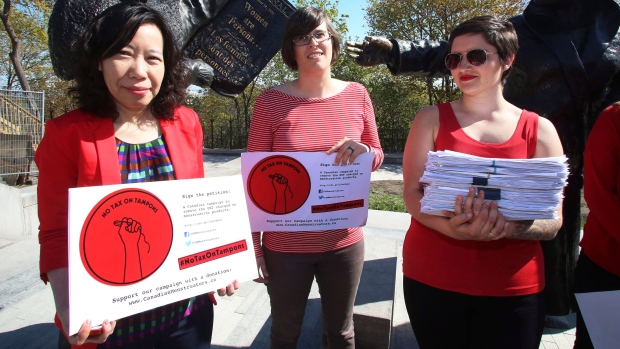 Lele Truong, Lareen Jervis and Mariana Hollmann (left to right) take part in a news conference and petition on Parliament Hill in Ottawa Thursday, May 7, 2015 calling on the federal government to remove tax on feminine hygiene products. (Fred Chartrand / THE CANADIAN PRESS)

Supporters of the plan argue that it makes no sense for menstrual products to be subject to a tax, noting they are essential goods, not luxury items.

There's no sales tax charged on cocktail cherries, wedding cakes, incontinence products or Viagra, they note, but all Canadian women must pay tax on a product they use every single month for close to 40 years.

"This is an non-optional tax that's borne by only half the population," said Kathleen Fraser, one of the women behind the online petition.

"It's a tax based on biological characteristics and though it may seem like small change, it's a tax that places an unfair burden on women, trans people and other menstruators."