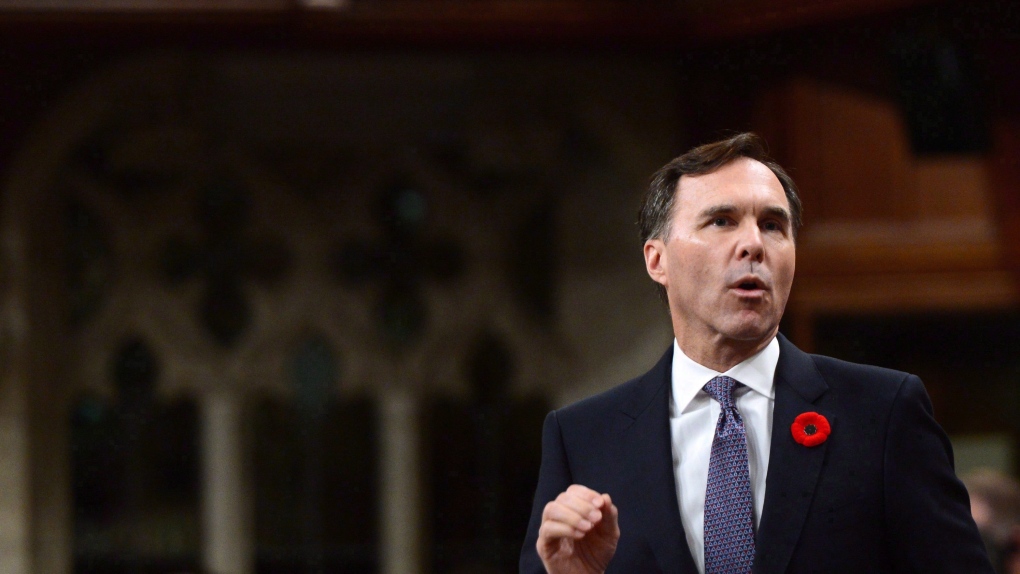 Minister of Finance Bill Morneau stands during question period in the House of Commons on Parliament Hill in Ottawa on Thursday, Nov. 2, 2017. (Sean Kilpatrick / THE CANADIAN PRESS)

OTTAWA -- The Conservatives have opened up yet another new line of attack against Bill Morneau, accusing the embattled finance minister of selling off stock the week before his own policy announcement drove the value of the shares down by half a million dollars.

Inside the House of Commons on Monday, Tory MPs peppered Morneau with questions about the timing of the sale of $10 million worth of shares in his family-founded human resources firm, Morneau Shepell.

Poilievre fired more than a dozen queries at Morneau on the subject during question period. He asked Morneau to confirm he was the 'someone' responsible for selling off about 680,000 shares in the company about a week before the tax-change announcement.

"That 'someone' would have saved a half a million dollars by avoiding the drop in the stock market that followed his introduction of tax measures in this House of Commons," Poilievre said.

"Was it just a coincidence that those two transactions line up so carefully? Or in fact did the minister jump the gun and sell his shares before he introduced his tax measures?"

Morneau largely avoided the queries, insisting simply that he had absolutely nothing to hide.

Daniel Lauzon, a spokesman for Morneau, later called Poilievre's insinuations "utterly false" and "absurd" -- and challenged the Tories to make the accusations outside the House of Commons, where members are not protected by parliamentary privilege.

Following question period and outside the House, where he was asked directly about his line of questioning and whether he believed the law had been broken, Poilievre demurred.

"We really have to know the details first -- I don't want to speculate," he said.

"We know that ministers have the ability to introduce tax changes on the floor of the House of Commons that could potentially affect stock prices and we think it is important that everybody have that information before that minister acts on it."

Morneau has been at the centre of an ethics controversy for weeks.

The ethics commissioner has launched a formal examination to determine if he was in a conflict of interest related to his work to introduce pension-reform legislation, which critics have insisted would benefit Morneau Shepell -- a company in which, until recently, Morneau owned about $21 million worth of shares.

Morneau was executive chairman of Morneau Shepell, which he helped build with his father, until shortly after the 2015 election and before he was named finance minister a couple of weeks later.

After the ethics controversy erupted, he sold off the remainder of his holdings in Morneau Shepell and vowed to place his other substantial assets in a blind trust.

Morneau donated the difference between what the shares were worth at the time of the sale and their value in 2015 when he was first elected -- an amount estimated at about $5 million.

He has also faced intense criticism about his integrity after information surfaced showing that, based on the ethics commissioner's advice, he did not divest shares or place his holdings in a blind trust after being was named to cabinet.

New Democrat ethics critic Nathan Cullen said Morneau failed to clear the air Monday over the 2015 sale of his shares, even though he was given many opportunities to do so.

"This is the problem that Mr. Morneau creates for himself continuously -- by having made decision after decision that does not fall into even the ballpark of common sense and puts him in a constant threat of conflict of interest," Cullen said.