Timeline of the election chatter of the social network

Facebook has released new data that shows exactly when discussions about particular party leaders have spiked during the election campaign.

Although the social network’s data did not reveal the topic of the discussions, a look at campaign milestones and policy announcements gives a hint as to why certain leaders generated attention on Facebook at different times.

The social network measured the number of unique people who have discussed Canadian political leaders, parties and platform issues on Facebook in the last three months. Facebook also tabulated the overall volume of discussion. 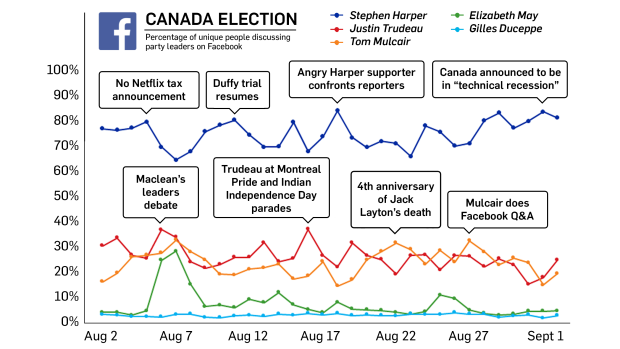 Data shows the most discussed federal party leader was Conservative Leader Stephen Harper. Discussions connected to Harper spiked on Aug. 18, the day a Conservative supporter confronted the media about asking questions in connection with the Mike Duffy scandal.

A Statistics Canada release on Sept. 1 showing that Canada is in a technical recession coincided with Harper’s second-most discussed day on Facebook during the election campaign.

Another discussion peak for Harper was on Aug. 5 when he vowed to never tax Netflix or online streaming services.

Discussions about Liberal Leader Justin Trudeau spiked on Aug. 16. On that day, he attended Montreal’s Pride parade and a parade to commemorate India’s independence.

Trudeau’s next most popular day on Facebook was on Aug. 6, the day of the leaders’ debate.

Discussions surrounding NDP Leader Tom Mulcair peaked on Aug. 7, the day after the debate. Mulcair also generated a significant amount of chatter on Aug. 27 when he conducted a Facebook Q&A.

Conversations about other leaders, such as the Green Party’s Elizabeth May and the Bloc’s Gilles Duceppe have remained relatively steady.

The only exception was on Aug. 7, the day after the debate, when discussions surrounding the Green leader spiked.