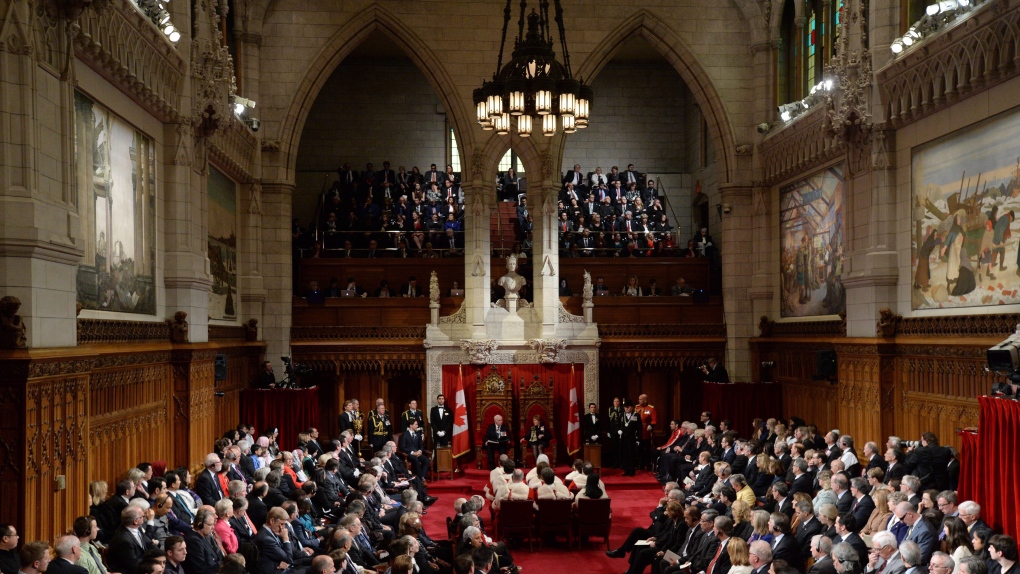 Governor General David Johnston delivers the speech from the throne in the Senate Chamber on Parliament Hill in Ottawa, Friday December 4, 2015. (THE CANADIAN PRESS/Sean Kilpatrick)

OTTAWA -- Justin Trudeau's Liberal government set out to make good on its campaign promise to reset the relationship with Canada's Aboriginal Peoples in a throne speech Friday that emphasized the need for reconciliation.

The newly elected government's first speech from the throne, delivered in the Senate chamber by Gov. Gen. David Johnston, heralded the start of a new partnership with First Nations, Metis and Inuit people.

"Because it is both the right thing to do and a certain path to economic growth, the government will undertake to renew, nation-to-nation, the relationship between Canada and indigenous peoples -- one based on recognition of rights, respect, co-operation and partnership," Johnston said.

The government will work jointly to implement all 94 recommendations of the Truth and Reconciliation Commission, which explored the dark legacy of Canada's now-defunct residential school system.

Johnston mentioned one of those recommendations specifically: launching a long-awaited public inquiry into the phenomenon of missing and murdered aboriginal women.

Johnston also said the government would take steps towards ensuring every aboriginal child in Canada receives a quality education.

The federal Liberals have long insisted they intend to strike a different tone with indigenous people -- a deliberate attempt to dial back on the tension that existed with the former Conservative government.

In January 2013, the relationship reached a tipping point when the Idle No More movement was at its pinnacle.

The movement garnered international attention as aboriginal people across Canada protested everything from missing and murdered women to the gutting of environmental protections in the Navigable Waters Protection Act.

Interim Conservative leader Rona Ambrose seemed to take a much different approach Friday as she praised the Liberals for their approach to the file.

"I think there's a lot of positive things that the government's talking about when it comes to First Nations," Ambrose said. "We will be there to support those positive initiatives."

As part of the new government's commitment, Prime Minister Justin Trudeau is scheduled to speak at special chiefs assembly in Ottawa next Tuesday hosted by the Assembly of First Nations.

The government is also moving ahead with the first steps to set out the mandate for the missing and murdered inquiry. Pre-inquiry consultations will be announced in the near future, said Indigenous Affairs Minister Carolyn Bennett.

"We hope we will find that balance of the urgency of the inquiry, but also the importance of getting it right," she said.

There have also been other signals that the Liberals intend to come at aboriginal affairs from a different direction than their predecessors.

On Thursday, Democratic Institutions Minister Maryam Monsef kicked off a news conference "by acknowledging our presence on the traditional territory of the Algonquin peoples."

It's a symbolic gesture that's part of the effort to signal a new relationship, Bennett noted.

"There are many voices suggesting that acknowledgment ... that recognition of rights and acknowledgment of the people who were here first is very much part of rebuilding the relationship," she said.

"We have to be in the business of reconciliation, and that means starting with the recognition of the truth."

Isadore Day, the Ontario regional chief of the Assembly of First Nations, said the government's language indicates the prime minister will make good on his promise to recognize a nation-to-nation relationship.

"It is very significant," Day said.

Charlie Angus, the NDP critic on aboriginal affairs, said he was pleased to see positive signs of reconciliation in the speech after the "confrontational, mean-spirited approach" from the Conservatives.

He still has big questions for the government, however.

"There are some gaps -- and some questionable gaps," Angus said. "For example, they made a promise to end the boil-water advisories on reserves in five years, they've talked about the infrastructure crisis on reserves....

"Reconciliation doesn't happen with just big words. It happens on the ground in communities."