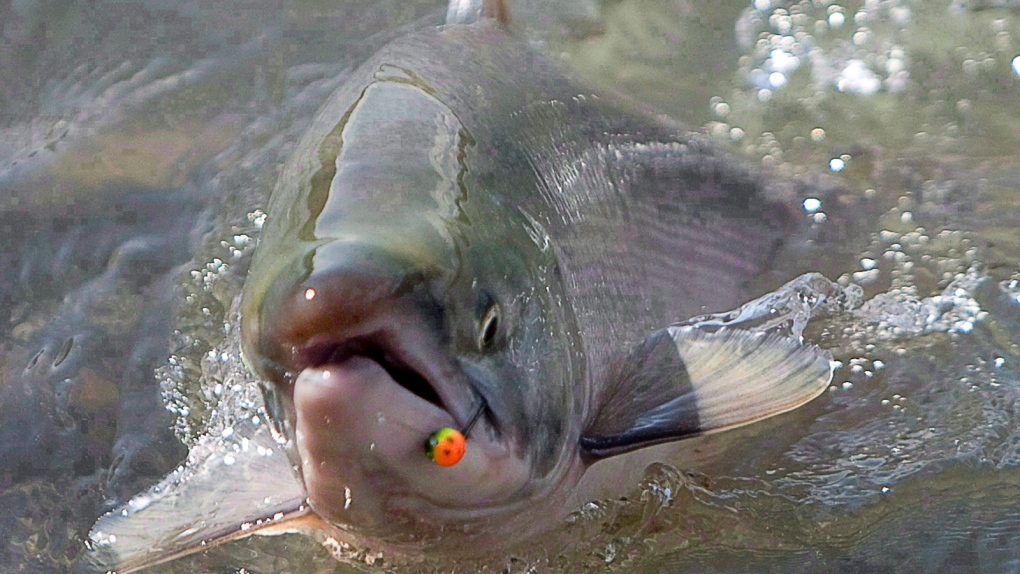 A sockeye salmon is reeled in by a fisherman along the shores of the Fraser River near Chilliwack, B.C., Wednesday, Sept. 1, 2010. (Jonathan Hayward / THE CANADIAN PRESS)

VANCOUVER -- The federal government says it has implemented most recommendations from a 2012 report aimed at revitalizing British Columbia's Fraser River sockeye salmon run but the outlook for the species remains murky.

The Cohen commission was launched by the federal government after the near disappearance of the sockeye salmon run in the Fraser River system in 2009. Former B.C. Supreme Court judge Bruce Cohen made 75 suggestions for change, and Fisheries and Oceans Canada said Thursday it has acted on 64 of the recommendations.

Despite these efforts, officials say only 1.5 million salmon have returned to the Fraser River this year, well below the 4.4 million forecasted.

Jennifer Nener, director of the department's salmon management, said warmer temperatures in the Pacific Ocean may be largely to blame for poor salmon returns this year.

"We had very warm ocean conditions several degrees above average for a couple of years and that affected the whole food chain for salmon and everything else out there as well," she said. "What we suspect is that salmon have been affected by the availability of food when they get out into the ocean environment, so we've seen returns below expectations."

She said the government has been conservative in the number of fish that can be caught in response to the low returns, but only time will tell if the government's efforts will restore stocks in the long term.

"We have really, I would say, implemented more precautionary measures than ever before," she said. "Obviously ocean temps are not something within our realm of control. What we can do is manage to the best of our ability to improve the survival of sockeye overall and other salmon species as well."

Plans to implement a new wild salmon policy are also in the works and officials said consultations with First Nations and the public are expected to take place this fall.