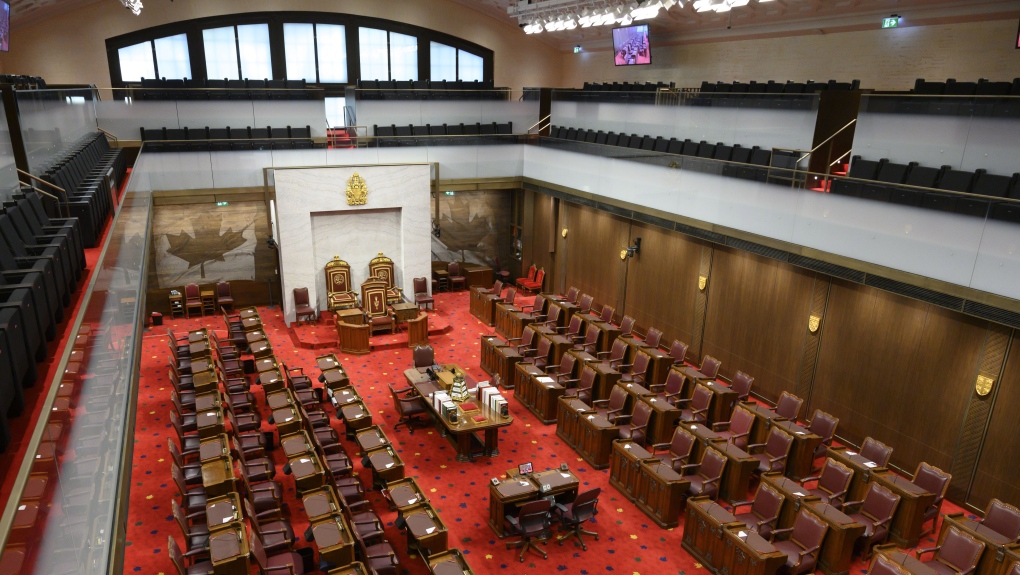 The Senate of Canada building and Senate Chamber are pictured in Ottawa on Monday, Feb. 18, 2019. (CANADIAN PRESS / Sean Kilpatrick)

OTTAWA -- There was a strong message conveyed to cabinet ministers last week as senators grilled them on the Trudeau government's bill to expand access to medical assistance in dying.

We told you so.

Ministers were repeatedly reminded that when the federal government introduced its first bill in 2016 to legalize doctor-assisted death in Canada, senators warned it was unconstitutional and predicted it would be struck down by the courts. A majority of senators voted at that time to drop the central pillar of the bill: that only those whose natural death is reasonably foreseeable should be eligible for an assisted death.

The government rejected the amendment and senators ultimately backed down. But, as they'd predicted, the near-death provision was subsequently struck down in a Quebec Superior Court ruling in September 2019.

Now, some senators are convinced the bill introduced to bring the law into compliance with that ruling is also unconstitutional. And they're pondering how far they should go to protect the rights of Canadians seeking access to medically assisted death.

All legislation must be approved by both houses of Parliament. The Senate can defeat a bill outright, although that has rarely happened.

If the Senate amends a bill, it is sent back to the House of Commons to decide whether to accept or reject the changes. The Senate can dig in its heels and insist on an amendment rejected by the Commons, potentially leading to legislation ping-ponging back and forth between chambers without resolution.

In practice, however, because senators are not elected, they generally acquiesce to the will of the Commons, as they did on the 2016 assisted-dying bill.

But some senators argue that a different standard applies when fundamental constitutional rights are at stake.

"If it's a very clear violation of a constitutional right, I think we have the right, the moral obligation even, to stick to our position and to insist (on amendment)," says Sen. Pierre Dalphond, a former Quebec Appeal Court judge who sits with the Progressive Senate Group.

Dalphond is highly skeptical that the government's latest assisted-dying bill, C-7, is constitutional. He's awaiting further explanations from the government before making a final decision.

Appointed in 2019, Dalphond was not in the Senate when the chamber last debated medical assistance in dying legislation. But some senators who did live through the 2016 debate seem particularly determined not to let history repeat itself.

Conservative Sen. Claude Carignan believes Bill C-7 violates the guarantee of equality rights in the Charter of Rights and Freedoms by specifying that people suffering solely from mental illnesses will not be allowed access to an assisted death.

He thinks the proposed two-track approach to eligibility -- one set of rules for people who are near death and more restrictive rules for those who aren't -- is similarly problematic.

"I think the government has created another bill that will have to come back in two or three years after a court challenge," Carignan says.

He believes the government is determined to proceed cautiously on assisted dying and is quite content to have the courts force its hand every step of the way. The trouble with that approach, in his view, is that it forces vulnerable people who are suffering unbearably from serious illnesses to spend time, money and energy fighting for their rights in court.

"That's really tough. So I think if we want to protect those people we have to insist and say, 'Look, don't go there another time."'

Fellow Conservative Sen. Pierre-Hugues Boisvenu is hopeful the Senate will propose, and the government will agree, to a compromise this time: amend the bill to remove the mental illness exclusion but give the government one or two years to come up with guidelines and safeguards before that part of the law goes into force.

He said that could "be a good compromise" that would avoid a potential standoff between the Senate and the government over the issue.

Dalphond is inclined to support such a compromise because it would force the government to act on the issue, rather than leave it to be discussed, possibly without resolution, during a promised parliamentary review. That review must grapple with other thorny matters, such as whether to allow advance consent for assisted death, as well as access to the procedure for mature minors.

"We have an opportunity maybe to straighten things up now. Why wait another one, two, three years? People will be suffering during that period."

The composition of the Senate has changed considerably over the past four years so it's not yet possible to gauge whether the current crop of senators will go as far as -- or further than -- senators did in 2016 to protect charter rights. There are certainly many senators who are passionately opposed on moral grounds to any expanded access to assisted death, and especially opposed to extending it to people suffering solely from mental illnesses.

But senators with extensive legal backgrounds -- both veterans like Carignan and more recent appointees like Dalphond -- who grilled ministers last week during committee hearings on the bill all questioned its constitutionality.

Lametti did not answer and Cotter concedes it's a question he's wrestling with himself.

"The nice thing about the Senate is, on the one hand, I do think we have to advance our viewpoint on the basis of principle and we have much more luxury to do that in a less partisan Senate," says Cotter, a member of the Independent Senators Group.

"And on constitutionality, it's quite possible that senators need to be firm. But at the same time I don't think we have the right to overreach because we are involved in a role where we are appointed, we are not elected by constituents and we need to be respectful of the electoral process that leads to government according to law."

This report by The Canadian Press was first published Nov. 29, 2020.