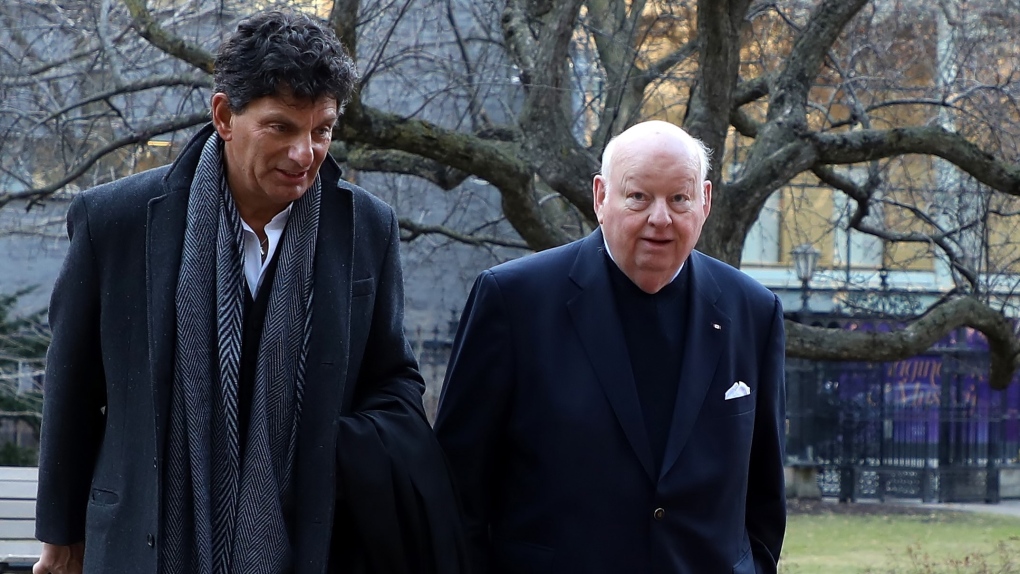 Sen. Mike Duffy arrives with his lawyer Lawrence Greenspon at the Ontario Court of Appeal in Toronto on Thursday, Jan. 16, 2020. THE CANADIAN PRESS/Colin Perkel.

TORONTO -- The Senate forfeited any claim to immunity from lawsuits over its suspension of Mike Duffy, because its actions were politically motivated and unlawful, the senator's lawyer argued on Thursday.

In submissions to the Ontario Court of Appeal, Lawrence Greenspon said the decision in November 2013 to suspend Duffy without pay came at the direction of then-Conservative prime minister Stephen Harper's office.

"It's constitutionally outrageous what happened here," Greenspon said. "Our claim is that parliamentary privilegeΓÇªdoes not extend to unlawful conduct."

The P.E.I. senator was ultimately acquitted in 2016 of 31 criminal charges in a ruling that slammed the conduct of Harper's office in what was one of the biggest political scandals of his government. Despite Duffy's exoneration, the Senate refused to repay the hundreds of thousands of dollars he lost in pay and pension, court heard.

Duffy now wants $7.8 million in reimbursement and damages from the Senate, RCMP and federal government. However, a lower court in December 2018 sided with the Senate that parliamentary privilege made it immune to lawsuits, prompting Duffy's appeal.

Greenspon told the three-judge panel that immunity -- designed to separate parliamentary and executive powers -- should not apply in this case. The Senate's actions against Duffy, he said, were carried out on behalf of what he called misconduct in the Prime Minister's Office.

"The Senate bowed to the directions of the executive from which it was supposed to be independent," Greenspon said. "Unlawful conduct caused the loss. Parliamentary privilegeΓÇªdoes not extend to unlawful conduct."

Among other things, Greenspon said Harper's office threatened Duffy that he'd be kicked out of Senate unless he admitted to inadvertently abusing his expense account and repaid the money, about $90,000. The threats, the lawyer said, amounted to extortion.

If the Senate believes its actions were proper, Greenspon said, it should defend itself in court.

"Let them call the evidence," Greenspon said. "Let them defend the propriety of their actions."

Senate lawyer Maxime Faille urged the court to dismiss the appeal. Separation of powers, he argued, is a constitutional cornerstone.

"Parliamentary privilege is one of the ways the fundamental constitutional separation of powers is respected," Faille said.

Both Chief Justice George Strathy and Justice James MacPherson queried whether such privilege is absolute, even if the Senate were acting for a "corrupt purpose" as Duffy alleges.

"The action here is that the conduct of the executive branch poisons both the Senate process and the resulting decision relating to Sen. Duffy," MacPherson said. "If that's true, is there no remedy?"

Faille countered that the Senate is the "sole judge" of whether it follows its own rules. Duffy's suspension and request for reimbursement falls entirely within Senate purview, and allowing the courts to review internal Senate decisions would be an unprecedented undermining of its independence, he said.

"We are dealing with a Senate decision regarding the use of Senate resources by a senator," Faille told the panel, which also includes Justice Mahmud Jamal.

Duffy's side believes his case was given a boost by a top court ruling in the United Kingdom last fall that Prime Minister Boris Johnson had acted illegally when he prorogued the British parliament.

The U.K. decision, Faille argued, was a review of executive action -- not parliamentary proceedings -- something courts have done for centuries.

But Greenspon said in closing that asserting privilege if the underlying conduct is unlawful defies logic, fairness and the rule of law.

"This is an important case and we'll reserve," Strathy said.

This is a corrected story. A previous version said lawyer Maxime Faille acted for the government.