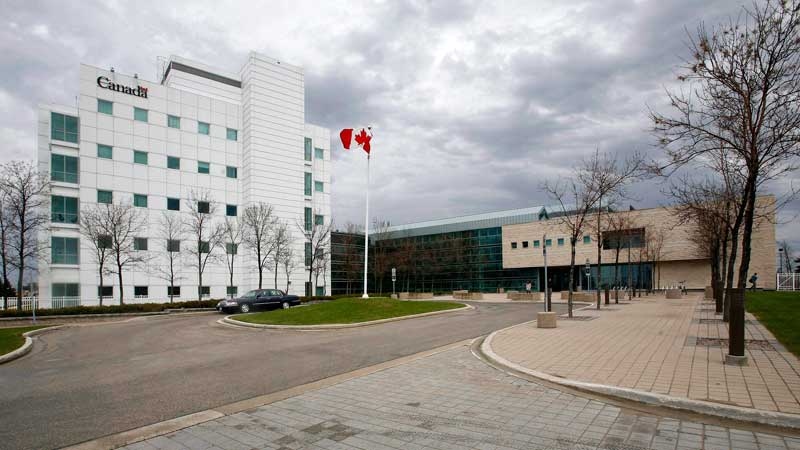 The National Microbiology Laboratory in Winnipeg is shown in a Tuesday, May 19, 2009 photo. (THE CANADIAN PRESS/John Woods)

The Official Opposition has flatly rejected a Liberal proposal to create a new House of Commons committee to comb through sensitive material relating to the firing of two scientists at Canada’s highest-security laboratory.

“Your government’s efforts to find a suitable arrangement are many months too late,” said Conservative House leader Gerard Deltell in a letter sent Wednesday, responding to a proposal from Government House Leader Mark Holland.

Deltell’s letter outlines the reasoning for their refusal to sign on to the Liberal proposal, including that in their view, past calls to produce the documents have included adequate safeguards and skepticism over the Liberals’ intentions given what he called a “pattern of behaviour concerning parliamentary accountability.”

The Conservatives have now asked House of Commons Speaker Anthony Rota to rule that the Liberals continued refusal to disclose the documents is in breach of parliamentary privilege. Should Rota agree, they’ve stated an intention to present a motion calling for the seizure of the documents.

Amid an impasse over how to handle the documents, the Liberals had suggested that while information best held with National Security and Intelligence Committee of Parliamentarians (NSICOP), they would be open to a separate body forming that would be advised by a panel of three former senior judges, to review the materials within a secure government facility.

Opposition parties have long fought for answers as to why Dr. Xiangguo Qiu and Dr. Keding Cheng were escorted out of Winnipeg’s National Microbiology Laboratory in July 2019 and terminated 18 months later by the Public Health Agency of Canada (PHAC).

There are also concerns and questions about whether their terminations are connected to the fact that four months before their removal, Qiu sent a shipment of Ebola and Henipah viruses to China's Wuhan Institute of Virology.

The push for documents has been ongoing for months, including in court, and saw the former head of PHAC admonished formally in House for failing to turn them over when ordered to.

The Liberal proposal would allow this new group of MPs to gain access “with appropriate safeguards,” to unredacted documents pertaining to the questions surrounding the laboratory in Winnipeg.

The committee would be formed under a similar structure as the one used by former prime minister Stephen Harper in 2010 to resolve calls by MPs who wanted access to documents related to the treatment of detainees in Afghanistan.

The Conservative position is that the two situations and the context in which the hundreds of pages of lab documents are being asked for is vastly different than when the thousands of pages were provided to Parliament under the then-Conservative government.

Despite the Conservatives’ rejection, Holland told CTVNews.ca on Wednesday that he’s “disappointed,” but is still optimistic the Liberals could come to a “reasonable and fair” understanding, with the backing of the Bloc Quebecois and New Democrats to form the committee in a way that doesn’t compromise national security.

“I'm beginning to think frankly, that the Conservatives don't want to see these documents. We've made an offer first for them to be seen at the National Security [and Intelligence] Committee of Parliamentarians, that was rejected. Now they're rejecting an offer to use the same system they themselves used,” he said.

“I think they're going to have a hard time explaining to Canadians on the one hand, their demand to see documents and their pretense that we're hiding them and yet, on the other hand, refuse to join a committee that actually lets them look at the documents,” said Holland.