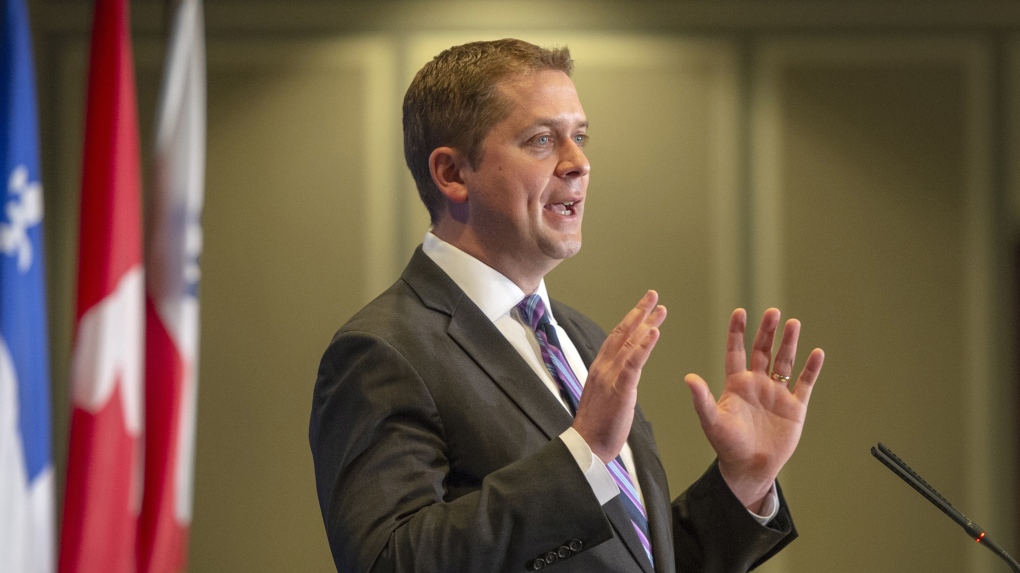 Conservative Leader Andrew Scheer addresses the Montreal Council on Foreign Relations Tuesday, May 7, 2019 in Montreal. Scheer says he will move Canada's Embassy in Israel to Jerusalem from Tel Aviv if he becomes prime minister. THE CANADIAN PRESS/Ryan Remiorz

“I’m very committed to de-politicizing the entire procurement process,” Scheer said. This commitment comes on a week that saw many headlines about the collapse of the case against Vice Admiral Mark Norman, which was centred on the alleged leak of cabinet secrets in favour of Quebec-based Davie Shipbuilding in relation to a $700-million shipbuilding contract, and an apparent Liberal backtrack on fighter jet procurement.

“I am sincere in trying to bring opposition parties in to the procurement process early so we can take some of the politics out,” Scheer said in an interview on CTV’s Question Period.

During the 2015 campaign, the Liberals said they would not buy the F-35 fighter jet and launch an open process to procure a “lower-priced” replacement for the CF-18s. This file has evolved over the four years since, and now the government is changing the procurement process to allow Lockheed Martin to submit the F-35 jet into the bid.

“Every election cycle it’s easy for an opposition party to find billions of dollars in savings by going after a big-ticket item like helicopters, or jets, or heavy-lift aircraft and all that does is it punts the ball down the field, it leads to further delays,” Scheer said.

Scheer has begun holding a series of keynote speeches in which he is unveiling his “vision” for the country and putting forward broad policy ideas that his party will be putting into their election platform. The first was on foreign policy, where he stated his intent to join the U.S. ballistic-missile defence program, seek to strengthen ties with the United States, and push back harder on China.

He also spoke about wanting to upgrade current Canadian assets like submarines, and fighter jets but did not speak to how much this could cost, or where the money would come from.

Scheer said he will have more specifics “closer to the election campaign,” but said that taking the politics out of the decision making processes for purchases of this scale will be a way to bring the cost down.

Would ban Huawei from 5G network

Scheer also said that he would not allow Huawei -- the largest telecommunications equipment manufacturer in the world -- to participate in the development of Canada's next-generation 5G wireless network.

“When it comes to Huawei the Chinese government has already acknowledged that they’ve been involved in cyber-attacks against Canada, there are major concerns about the security of our 5G system and the relationship between Huawei and the government of China,” Scheer said.

“My fundamental first priority is to protect the personal privacy of Canadians and the integrity of our national defence and security institutions and that’s why I am so concerned about Huawei’s participation in the new 5G network,” he said.

Other countries, including the U.S. and Australia, have blocked Huawei technology, while the federal government has yet to decide whether it’ll allow the company to join Canada’s 5G network, citing an ongoing national security review.

Scheer, citing the Canadians detained in China and the ongoing trade tensions over canola, said that Prime Minister Justin Trudeau’s approach is not working.

“I think we need to show some strength and some resolve and start to stand up for our best interests,” Scheer said.

This week coming, Scheer will be in Toronto speaking to a crowd at an Economic Club of Canada luncheon about his plans for the economy, and by the end of June we’re promised his climate change plan.

It is yet to be seen what Scheer's approach to the environment will be, after promising and later walking back a pledge to present a plan that meets the Paris targets without a carbon tax.

Asked again whether the plan will include a path to meeting the targets, Scheer said: “Our plan will give Canada the best possible chance of doing that. Our plan will be workable, it’ll be realistic, it’ll be a real plan to achieve those reduction targets.”

“I suspect this will be the most comprehensive policy announcement by an opposition party in Canadian history,” Scheer said.